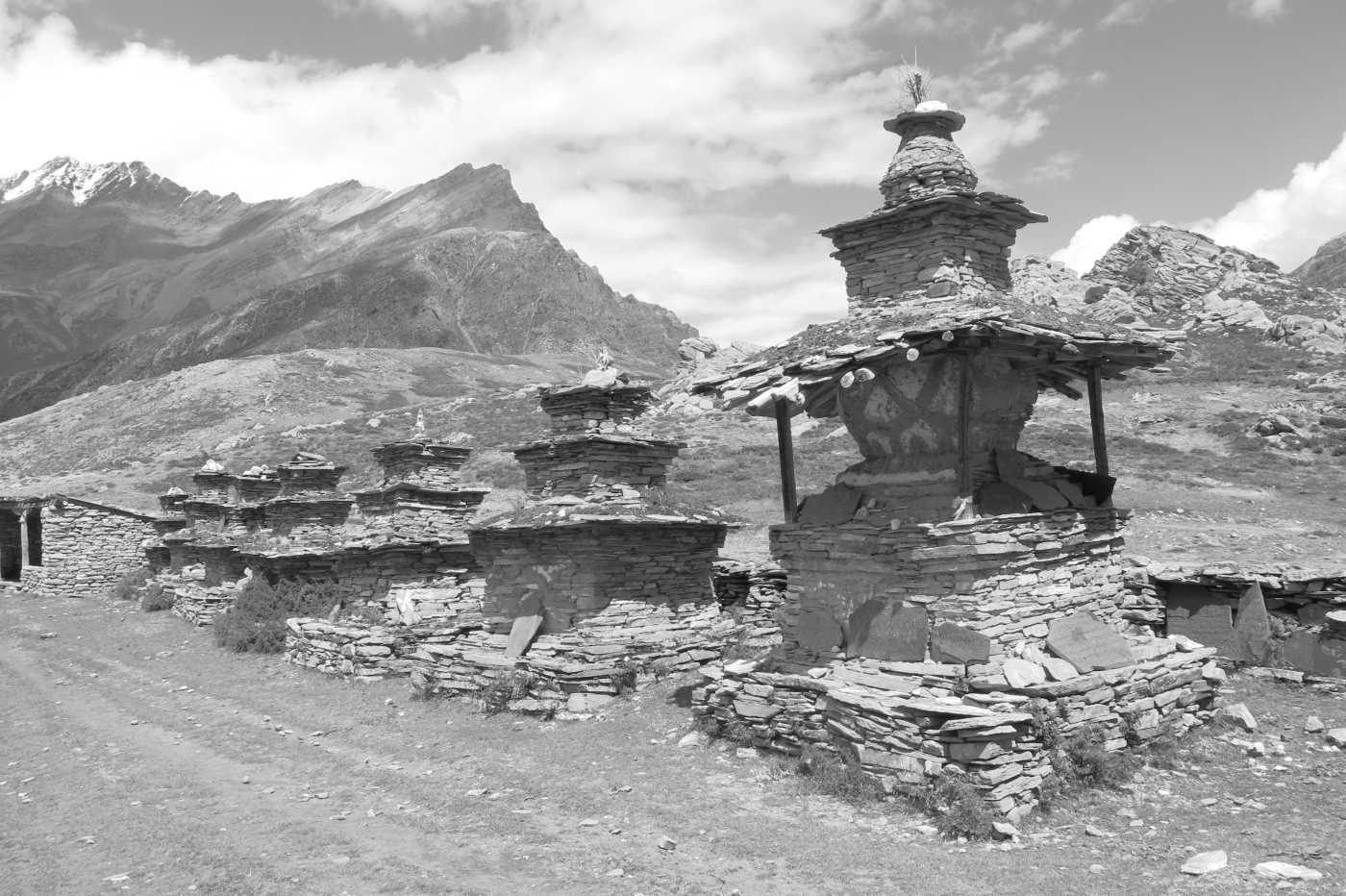 It has been a while since I last updated my website and a lot has happened since then. I went trekking to Naar and Phu with my friend Baba and discovered thatÂ hiking in all those areas isÂ beautiful and not in the slightestÂ affected by the earthquake; I biked to the Last Resort near the Tibetan border with my friend Jo and was reminded how beautiful this country was; Nepal past its long-awaited constitution on 20 September, which has created some agitation in the west of the country due to some shortcomings in the document. The Medhesis, who liveÂ in the far west of the country, as well as women feel Â disadvantaged in this new document.

But let’s start one thing after the other: whenÂ I got back to Kathmandu Â from Broad Peak I had a few prettyÂ tough weeks. I felt incredibly weak – almost lethargic – and everything seemed a big chore for me. For those who know me this is pretty unusual for me.Â Fortunately, there was the work for Miss Hawley, which got me out of the house and made me meet people. And even though the number of expeditions had definitely gone down since last year,Â I guess the number of Manaslu teams was prettyÂ unchanged.

So while I was in my lethargy still trying to recover from Broad Peak, my friend Baba from Addis Abeba (well, she is Swiss but is living there at the moment) got in touch wondering whether I would be up for a week’s trekking. That was just what I needed. I contacted my friends Clare and Mads of Himalayan TrailsÂ and after carefully thinking about where to go, we came up with a trip to Naar and Phu, which is east of the Annapurna Circuit.

It turned out to be a wonderful trek and despite the monsoon, we were trekkingÂ in the rain shadow and only encountered a few hours of rain. Our trek started with a driveÂ to Kote on the Annapurna Circuit and I must say that this was probably the most challenging part of the journey. “I think a lot of my friends would not be able to do this,” Baba said when we were driving along a very narrow trail with the abyss to our right. And of course it was tough on our sitz bones asÂ our whole bodies got shaken to the ground while the jeep was edging its way over huge boulders. After about eight hours in the car, our drive was actually cut short by the driver, who thought that he could get through this deep-looking river and even though he checked by phone whether this section was passable we got stuck and water flooded into the car in no time. So we peeled ourselves out of the jeep and walked the last 20 minutes to Koto in the dark.

When we leftÂ Koto the next morning and veered east towards Meta and then Phu, we entered a new world. The trails were good to walk onÂ leadingÂ us through the most amazing scenery towards the ancient village of Phu, which borders onto the Kingdom of Mustang. We did not see another trekker during the whole six days and utterly enjoyed meeting the locals, eating their food and staying in Â basic but very clean and comfortable accommodation. “I think I have seen the cleanest toilets here in the whole of Nepal,” Baba observed. “Nepal simply never disappoints,” she added.

During our rest day in Phu we trekked up to Himlung (7,126m) base camp, where a Swiss Kobler & PartnerÂ expedition was currently climbing. We were hoping to get some Swiss Roesti or a cheese fondue for lunch but we were unlucky as the team had just left for Camp 1. However, the kitchen team gave us aÂ hot drinkÂ and after having imbibed the stunning landscape, we ambled back down to Phu, where Baba and I together with our guides Pemba and Pasang did some CORE moves in the kitchen. Of course, to the amusement of all the locals.

TheÂ next day we stayed in the Naar Phedi Monastery, which was solely inhabited by women and it was lovely to sit in their smoky kitchen and shareÂ a good Dhaal Bhaat (Nepal’s staple diet of rice and lentils) with them. The following day we meandered up to Naar, which is another ancient villageÂ and it was goodÂ to see that a lot of construction was going on there.Â Obviously the locals are getting ready for tourists and if you are looking for a week’s trek I can only recommend it.

The last day of our trek took us over the 5,200m-high Kang La pass before we dropped back onto the Annapurna Circuit from where we took a jeep back to Besisahar and then back to Kathmandu. The drive back through the gorgeous landscape dotted with tiny villages reminded me why I loved this country so much. And it was good to see that people wereÂ rebuildingÂ their houses, which were damaged duringÂ the earthquake that happened earlier this year. 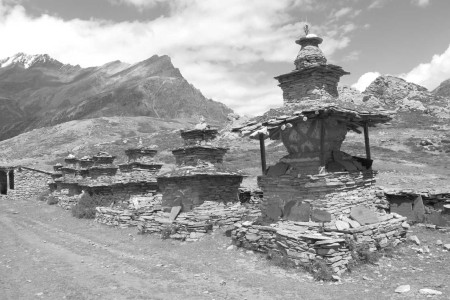 On yer bike to the Last Resort

The drive from Beshisahar to Kathmandu also made me realise that I missed my long bike rides to the Last Resort, which is exactly 100km east of Kathmandu towards the Tibetan border. So I was very pleased when a week after I had come back from my trek, my friend Jo asked me if I wanted to join herÂ to cycle to the resort.

Our ride took us through stunning green fields along the Bhote Kosi river and I felt energised and happy sucking in the beauty around me. However, as our journey took us through Sindupalchowk, which was one of the most affected districts in the earthquake, we were also faced with the destruction, especially in the otherwise buzzing border towns of Lamusangu and Bharabise. With the road from Tibet being closed due to the earthquake damage, these towns are not only facing huge reconstruction work but have also lost theirÂ trade with China.

Unfortunately, the resort, which features bungy jumping, a canyon swing and a lot of green space to relax and breathe fresh air, was also heavily affected byÂ the earthquake. However, when Jo and I got there after about six hours of riding in the stifling heat, we were greeted by an enthusiasticÂ team, who were working on rebuilding the resort. “We are actually adding some value now,” said Bishnu Neupane, one of the co-owners. “We are now building a wrench to haul the people back up after the jump. It saves them having to slog up the steep hill.”

The progress they had made was amazing and they are aiming to offer their services to tourists again in mid-October.

During ourÂ dinner, which consisted of the most delicious Dhaal Bhaat, we met a real ‘bungineer’, who was brought in from New Zealand to install the wrench. “There are actually only two of us all over the world,” said the bungineer, who only gets to spend a few weeks at home in New Zealand as his job takes him all over the world. It made me think to start a new career as a bungineer due to the bigÂ niche in theÂ market, however, the thought of having to jump off all these bridges put me off and I guess I will remain a journalist.

As the ride had admittedly exhausted us a bit, Jo and I collapsed in our safari tent at 9pm and slept until the pounding rain woke us up the next morning. And even though we had the best intentions to bike back, neither of us could actually face the rain as well as the 1,000m ascent from Dholaghat to Dhulikel, so we decided to take a bus back to Kathmandu.

“We were actually lucky that we did not go to the Last Resort a fewÂ days later as we probably wouldn’t have been able to find a bus with fuel to get us comfortably back to Kathmandu,” Jo said duringÂ our cultural morning run that took us from Durbar Square to Swayambu a few days later. And I guess she was right as about a week ago, essential goods stopped coming in from India due to controversies over the new Nepal constitution.Â Nepal accuses India of having imposed a blockade, however, India denies it saying that the flow of trucks was normal and the ‘blockade’Â did not come from their side.

The biggest problem is the supply of fuel and cooking gas. “I wanted to have lunchÂ at Bhumi’s restaurant in Lazimpat and they only had two options on the menu as they had run out of gas,” my friend Sascha, who is currently staying with us, told me. And on Thursday, the Nepal government announced that no fuel was to be distributed to private vehicles. Over the past few days, queues at petrol stations have been kilometres long and some of the cab drivers had to wait for 30 hours to get 10 litres of petrol. 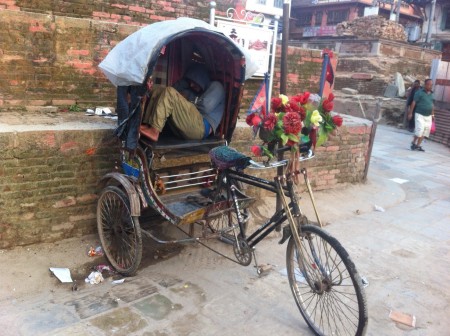 Some international airlinesÂ have already cancelled their flights to Kathmandu due to the fact that they are unable to refuel at Tribuvhan International airport and people are complaining that the prices of commodities have risen significantly. However, according to the English daily newspaper The Kathmandu PostÂ 150 trucks got through the border on Thursday morning, indicating a relaxation on the blockade.

So where does this leave Nepal? It has been just over five months that two earthquakes shook the Himalayan nation and Nepal still has a long way to go to recover from it. International aid is welcome, however, what Nepal needs is a solid income from tourism and after having worked hard to convince the foreign offices of some countries to relax their travelling warnings (thanks Jo!), this latest situation will not really convince people to come back and holiday here.

However, my most recent trips both to Naar and Phu and to the Last Resort have shown me once again, why I enjoy living here. So despite all this bad news surrounding Nepal, please do not forget that it is still a beautiful and worthwhile country to visit :-), which is open for tourists and if planned carefully, you will have a wonderful trip!

Running, rambling and roaming for expeditions

Biking in Yunnan Province in China