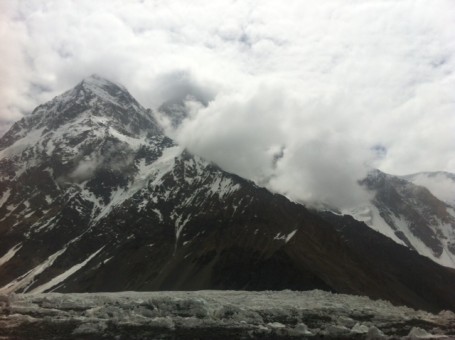 It seems as if I have written similar entries in previous blogs but I guess we forget very quickly what mental challenge climbing an 8000m peak is. But let me start from scratch.

On Monday morning several avalanches came down below camp 1 on Broad Peak. Unfortunately a few climbers were caught in the snow masses and sadly one Pakistani high altitude porter died and one foreign climber was seriously injured. It was very unfortunate that the group had opted to go up that morning given the fact that it had rained and snowed all night.

“With the warm temperatures and the rain the old snow just slipped off the underlying ice, ” Russell explained during our meeting on that morning. Several of our Sherpas were at camp 2 and 3 on K2 on Monday morning but when Russell realised that the precipitation had been harder than expected during the night, he called them down and they were safely back at base camp by about 10am. During the course of the day we heard that the injured climber was suffering an open dislocation of her tibia and that she was looked after by a Spanish doctor after she had been brought down and put in our deposit tent near crampon point.

As the weather in Skardu has been rainy and cloudy, the Pakistani military helicopters were unable to fly on Monday or Tuesday to evacuate the injured person. For this reason, our expedition doctor Dick and some of us carrying medical supplies went down to broad peak crampon point to see whether we could be of any help. The Spanish doctor Anna seemed quite relieved to get some support from Dick as well as our member Brook, who was also able to lend a hand as he is a paramedic. 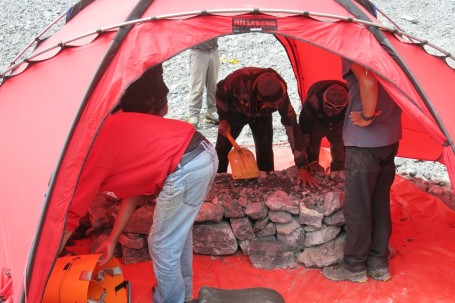 My little contribution was to move some rocks to make a nice platform for a bigger tent, where the patient was moved into and looked after by the medical team. “We actually performed an operation in there,” Dick explained. “We administered a general anaesthetic and relocated the tibia as much as we could,” he said after a long and tiring day. However, the leg needs urgent medical attention and we are all keep in our fingers crossed that the clouds in skardu will lift and the heli will be able to fly.

Hurry up and wait

As far as our expedition is concerned, Russell has asked all of us to be patient and wait for the conditions to improve. There was some climbing activity over on broad peak on Wednesday morning, however, as the snow around the col is said to be pretty deep, it still needs some man and woman power to break the trail. “The weather window also does not seem long enough and with the warm temperatures prevailing, I think it’s still too dangerous,” Russell explained during our breakfast meeting.

Of course the waiting game is hard for a lot of our members, especially when the mountains seem so calm and friendly at such a fine day as today. I also don’t know what the other teams are doing but some of them seem to have continued the search for the missing Pakistani climber. There are some rumours that a few groups are trying for the summit on 24 July but this is not confirmed yet.

I guess that we will probably sit out the bad weather, which is predicted from 27 to 30 July and then hopefully try to go for the summit at the beginning of August.

Up until the I will try to keep up the good spirits in the camp, however, it does become quite a challenge when the days just go by with very little to do.

But as the weather and conditions have shown, climbing in the Karakoram is a lot less predictable than climbing in the Nepal Himalaya and in order to be safe we will have to be patient and just enjoy the days on the Baltoro glacier.

I will keep you posted.

Leave a Reply to Mohammad