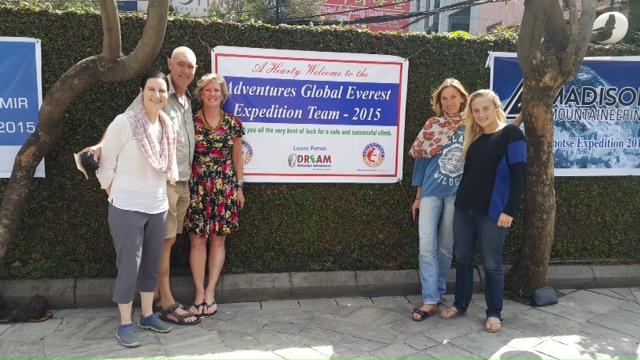 One of the teams going to Everest South

It is 18th of April. Exactly one year ago today, I walked into Everest Base Camp already knowingÂ that a huge avalanche had come down the West Shoulder of Everest killingÂ more than a dozen Sherpas. I remember seeing the heliÂ flying up and down the Khumbu Icefall retrieving the lifeless bodies of the Sherpas onÂ a long line. I remember thinking: “This season can’tÂ possibly go on.” A day later, I flew to Makalu Base Camp still unsure whether I actually wanted to climb another big mountain after what I had just seen;Â however, a week onÂ we were back in businessÂ getting on with our climb.

One year on,Â many Sherpas are back on Everest as “Climbing is what Sherpas do”, Â Madison Mountaineering’s Sirdar Phurba Sherpa told Alan Arnette, who is currently on his quest to scale Lhotse, the 4th highest peak in the world. Several Pujas (Buddhist ceremonies) wereÂ held at Everest Base Camp on the sad anniversary of the tragedyÂ and the temporary village was reported to be somber and quiet. AccordingÂ to the Himalayan Times, some of the promises made by the Nepal MinistryÂ of TourismÂ after the avalanche hit have yet to be fulfilled. “Most of the agreed plans, including setting-up a memorial park in Kathmandu and establishing a welfare fund to support families of support staff and guides, have not yet materialised,â€ Ang Tshering, the President of the Nepal Mountaineering Association (NMA)Â told the daily paper.

How this Everest season will panÂ out remains to be seen, however, a strange weather system coming from India has disrupted the usual stable weather bringingÂ lots of snow to the Himalaya, and huge amounts of rainÂ to Kathmandu, which is rather strangeÂ at this time of year. “The snow has delayed us quite a bit and other than the Icefall doctors, who have prepared the route, nobody has been all the way through the icefall yet,” Russell Brice of Himalayan Experience told me over the phone. He also said that Sherpas as well as expedition operators were very disappointed by the Nepal government’s decision not to allow helicopters carry the rope needed for fixing to Camp 1. “The Sherpas are naturally worried about crossing the icefall,” he continued. “If we could fly the many kilometres of rope to Camp 1, it would cut about 70 trips through the treacherous icefall and would make the Sherpas’ lives easier and safer.”

The snow has also thwarted other expeditions’ plans and some teams are having a hard timeÂ reaching their base camps. The Cho Oyu team of the German outfitter Amical reported that their yaks were unable to get to Advanced Base Camp due to theÂ snow.

As far as finding and interviewing expeditions in Kathmandu is concerned, Saturday, 18 April, was the first day when I didn’t have toÂ run around on my bicycle finding dozens of teams, who had been coming in non-stop for the last three weeks. “I guess I am no longer as good at my job as I used to be. I never used to miss expeditions,” Miss Hawley respondedÂ when I told her that I had accidentally bumped into an expedition she had beenÂ supposed to interview. “No, Miss Hawley,” I replied. “I think it is due to the fact that it is no longer physically possible for us to catch every single team. There are just too many.” I remember being very upset when I missed a team at theÂ very beginning ofÂ my work for the Himalayan Database in 2004. However, 11 years onÂ the number of expeditions has significantly increased and with only Miss Hawley, Jeevan Shrestra and myselfÂ with the occasional but great help of Michelle Bostwick it has become almost impossible to cover every single team.

Just as in the previous years, most teams are heading to the South side of Everest andÂ the Nepal Ministry of Tourism saysÂ itÂ has issued 347 permits forÂ Everest, with 125 of them from the previously shortened season. It’s a slight increase from the 334, who were given permission last year. The North side is seeing more climbers than last year with numbers of foreign climbers up to 200 from about 100 in 2014.

As far as other mountains are concerned, there have been very early summits on Annapurna 1, the 10th highest mountain in the world. Thirteen climbers were reported to have reachedÂ the top on 24 April, however, two very good and technical climbers had to pay their feat withÂ their lives: Finnish climber Samuli Mansikka and Pemba Sherpa sadly fell to their deaths during the descent. A few expeditions remainÂ on Annapurna 1 waiting for the snowÂ to stop and the weather window to open. With about 40 to 50 climbers, Makalu is quite busy again this year whereas I have not yet met one single expedition who is attemptingÂ Kangchenjunga (however, thereÂ could be one that I missed). Dhaulagiri, Cho Oyu and Manaslu seem to have the usual amount of climbers for the spring season.

As most teams have leftÂ Kathmandu andÂ my busy life hasÂ calmed down a bit, I am going back to Europe to spend some time with my mum. For those who are wondering how she wasÂ getting on after that nasty flesh-eating bug had attacked her, I am very happy to tell you that she is doing incredibly well. My good friend Dr Helen Clements from South Africa, who used to work at CIWEC clinic here in Kathmandu and who was a real gem during the time when I was trying to get my mum repatriated toÂ Germany thought she was incredible. “Your mother is a medical miracle. I still can’t believe how well she is doing,” she said when I told her that my mum was doing the bookkeeping, surfing the internet, baking cakes and walking around the flat without the walker. She has certainly not lost her joy for life and I am very proud of her!

During my stay in Europe, I will also go to the UK for a few days and run a classic 10-mile run in Bern, the Grand Prix.Â Well, after having done 52 kilometres here in the Kathmandu Valley a couple of weeks ago, this will only be a warm-up ;-).

As we are expecting most expeditionsÂ to startÂ coming back to Kathmandu around 20 May, I will returnÂ on 16 May in order to interview them about their expeditions. I really hope that the 2015 climbing season will be a good and successful one withÂ everyone comingÂ back safe and sound.