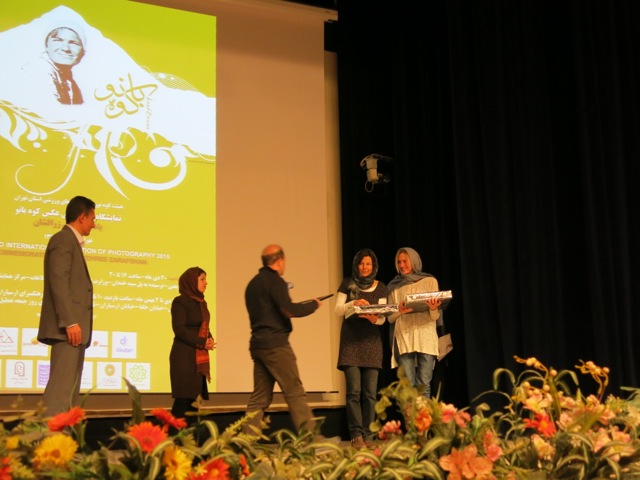 Great atmosphere during an amazing event

“Your presentations have changed our lives,” Ms LalehÂ toldÂ Gerlinde and me after having done our slide shows at theÂ Koohbanoo exhibition in Iran. “It has beenÂ such a pleasure to have you here and we are all very happy,” she continued. But the pleasure isÂ ours and both Gerlinde and IÂ areÂ very honoured to have gotÂ the chance to motivate and inspire Iranian female climbers during this event.

About a year ago, the Iranian high altitude climber Parvaneh Kazami askedÂ us whether we would be interested and willing to participate in a photo exhibition in January 2015. The exhibition dubbed ‘Mountain Lady’ was in honour of Iranian female climbers and would take place in Tehran. Both Gerlinde and I were fascinated by the thought of visiting IranÂ and getting the chance to find out more about the life and the mountaineering scene there as well as meeting very skilled and motivatedÂ Iranian female climbers. AndÂ even though we have only been here for less than 48 hours, it has already been well worth it. “I can’t believe how much we have seen and experienced in such a short time,” said Gerlinde looking puzzled about the fact that we only left Germany two days ago.

Arriving at Imam Kohmeini Airport at 5am was already the best indication of the welcoming and hospitable Iranian people. “Khosh Amadid,” said the friendly official at the immigration desk with a big smile and his words meaning ‘Welcome’Â almost surprised usÂ as weÂ seem to remember immigration officers to be rather grumpy.

The next amazing encounter was the welcome delegation of nine climbers, who did not shy back from getting up at the crack of dawn to receiveÂ us to the Iranian capital with open arms and two gorgeous bouquets of flowers. “I cannot believe you are finally here,” said Pary telling us that the Iranian climbing community had been waiting for our visit and counting the days. We were already overwhelmed!

After having rested for a few hours in Pary’s home and triedÂ hard to getÂ our head scarves right, Pary and her husband Arman took us to the Shahid Ghandi Hall, where the Tehran climbing community and other interested people had gathered to listen to speeches, marvelÂ at mountaineering picturesÂ and exchange stories and experiences. The exhibition was in memoryÂ of Mehri Zarafshan -Â an impressive Iranian climber, who opened a few new routes in the 50ies and 60ies and went down in history as one of the greatest female climbers ofÂ Iran.

The atmosphere in the hall was amazing and the air was buzzing with enthusiasm and awe, and we both felt the vibe very strongly. When Gerlinde literally reached the summit of K2 during her presentation, she had tears in her eyes and her voice almost failed her. “I honestly cannot remember theÂ last time I criedÂ during this presentationÂ but the energy is incredibly special and the closeness of the people has touched me so much that I was overcome by my own emotions,” said Gerlinde thanking the organisers once again for havingÂ got the chance to take part in this event.

After a short break I did a brief introduction to Miss Hawley, her passion for mountaineering as well as our work for the Himalayan Database Â before we showed Allison Otto’s documentary “The Keeper of the Mountain”Â -Â a great film talking about the life and work of Miss Elizabeth Hawley, theÂ great Himalayan chronicler. “Even though she is not a climber, nobody would have reached the top without her,” read one of the Facebook entries about the exhibition. “She is a summit herself!” it continued.

When the ceremonyÂ came to an end after about five hours, which did not seem long at all, both Gerlinde and I were once again touchedÂ by the enthusiasm and genuine kindness of the people, who were incrediblyÂ keen to talk to us or just have their picture taken with us. “I have a very strongÂ feeling that we really moved the people and achieved what we came hereÂ to do, which is inspire these women,” said Gerlinde signing yet another postcard while receiving one of the many presents the people had prepared for us. However, it’s not the presents that made this event so specialÂ – it’s the kind words and emotions we encountered over the past 36 hoursÂ – Â they areÂ almost too overpowering for words!

And thisÂ is just the beginning of a 10-day-trip to Iran. On Monday, weÂ have organised to teach aÂ CORE class to about 50 women and we are very much looking forward to it. After that, we will be in the hands of ourÂ wonderful friend Pary and we are sure that she has more exciting things in store for us – so watch the space.

Mountains in my heart