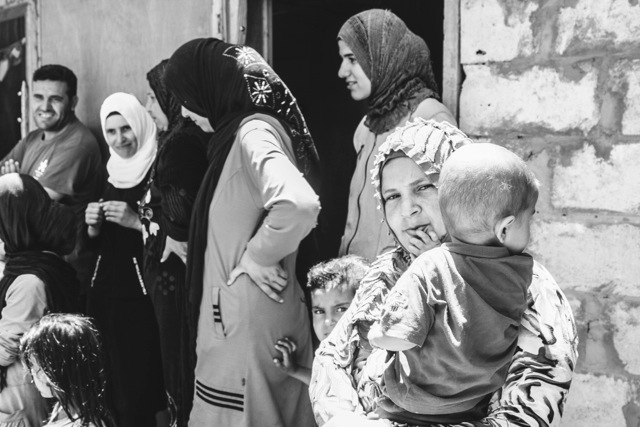 Many Syrian women, who have lost their husbands or their sons are grateful to Abou Hassan and Nofa (Samer Rawadi)

I have been wanting to update my site for a long time, however, work and travels have prevented me from doing so and now I am already back in Kathmandu helping Miss Elizabeth Hawley and getting ready for my next adventure, which will be Shisha Pangma (8,027m) in Tibet.

After having had a rather rainy June and July in Bern, Switzerland’s Humanitarian Aid sent me to Jordan and Lebanon for two weeks to look at some of our project and write human interest stories about our beneficiaries, who are mainly Syrian refugees.

Getting the chance to speak to the people, who have been through a lot of grief and fear and have lost almost everything in their lives, was wonderful but of course not always easy. However, despite the pain I also encountered optimism and hope – and a lot of kindness.

For example, the small country of Lebanon with a mere population of four million people is currently hosting more than 1.1 million Syrians, which makes every fourth person in Lebanon a Syrian refugee. According to the United Nations Relief and Works Agency for Palestine Refugees (UNRWA), Lebanon also hosts 455,000 Palestine refugees, most of which live in the 12 official camps. For this very reason, the Lebanese government did not want any more camps for the refugees from Syria; most of them live with host families, who have taken them in as an act of kindness.

I was lucky to meet such a family and had I not seen it with my own eyes, I would not believe it. Abou Hassan and his wife Nofa, who live in Akroum in northern Lebanon, are hosting 70 refugees from Syria. When they took in the first refugees they thought that the crisis would be over in a few months, but little did they know and some of the refugees have lived with the couple for more than two years now.

“If I had more, I would give more,” Nofa told me with tears in her eyes. When I asked her how she and the family coped with the fact they had no more privacy, she said: “I can’t throw them out. Where should they go?”. I would say that these people are true humanitarians, even though it is not always easy for them. “Sometimes I leave the house in the morning and I don’t want to come back in the evenings,” Abou Hassan told me quietly.

The story about Abou Hassan is not an isolated one, and in order help these families, Switzerland launched a programme that provides the Lebanese families with some cash support for the additional costs incurred.

Other life
After my two weeks in the Middle East, which was very different to my life here in Nepal, I had a week-long stopover at my mum’s in Bavaria before I came back to Kathmandu, where the autumn expeditions are slowly trickling in – mainly going to Cho Oyu and Manaslu.

On 4 September, I will leave Nepal for my expedition to Shisha Pangma – the smallest 8,000m-peak – in Tibet. As Russell Brice is going back to Manaslu, the 8th highest peak in the world, I have opted to go with Kari Kobler’s outfit and I am very excited.

I will try and update my website as often as I can, however, as we will probably have limited internet access, I might be sending more tweets, which you can also find on the right side of this site.

Thanks for following my expedition and I am really excited to share my adventures with you again.

The end of the monsoon is nigh