Warning: Declaration of wp_bootstrap_navwalker::start_lvl(&$output, $depth) should be compatible with Walker_Nav_Menu::start_lvl(&$output, $depth = 0, $args = NULL) in /home/customer/www/billibierling.com/public_html/wp-content/themes/billi-bootstrap/wp_bootstrap_navwalker.php on line 22
 Billi Bierling – Journalist and Climber | Reaching the summit of Makalu

Apologies for not updating my site earlier, but I needed a few days to physically and mentally arrive back in civilisation after having been in the mountains for 47 days – 42 of which I spent at Makalu Advanced Base Camp at an altitude of 5,700m with a few climbing days thrown in.

After 7 hours climbing finally on the summit

I always feel dazed when I am dropped back into the hustle and bustle of Kathmandu. I also feel incredibly grateful for the time I was allowed to have spent in the mountains; grateful for the beauty I was faced with every morning when I opened up my tent to crawl out for my first cup of coffee; and above all the incredible view from the summit of the 5th highest peak in the world.

Summit ridge in the sunrise

Getting there was not that easy though and when, at Camp 4, we lay down to rest until 10pm on 24th May – our departure time – I was secretly hoping that the strong gales that were pounding against our tent walls would not abate and that I could stay in my sleeping bag. However, at 9pm on the dot, Suzanne started to shift around in the small tent, which we were sharing with Heidi from Stuttgart, to get ready for the climb. “Isn’t it far too windy,” I said hoping that I did not have to get out of my warm layer. “Nope,” she said, “you’d better get ready.”

I could already hear the Sherpas chatting outside and I knew that if I wanted to reach the summit of Makalu, I would have to get ready right now. Dressing for these summit days is usually quite tricky as you have to stuff everything down at the front your down suit to keep things warm or prevent them from freezing: your radio, water bottle (only one in my case), camera, power bars and everything else you don’t want to get cold.

The next thing is trying to squeeze your body into your harness followed by putting on your inner and outer boots, crampons and last but not least your rucksack. By the time I was out of the tent, most of my climbing mates had already left and after I had adjusted my balaclava and hat for the umpteenth time to prevent them from sliding down and covering my eyes, I asked Chebbi, the Sherpa who would accompany me to the summit, to help me fasten the hip strap of my rucksack.

We started at about 10.10pm and I felt a bit panicky as everyone from my team had already gone – apart from Suzanne and Lakpa, who were just in front of me. It was a gorgeous night and even though I had been worried about the wind earlier, the night had become completely calm. And so we started plodding towards the French Couloirs, which I knew would take at least four to five hours. 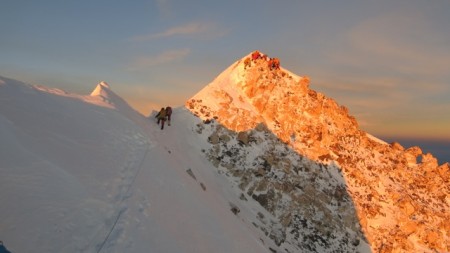 Summit illuminated by the rising sun

No reason to turn back

On our way back, two members from an American team we had been friendly with, were descending due to breathing problems and cold feet. “My left foot is really cold and even though I would love to carry on, I had better turn back as I don’t want to risk a toe,” Dave told me when I bumped into him. Seeing him going down towards the warmth of his tent at C4 at 7,590m almost made me want to turn back as well. As hard as I tried, I was not really having fun, however, I also did not find a reason to abandon my climb. “I am warm, I have no pain, I am going fairly well and I don’t have any cold extremities,” I kept on thinking to myself. “So what would I say if I turned around? That my balaclava kept on slipping into my eyes? Not a good reason.”

And so I plodded on and I remember feeling surprised when we reached the bottom of the French Couloirs, which would lead us to the summit ridge: it happened faster than I had anticipated. After having stopped to change the oxygen bottle and the batteries of my head torch, the radio came to life and I heard a Sherpa say the names Sergey, Tashi, Heidi and Pemba. “Ah, the first members of our group have summited,” Chebbi translated wiping his eyes with his flimsy woollen gloves. It was still dark when the first four members of our group reached the summit at 4am, however, they would only have to wait for another 30 minutes or so for the sun to rise.

Chebbi and I on the summit with the Nepalese flag

I had no idea that we were already close, and when we entered the final summit ridge at about 4.45am I could not believe that I had actually made it all the way to the 8,485m-high summit. The last few metres were tricky to negotiate and I was thinking about the people who had traversed this exposed ridge without a fixed rope a few days earlier. On my final metres up, I bumped into Heidi, who had initially planned to wait for me for us to become the two first German women on top of Makalu together, however, she was getting too cold and had to descend, which I don’t blame her for at all. “Billi, I would go back up with you again but having to wait for the sun to rise has made me really cold,” she said apologetically.

When we finally got to the summit, I realised that it had probably been better that Heidi had not gone back up with us as the little piece of rock representing the top of the fifth highest mountain in the world was tiny. Sitting on such a small summit (Makalu has the smallest summit of all 14 8,000m-peaks) always makes me a bit nervous, especially with a few people queuing up to get to this popular space. I could see my friend Chris Burke from Australia approaching this point as well as Randy from the States. “All my friends have deserted me so I am glad I can share the summit with you,” he said squeezing towards me.

After about 10 minutes I was on my way down again and while Sergey, Naoki, Heidi, Suzanne and all the Sherpas descended all the way to ABC that day, Rene, Jacob and I were content to stay at C2 that night as the long way across the boulders to ABC did not necessary tickle my fancy. Crawling into my tent at about 5pm made me realise, why I like high altitude mountaineering: it is the complete exhaustion that I had never ever found anywhere else. I barely managed to light the stove to get a bit of liquid into my dehydrated body before I crashed in my full gear (even with the harness on) and fell into a deep sleep.

The following day I woke up to the sound of snow tapping against my tent and all of a sudden I heard Jacob say that the three of us should descend together. “It could be a bit tricky with avalanches and I want to make sure that nobody gets lost in the white-out,” he called over from his tent. About an hour later, Rene, Jacob and I were ready to descend and I was happy that I did not have to go down on my own. It was interesting to see how much the route had changed over the past four days and how much the crevasses had opened due to the warmer temperatures. By the time, we were back at crampon point, I felt completely depleted again and it took Rene and me about three hours to do the trip that had taken us about 40 minutes when we were rested, wearing light boots, without snow on the boulders and not having a huge load on our backs.

It kept on snowing relentlessly and by the time we had made it down to ABC in time for Gyanu’s delicious lunch, ABC had turned into a winter wonderland. “I am not sure we will be able to fly out tomorrow – the weather forecast does not look too promising,” Suzanne said with a husky voice, which was probably due to the dryness of the air or the artificial oxygen.

And she was right: the snow kept on falling and after about 48 hours stuck in the snow I was asking myself when it stopped being fun. When I woke up on Wednesday morning, I could barely see the tents around me, and I started to worry that the monsoon had already started. “I just don’t know when we will get out,” said Heidi panicking that she would miss her international flight back to Germany. “At least we don’t have to go back up and clear Camp 2,” I responded to her worrying about the Sherpas who had gone back to Camp 2 at 6,600m to get the rest of the material, including tents, sleeping bags, cooking sets, etc back down to ABC.

After a day of digging out tents, trying to keep everything dry and hoping that the snow would finally stop, we were all relieved to see the Sherpas come back after a 12-hour-day. “It was very hard and we were a bit worried about avalanches up there,” said Tashi Sherpa, explaining that they had sunk into the snow up to their hips.

Tents buried in the snow

On Thursday morning, the weather looked the same, however, we could feel the warmth of the sun and when at about 11am the snow finally stopped and the sun burnt down on our ABC, we all ran towards the helipad to prepare it for a possible helicopter landing. “I will take some of our berry tang to make it visible for the pilot,” said Dr Joe worrying that the helicopter pilot would not be able to make out the helipad in the snow.

And so, we were all relieved when the first helicopter arrived at Makalu ABC at around 3pm and with the weather improving three helicopter companies managed to fly all remaining members from ABC to Lukla, where we spent the night. Unfortunately, the Sherpas of the remaining teams had to stay behind to clean up ABC, but I hope that they will be able to leave soon.

At this point, I would like to thank everyone, who helped me get to the top of this majestic 8,000-metre-peak, first and foremost the Sherpas, who fixed the rope, carried the loads, made sure we had enough oxygen and simply looked out for us; I would also like to thank our kitchen team, who fed us well and guaranteed that we would have enough energy and strength to get to the top; I would like to thank Russell Brice, who makes it possible for me to join his expeditions; and last but not least I would like to thank you for following my little adventures – knowing that there are people out there to support me makes climbing such a big mountain a lot easier :-).

Leave a Reply to Neil Briggs