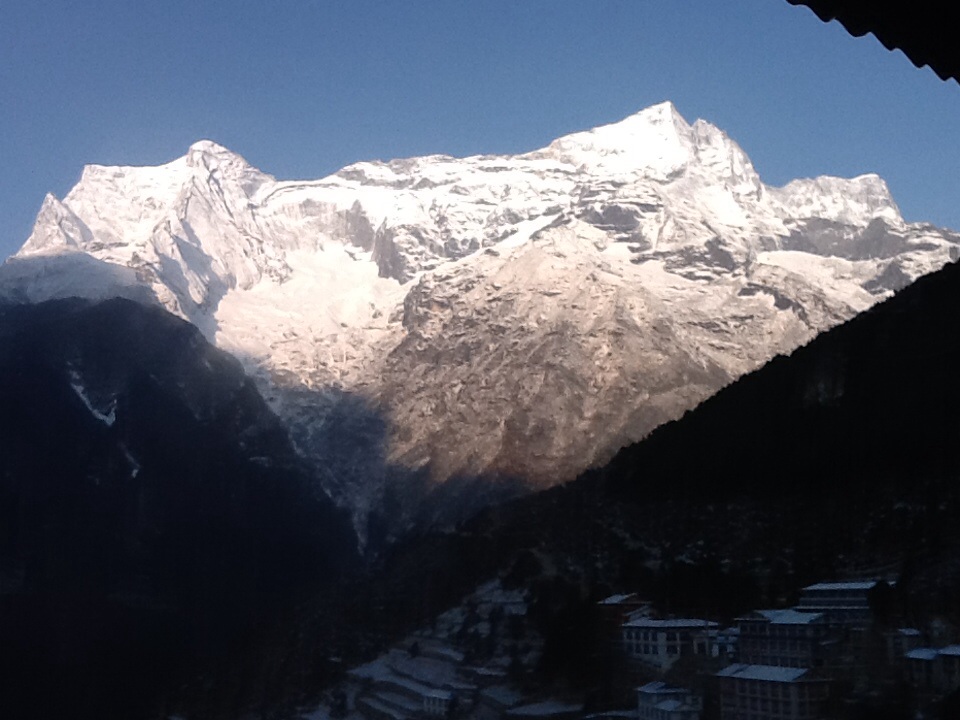 Namche Bazaar in the snow

This is just a brief update as I thought I should make the most of the Ncell 3G network in Namche before I head into internet-free terrain.

I arrived in Namche on Saturday afternoon after having been incredibly lucky to catch a flight to Lukla. The weather was already deteriorating when we were flying in, giving us a very bumpy ride in the small Simrik plane. However, about an hour after I had started walking, the rain set in accompanied by thunder and lighting so I don’t think many planes would have got it.

The traditional stop for the Everest base camp trek is Phakding, which at 2,700 metres lies at the same altitude as Lukla. However, over the past years I have always pushed on to Namche and usually have a cup of tea at Ang Tshering’s, who runs the Namaste lodge in Phakding. “Ah, you are going all the way to Namche again? Just like every year,” she said feeding me hot lemons.

After having caught up with this incredibly strong woman, who runs a huge lodge that is mainly frequented by Summit Club groups, I made my way up the notorious Namche Hill to get to the Sherpa capital at 3,300 metres. As usual, I headed for the Moonlight lodge, which is on top of the hill and is run by Natang Sherpa and his wife, who I have known for years. It is always beautiful to be welcomed here!

As I don’t want to make the same mistake as last year, when I trekked to Everest base camp in two days and caught pulmonary oedema, I decided to stay in Namche for two nights, which gave me the chance to amble up to Thame on Sunday afternoon.

Thame is a beautiful little village at 3,800 metres, which is hardly ever visited as it does not lie on the main trail. However, those who want to go over the Tashi Laptsa into the Rolwaling valley or over the Renjo La into the Gokyo valley, would come to this quiet oasis.

After having had a small pot of hot lemon to keep hydrated, which is very important at altitude, I headed back to Namche, where I met my friend Wasfia – a lovely Bangladeshi woman, who climbed Everest with my dear friend Chris Klinke two years ago. It was great to catch up and see how well she is doing. She is currently doint the Seven Summits and she has already done five – only Denali in Alaska and Carsztens Pyramide in Papa New Guinnea are left to do.

On Monday morning, I will head further up the hill to Machermo before I will get to Gokyo on Tuesday afternoon. I am really looking forward to returning to Gokyo after many years as just like Thame it is not often visited due to the fact that it does not lie on the main trail.

I spoke to Russell this morning and the plan has slightly changed, meaning that the Makalu team will no longer climb Lobuje but head to Makalu base camp by helicopter on 17 April. So I had better make sure I will catch that flight as otherwise I will be stranded in the wrong valley.

I will keep you posted as soon as there is an interent opportunity again.

Off to Rome – and a huge Thank You!

May 7th Update from Makalu