Warning: Declaration of wp_bootstrap_navwalker::start_lvl(&$output, $depth) should be compatible with Walker_Nav_Menu::start_lvl(&$output, $depth = 0, $args = NULL) in /home/customer/www/billibierling.com/public_html/wp-content/themes/billi-bootstrap/wp_bootstrap_navwalker.php on line 22
 Billi Bierling – Journalist and Climber | Back in my colourful life

Back in my colourful life

I have been back in Kathmandu for exactly one week now and I literally have not had time to stop and realise that I am actually back in my colourful life in Nepal. As I arrived back here pretty late this season I had to dive straight into my work, with Miss Hawley summoning me to her house about two hours after I had landed. “I have lots of work for you to do, so could you please be here at 9am?” she told me when I rang her from the airport. And so I did as I was told and was actually already in the Yak & Yeti hotel at 10.30am interviewing my first team for the Himalayan Database.

Most expeditions have been and gone with a few being stuck in Kathmandu on Saturday due to bad weather both in the Khumbu and in the Nepalese capital. “No fixed-wing plane was able to leave Kathmandu this morning but a few expeditions made it to Lukla by helicopter,” one trekking agent told me. 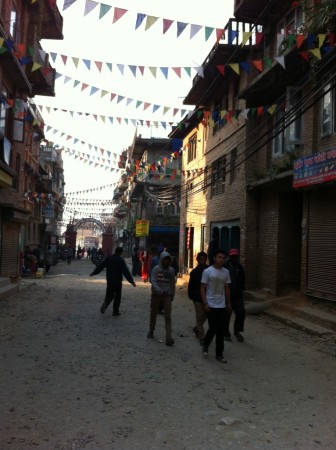 However, this will give the members of the expeditions more time to deal with the heaps of bureaucracy they are being faced with this year….not that bureaucracy is a new thing to a country like Nepal, but the Ministry of Culture, Tourism and Aviation, which is responsible for issuing permits, has come up with a few new rules. For example, up until this season only the leader of an expedition had to undergo the expedition briefing at the ministry of tourism, but this year every single member is required to attend the meeting. The idea itself is certainly not a bad one, however, the realisation could be a bit tricky given that some expeditions consist of 20 or more people and the ministry certainly does not have a reception hall to accommodate them all.

It’s really good to be back in this mad and chaotic place despite all its challenges, such as up to 10 hours of power cuts per day or streets that are jammed with so much traffic that you sometimes cannot even get through on a bicycle. It is wonderful though that I always have a place to come back to and find good friends who welcome me into their circles again even though I had not been here for a while. Kathmandu is a beautiful place with truly wonderful people.

I also got the chance to catch up with Declan Murphy of just-one.org, who is still extremely grateful to everyone who sponsored my run in Rome. It was good to meet some of his kids, one of which is Nav Raj (18), who used to live in the streets of Kathmandu and thanks to just-one.org now works as an English teacher at a private school and attends college. “It’s wonderful that we can continue our work, especially with such kind donations that came from your Rome run, and even though not every kid is a success –  the ones that are, are a real achievement for us,” Declan said looking at the impeccably clean and beautiful Swiss Franc notes I brought back from Bern. “I have never seen Swiss Francs before – aren’t they amazing?” Declan marvelled. Once again, a huge thank you to everyone who so kindly contributed to Declan’s cause.

I will be here for another week, which will be busy with meeting expeditions, sorting out my Nepal visa and running my last minute errands before I head to Lukla on 12th April. The usual trek to Makalu BC is via Tumlingtar through the Arun Valley, however, our team will acclimatise in the Khumbu and, just as Russell’s Everest and Lhotse teams, climb Lobuje East before we take a helicopter to Makalu base camp around 21 April. 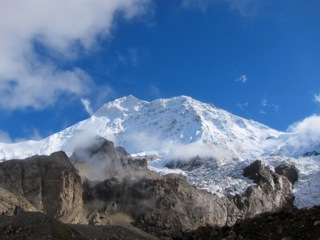 Makalu seen from Makalu base camp

Our guides will be Suzanne Hüsser from Switzerland, who I was on Makalu with in 2012, and Jacob Schmitz from the States. Other than that most of the members on our team are people I have previously been on expedition with and I am very excited to be climbing with another German woman, Heidi Sand, from Stuttgart.

We will have intermittent internet access, so I will try and update you as frequently as I can but as I will also be writing the newsletters for Himalayan Experience again, you can click here to find out more about our progress.

Sorry that this is rather short but I am just about to rush out again to interview another team for the Himalayan Database.