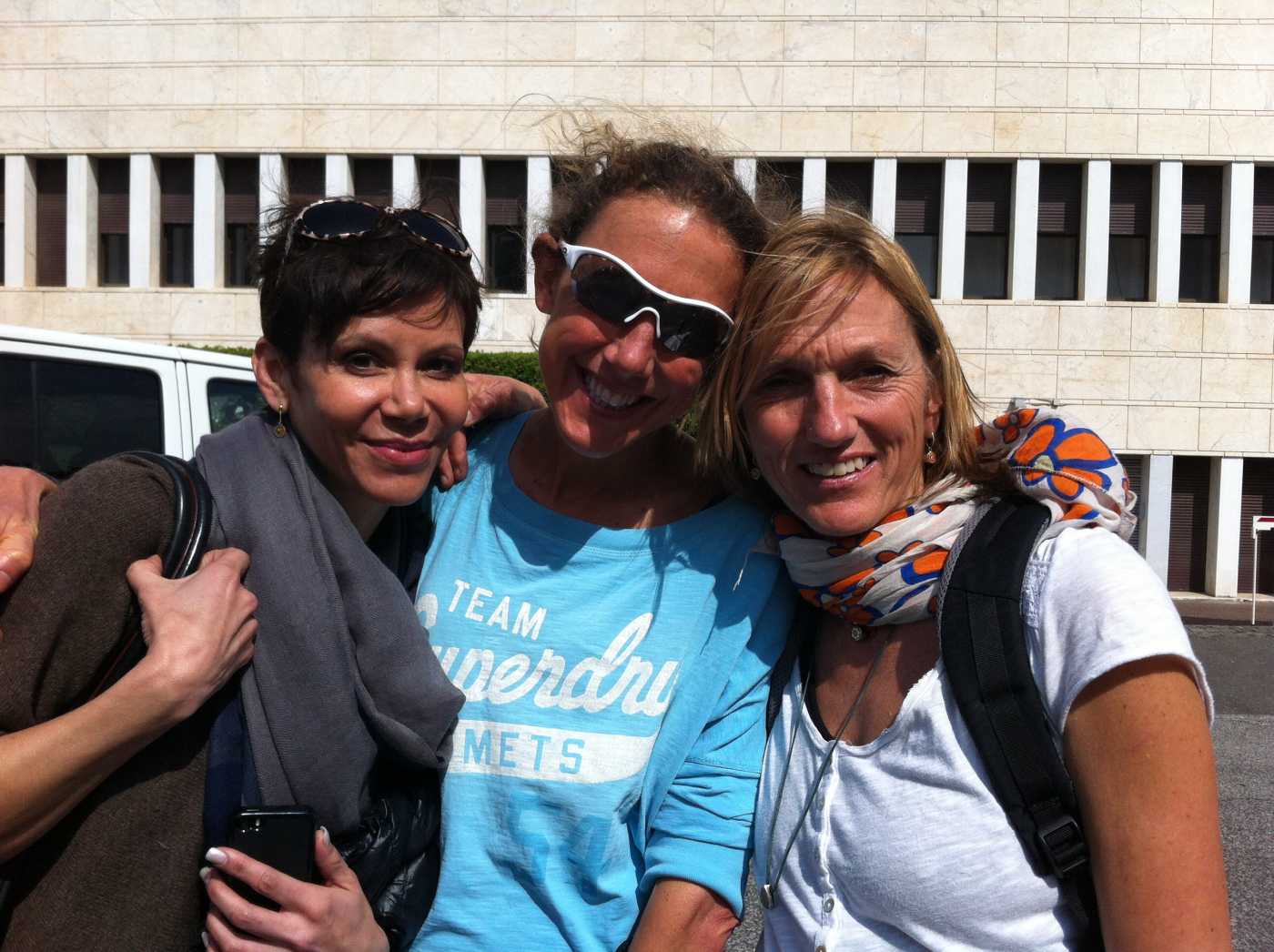 Ale, Chrissie and I in the queue to collect our bibs

I made it. And I made it in good time, or at least in a time that I was pleased with ( everything in life is relative)! I finished in 04.05.03 and even though I didn’t manage to stay below the 4-hour-mark I am happy. In fact I came 6,929th, which puts me in the first half of the 14,608 finishers. So how could I possibly not be thrilled!!! Ok, if we put my time into perspective and compare it to the winners it seems as if I had  been crawling the streets of Rome. Legese Shume Hailu from Ethiopia finished in 2:09:47 while his female compatriot, Geda Ayelu Lemma, only took 2:34:49 for the 42.195 kilometres. Congratulations to the winners on these extraordinary times!

Running a marathon is never easy and I am sure that half of my stamina and willpower to make it to all the way to the finishing line came from all of you and the positive energy you were sending me while I was slipping across the wet Roman cobblestones! A huge thank you once again – not only for the financial support you have given just-one.org but also for your psychological support. Knowing that I had to perform well for you and the street kids in my chosen second home, Kathmandu, gave me a huge incentive to run and strength!

So, why does my headline say: “The weather gods must live in Rome”? Well, the ethereal atmosphere at the start of this race was pretty special. When the more than 19,000 runners were slowly walking towards the start line, the skies occasionally opened pelting us with some pretty heavy rain. It was quite interesting as being squashed by so many people was actually quite good on that occasion as everyone was radiating huge amounts of heat, which kept me warm despite being soaking wet.

However, when the race started at 8.50am, the rain stopped and the sun came out, which was beautiful especially with all the Italians and non-Italians cheering and shouting “Oh sole mio”.

And so I went on my little sight seeing tour through Rome – and it was high time to do so as I had never been to the Italian capital before, and I missed the chance to look at the historic buildings, which are so ubiquitous in this city, on Saturday as we had to queue up for about two hours to get our bibs. But my sister Christiane and my friend Evi, who came as my support crew all the way from Garmisch-Partenkirchen, paid due to all the sights on Friday and Saturday so I thought that I would get away with taking my eyes off the uneven road surface every once in a while and look at the historic buildings en route!

The start was quite interesting as we were stuck in “traffic” a few times but it didn’t take long and the crowd was flowing! Once I had spotted the pacer with the purple “4-hour” balloon, I immediately went for him as I wanted to make sure to run the marathon in 4, or under. However, as – at that time – his pace seemed a bit slow, I sprinted right past him trying to catch up with the orange 3.45 balloon….without success though and I actually never managed to get near him during the whole race, which was fine as I was feeling very smug being ahead of the 4-hour-guy!

On Saturday, my friend Chrissie gave gave me the smart advice to take an energy gel, which I had never used before, every 10k and it was great as it broke up the journey and almost felt like getting that meal on the airline – it always gives me something to do on these long flights :-). After I had downed my first gel at kilometre 10 and got hit by another brief downpour, I was already looking forward to my next energy boost at kilometre 20. And so I cruised along hoping that I would be able to keep that pace and stay ahead of the guy with the purple balloon.

I guess I had my first bout of faltige at about kilometre 28 when I started to feel my body. My legs were getting very heavy and I have to admit that the thought of having to run for another 14k was a bit painful.

At this stage, I was no longer cruising but plodding and I could feel the drop in speed, which was confirmed when the 4-hour-guy with his purple balloon overtook me at about kilometre 35. “Bummer”, I thought! I tried to keep up with him but my legs just wouldn’t let me , which turned my desire to finish in under four hours into the desire to just being able to keep on running and finish!

Starting to feel the pain, I all of a sudden heard a familiar voice cheering “Billi Bierling” GOOOOO”! And there was my friend Tom, a professional ironman athlete from the UK, taking a pic of my hobbling and firing me on. It was amazing how much of a boost his presence gave me. Thanks Tom, for injecting a bit if life into my tired legs as I am sure that this cheer made the following three kilometres a lot easier.

But despite Tom’s boost, I still didn’t feel like having regained my cruising speed though- the purple guy was long gone and I felt as I were limping rather than running.

Kilometre 40 led through a tunnel and when I came out on the other side (at this point it was chucking it down with rain again), I suddenly heard someone call “Baerbl-Billi” but when I  turned around I could not see anyone familiar. I later found out that it was actually my sister and Evi, and I was very touched that they went through the trouble of tracking me down at the finishing line rather than going to the Vatican to see the Pope. “You looked great and it seemed as if you were not exhausted at all,” said my sister Christiane afterwards. Well, I am not sure whether she just tried to flatter me but it was a huge boost of confidence!

Even though still hard, the last 1.5 kilometres were a relief as it was slightly downhill, went past some beautiful old and historic buildings, and the thought of having almost done it, made the whole exercise a lot easier!

…. and then came the anti climax! When I had entered my last kilometre, I was expecting loud music, big signs counting down the final metres and some enthusiastic cheering from the crowd…..but none of it happened. I was actually briefly confused whether I had forgotten the distance of a marathon and that it was going on for another couple of kilometres. But no – it was still at 42.195km and I guess I had been spoilt from Berlin, where the whole city was partying along the route reaching its absolute climax at the finishing line.

And so I ran through the gate marking the end, still unsure whether I had to carry on or not, but when a pretty Italian lady put a finisher medal around my neck, I knew that it was time to stop – and it felt great! I quickly stretched my legs, wrapped myself in one of these aluminium insulating blankets and made my way back to the hotel, where I got ready to fly back to Switzerland.

Despite the rather quiet finish, I would like to thank the city of Rome for making it possible to have this event. And I would like to thank you again for supporting my run and helping Declan with his great work in Nepal. I would also like to thank my friends and family for bearing with me and accepting all my crazy ideas as my next adventure is already beckoning.

I will depart to Nepal on Friday, 28 March, to do interviews for Miss Hawley and the Himalayan Database and then set off to attempt the 5th highest mountain in the world on 12 April. I will be going with Himex (Russell Brice) again and I will try and keep you posted as often as I can.

In the meantime, I will rest my tired legs and hope that – conditions-permitting – I will be strong enough to get to the summit of Makalu this time around.

A ‘short’ coffee outing in Pheriche