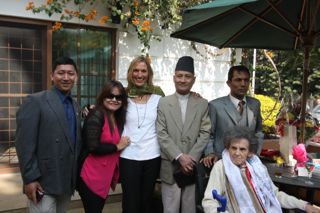 Bhawan, Namita, I, Jeevan and Suban with Miss Hawley at her birthday

Apologies for the late last post about Ama Dablam but as you can imagine, life in Kathmandu has been rather hectic with Miss Hawley’s 90th birthday on 9th November and all the (unsuccessful) teams coming back from the normal route of ‘The Mother of the Jewels’ – the translated name of Ama Dablam.

It has been a fantastic trip even though we did not reach the summit. Russell would probably say: “In the old days, we often did not get to the top…” – and I guess he is right. In modern mountaineering with all the Sherpas and good infrastructure, a lot of clients think they buy the summit when they sign up for a commercial expedition. Our case was a bit different though as the north ridge is not often climbed and I guess that it has only been attempted ten times or so since Russell and his team reached the to of Ama Dablam via this route in 1980.

I am certainly not the only one who enjoyed the climb and even though we only climbed up for one day and spent half a day abseiling 65 pitches in a three-week-trip, it was very rewarding. “I had some of the best climbing in my life,” said Greg when he did his little speech (on the Himex site) on our last evening at base camp. And Greg must know what he is talking about – he owns a few climbing gyms in the US.

Despite not having been successful on her first Himalayan trip, Katharina was pleased that she had opted for this Ama Dablam trip. “I could have signed up to a bog-standard expedition and maybe I would have reached the summit, but I am sure it would not have been so entertaining and educational,” she said. “I saw everything – from the man with the sewing machine on the way to Gorak Shep to the most expensive sanitary towels in the world!”

Room with a view

When we reached Camp 1 on 5th November at around 3.30 after about six hours of climbing, I was stunned how the Sherpas managed to squeeze two tents onto this little platform. “I had forgotten that it was so small,” said Russell proudly explaining that back then they had called it “Russ’ Roost”. It was one of the most beautiful spots I had ever slept in. The views of Everest, Lhotse and Nuptse to one side, and Makalu on the other side was breathtaking. However, there was not a lot of time (and space) to hang around in the front yard of our tents and so we disappeared quickly into our sleeping bags.

Katharina and I tried to get some soup down, which is not easy up there and despite having been utterly dehydrated, I did not manage to get one single sip of water down. It is amazing how much we lie around on these expeditions (and how little we climb) but it is the nature of the weather and the cold. Trying to find a comfortable position in the drooping tent, Katharina, Shinji, Greg and I fell into a semi-deep sleep.

Even though I was keen to get down (I kept on thinking about the 65 abseils), Katharina and Greg were very eager  to carry on a little bit further up and have a look ‘around the corner’, which we did and I have to say, it was well worth it. We reached a little plateau at about 6,150m which we made our summit. Greg tried to follow the footsteps of Shinji, who went on a bit further, however, very quickly he felt too scared to carry on. “This is awful,” he said digging around in the sugar snow, which was also to be found further up.

I guess all in all we were actually quite happy to go back down as the conditions higher up on the mountain just did not allow for safe climbing – especially for our Sherpas, who were leading the climb and fixed the rope. “I liked the climbing but I was also very scared. Hopefully next year, it will be in better conditions,” said Phurba Tashi, our Sirdar.

The rest of the expedition was over pretty quickly. The day after we got back to base camp, we packed our bags, waited for Nawang and the 42 yaks and embarked on our downward journey to Dingboche, where a lot of beer and Chang (Nepali rice beer were waiting for us).

The following day, we walked down to Khumjung from where we took a helicopter back to Kathmandu – and I was more than happy to do so as it brought me back to the madness of the Nepalese capital exactly one day before Miss Hawley’s 90th birthday, which I noticed during the trip was pretty important to me. I was very keen to get there in time for the celebrations, which took place at the residence of the American ambassador to Nepal.

Given Miss Hawley’s age, it was a lunchtime event and it was nice to see you so many people show up and care for this lady, who has contributed a lot to Nepal, no matter whether it is in relation to mountaineering, diplomatic relations or journalism. “She introduced Nepal to the world,” said Kunda Dixit, editor of Nepal’s weekly newspaper ‘The Nepali Times’.

I was also happy to present Miss Hawley with the audio birthday messages I had collected from mountaineers, diplomats, friends and family from all over the world and it was lovely to see her look obviously surprised when she heard the voices of Reinhold Messner, Junko Tabei, Kurt Diemberger, Chris Bonington, Lydia Bradey and Peter Habeler… just to name a few. “How did you get HER???” she looked at me completely startled when the voice of the first woman who reached the top of Mount Everest, Junko Tabei, filled the room.

It was truly lovely to see Miss Hawley being so touched by the presents, speeches and compliments she received on her ninth decade and which she definitely deserved.

As far as my winter movements are concerned, I will be in Turkey this weekend for the annual 15km-run in Istanbul – an event my friend Ale and I have been taking part in for the past three years. Afterwards I will fly to Germany before I continue to Bern in Switzerland where I will, once again, work for the Swiss Humanitarian Aid. Among other things, I will be responsible for some of the media work related to Syria, which should be rather interesting and very different from the mountaineering world I live in here.

In the meantime, I hope you will all have a beautiful winter (or summer for those ‘Down Under’) and lots of snow, which will make for good ski touring!

A ‘short’ coffee outing in Pheriche

A huge ‘Thank You’ from Just-One