There is no expedition without water

Life is full of surprises and so is an expedition to a relatively new route with a base camp that hadn’t been used for a long time. On Wednesday evening, just as we were packing our things to go to base camp the following day, Russell got a radio call from Phurba Tashi telling him that the lake seemed to have dried up or they could not find it because of the snow. 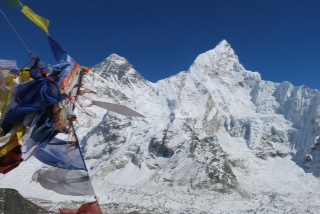 The horseshoe seen from Kala Pattar

But there is always a solution to a problem and in order to find it, Russell decided to hike to base camp on Thursday to come up with a new water plan. “Nawang said that there is water below our current base camp, so we might have to shift the whole camp, which could be a lot of work – but let’s see,” said Russell. As the rest of us did not want to sit idle while our team was working hard, we decided to go to Gorak Shep – a trek that most people take two days for. So, instead of going to Ama Dablam base camp, Shinji, Greg, Katharina and I embarked on a hike up the valley while Russell, Lacchu, Loppsang and Hiro went to Ama Dablam base camp.

Kazu, who is filming Naoki’s adventure for Japanese television, stayed two nights in Dingboche from where he did some amazing nighttime shots. “I put my camera outside the lodge and let it take one picture every two seconds,” he explained. As the battery only lasted for three hours, Kazu had to interrupt his sleep three times that night to replace the battery. When he showed as the photo sequence, we were all very impressed as you can see the stars move across the sky. “This short 30 second footage is very labour-consuming as I used 1,000 pictures for it.” Once Naoki will join us at base camp, Kazu will concentrate on filming his climb, which will be shown as part of an adventure series as a 90-minute film.

Those, who walked to Gorak Shep, set off at 6.30am in beautiful sunshine, but cold temperatures. After about 3 1/2 hours we reached Gorak Shep, which was still covered in snow and looked more like a skiing resort. “I have never seen so much snow in this village,” said Shinji, who has been there many times. After having had a drink and some food, Greg and I climbed up Kala Pattar, a nice view point at 5,500m just outside Gorak Shep while Shinji and Katharina went back down to Pheriche. “Billi, you kill me,” said Katharina when she left Gorak Shep. “I don’t know how you do it, given that you do it on a piece of toast and a chapati.”

Well, I would not have carried on to Kala Pattar but Greg, who is attempting to climb Mount Everest next year, was keen to get a good glimpse of the top of the world. I have to confess that looking across into the horseshoe consisting of Everest, Lhotse and Nuptse and knowing that I have climbed all three of them (or at least one of the many summits on Nuptse, which may not have been the highest one) filled me a little bit with pride – but of course not without thinking about the Sherpas, without who I would not have managed to achieve this feat.

As we were pressed for time and on a mission, Greg and I only stayed for about five minutes on top of Kala Pattar before we headed back down to Pheriche again. Still feeling good, I ran most of the way back to Pheriche and I managed to arrive before darkness.

Fortunately, Russell’s mission to find a water supply was successful, even though getting it to base camp will not be easy. “Phurba Tashi and I decided not to move the camp but to get the water from the glacial lake below.” As the approach route to the lake is quite tricky and involves technical climbing, it will be impossible for a kitchen boy. For this reason, we have to employ two more climbing Sherpas, who will be solely responsible for getting water to base camp. “The water transporting Sherpas will have to arm-wrap down to the glacier on a fixed rope and climb back up again, each carrying about 20 litres of water,” Russell explained.

As we will use about 400 litres of water per day, these two climbing Sherpas will certainly not be bored. Being aware of the fact that water will be a rare commodity at base camp, we all used our rest day to wash and do our laundry in order to avoid wasting too much water further up the hill. As far as the route is concerned, the Sherpas have started fixing the rope, but the rock slabs on the bottom of the route above the Col are proving to be difficult because of the new snow. “I think it will be easier further up as there will be more ice than rock,” Russell remembers from his 1980 expedition.

Looking at the beautiful north ridge is still very daunting, however, I will see how it all pans out when we get to base camp and then further up the mountain in the next few days. Depending on the internet connection up there, I will update this site as often as I can but you can always check out the Himalayan Experience website at www.himalayanexperience.com.

Thanks for reading and hopefully enjoying my website – it means a lot to me.

Leave a Reply to Judy