After a few days of heavy rain, the festival of Dashain and another amazing speed record that was set by the Swiss climber Ueli Steck, it is now time for me to head off to the mountains again. Kathmandu has been incredibly quiet over the past four days as the Nepalis have been celebrating the festival of Dashain, which is the longest and most auspicious festival throughout Nepal. However, I felt really sorry for all the Nepali families, who have been gearing up for their celebrations for the past months, when the tail-end of the Indian cyclone hit Nepal and brought a lot of snow and rain to the Himalayan country. On the first few days though, it was still sunny, which was great for the kids as they could happily play on the huge bamboo swings that people have built all over the country. 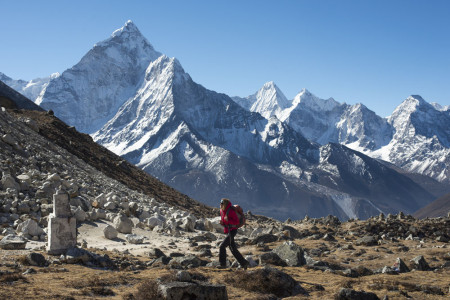 While the Nepali people were celebrating Dashain, Ueli Steck has once again accomplished something incredible. On 9th October, he became the first person to solo the 2.5km-long south face of Annapurna 1 – an achievement that has already been hailed as one of the greatest feats in modern Himalaya history. I was lucky enough to catch up with him over a beer in the Yak & Yeti hotel and I am always amazed, how well he looks after such a strenuous expedition. He looked as if he had just come back from a beach holiday and not from a high Himalayan peak. And on top of all his amazing accomplishments, he is such a nice guy. You would have thought that his fame and strength and achievements have gone to his head, but this is absolutely not the case with Ueli. He is down-to-earth, modest and, as he said himself ‘he still boils with water’ (a German expression meaning that he is not different from anybody else). If you are interested in what he had to say, you can read the interview I did for swissinfo.ch here.

As far as the rambling of this headline is concerned, I will be off rambling tomorrow, 17th October, and I am very excited about it. Even though I seem to know the Khumbu like the back of my hand I am really looking forward to going back there. And also happy to leave the dust and pollution of Kathmandu behind and breathe some fresh air.

Depending on Internet connection I will try and keep my blog updated but if this site does seems to be asleep, you can always check the Himalayan Experience website for news.

Thanks for all your interest and support – it means a lot to me!