Warning: Declaration of wp_bootstrap_navwalker::start_lvl(&$output, $depth) should be compatible with Walker_Nav_Menu::start_lvl(&$output, $depth = 0, $args = NULL) in /home/customer/www/billibierling.com/public_html/wp-content/themes/billi-bootstrap/wp_bootstrap_navwalker.php on line 22
 Billi Bierling – Journalist and Climber | Thank you, Berlin!

Last weekend, I had the pleasure to take part in the 40th edition of the Berlin Marathon, which was an amazing event. The Germans certainly know how to party and first of all I would like to thank the people of Berlin for their enthusiasm and participation in this monster race. According to the organisers, several world records were broken, one of which was Wilson Kipsang’s sensational time of 2.03.23. In an interview, the Kenyan runner said that even though he was extremely pleased with the race, he was striving to run even faster. How fast, however, he could not say. “I cannot set a limit as this is a process, which is directly liked to my training. It will be difficult to run under 2.03, however, I don’t think it’s impossible,” he said. Florence Kiplagat, who is also from Kenya, won the women’s race for the second time, this year in 2.21.13. “I want to win the Berlin marathon three times,” she said in an interview. “The course is perfect but it was a little bit too windy and I had some problem with blisters,” she said. “I want to do better next time!”

As for myself, I am not quite sure how one can possibly run the 42.195km in less than 4 hours – the time I had aimed to finish in, but did not quite manage to achieve it. However, it was my first marathon and I was not really running for time, but for pleasure. The great thing about such a race is the fact that it takes you to interesting places and in my case, it took me back to Berlin after so many years. And it took me back to my dad’s best friend Achim, who he used to run the Berlin marathons with. It was a real privilege to stay with ‘Onkel Achim’, as I can’t stop calling him, and listen to all his interesting stories about Berlin’s history and his marathon time with my dad. “When we ran our first marathon in Nuremberg, I was a few minutes faster but waited for your dad to run with him to the finishing line,” he said. I later found out that my dad was not so magnanimous and never waited for Onkel Achim in the following races, which he finished a tad bit quicker. 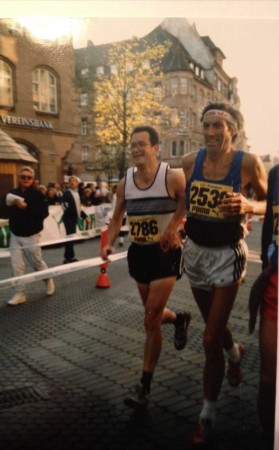 Onkel Achim and my dad finishing hand in hand in Nuremberg

“Billi, it’s only three more days to go and I am so excited,” Onkel Achim rang me a few days before I left for Berlin, and once I got there I could totally understand his excitement. The whole city seemed to be buzzing and you could already sense the great atmosphere. According to the organisers, 40,000 people participated in the event, which we definitely felt when we went to pick up my bib on Saturday afternoon. The pick-up area was at the Tempelhof airport, which used to be considered one of the world’s oldest operating airports, but closed down for operation in October 2008.

Onkel Achim, his wife Irene and I thought that we would quickly pop in and get all my running gear, but little did we know. I did not believe my eyes when I saw the long queue at the counters and I was surprised that the Germans did not come up with a better queuing system. But then again, it’s really the British, who are world-class at queuing, and not the Germans – and Onkel Achim certainly proved that. While Irene and I went to the back of the queue, Onkel Achim ran off, brolly in hand, saying that he would have a look at what was happening further down the line. It did not take long and I had him on the phone telling me that he was right at the front of the queue and that I should come. He waved with his brolly, which I could just make out as it was so far away, however, I did not have the guts to jump the queue, so I stayed and followed the line the British way.

After about one-and-a-half hours, I was the proud owner of a bib, a bag full of goodies and a timing chip and so we went off to get some pasta and then go home to have an early night – not without a few glasses of red wine though and a ‘tranquillising tea’, which according to Onkel Achim, would help me sleep  (I still think he probably needed it more than I did).

The proud owner of a bib!

Marathon day was beautiful. We took the underground train to the start at the Brandenburg Gate in brilliant sunshine and even though the morning was pretty chilly, at 15C it turned out to be the perfect running temperature. When we got there, Onkel Achim told me what it was like to run through the Brandenburg Gate for the first time in 1990, one year after the wall had come down. “Your dad and I always dreamt about running through East Berlin and our dream came true at the last marathon we ran together,” he said with watery eyes.

Being there was also very emotional for me. I felt like a needle in a haystack among the tens of thousands of participants, but even though I was running without a mate this year (I usually do these races with my friend Ale), I felt that my dad was with me enjoying the thumping atmosphere. At the start, crowds were already singing and dancing, and when everyone started clapping to the tunes of the Greek ‘Sirtaki‘, my eyes filled with tears, which I guess were not only sad tears for my dad, but also happy tears for being allowed to take part in this overwhelming event.

Onkel Achim and I in front of the Brandenburg Gate

It took about 30 minutes for me to get from my block ‘H’ to the start line, where everyone wanted to break out into run, however, dashing off to quickly was actually impossible as there were too many people trying to do the same thing. What always amazes me in these races is watching the different running styles. It has happened to me several times that I thought the person in front of me was rather slow and maybe even a bit ‘unsporty’, only to find out that it was impossible for me to overtake as they were a lot faster than me.

And I kept on telling myself that I did not do the marathon for speed. “Just enjoy every metre,” Onkel Achim told me and I was certainly trying to do that. I kept on looking around in order not to miss any historic buildings, and I utterly enjoyed the crowds lining the streets of Berlin cheering and clapping and giving the participants enough energy to finish this long, but very flat course.

What made me laugh were the ‘Power Bar‘ stations as you would have thought that after downing an energy gel everyone would just speed off into the sunset. Well, not when you give 40,000 people one of these sugary gels at the same spot. Once we hit the ‘Power Bar’ station, the road was extremely sticky due to the tons of sugar that ended up on the tarmac leaking out of the half-finished discarded gel wrappers. So rather than being quicker, the runners seemed to get stuck to the asphalt making a real racket with their running shoes.

Before the race with a beautiful Brandenburg Gate

Maybe I should have had one of these gels as at kilometre 35 exactly, I hit that wall everyone had been telling me about. It was very interesting to see that up until then I felt like running a gazelle (I am sure I did not look like one) but once I got to that point, my legs stiffened and I felt as if I had  lead in my feet. And what was utter enjoyment only a few seconds ago, became a real drag. But I carried on and did not let the lead stop me running, however, I did let it slow me down. For the first 35km I ran at an average pace of about 05.30 per kilometre, but once I had hit the wall my legs slowed me down by a whole minute. Well, I quickly reminded myself that I was not running for time but pleasure, even though remembering that was also quite difficult given the sudden pain that went through my whole body.

What I did remember though were my dad’s ‘running words’: “Immer locker!”, which means something along the lines of “Loosen up!” So, I tried hard to loosen up and actually seemed to manage to at kilometre 42, when I obviously had a second wind, and with Onkel Achim’s examining eyes on me, I felt like galloping through the finishing line like a gazelle finishing at 4.11.53.

As security was quite tight following the attack at the Boston marathon earlier this year, nobody other than the runners were allowed in the finishing area, which meant that Onkel Achim and Irene could not be there to welcome me with a hug. And so I simply walked on, grabbed one of these huge yellow plastic sheets as it had got quite chilly, snatched an alcohol-free beer and a banana, threw my chip into one of the big buckets and was looking for the exit wondering how I could possibly find my friends among all these people – and for a minute I felt a bit lonely and lost. Was this an anticlimax? However, I was saved within seconds as all of a sudden I felt a very warm hug from Irene, who saw me come out of the little gate where they happened to wait for me.

All in all, it was one of my most wonderful weekends as it was packed with action, emotions, fun, good food and the realisation that even though the Germans get a lot of bad press and are often accused of not having a sense of humour, they certainly know how to party and motivate people. And some of them even enable others to enter the Berlin marathon, like Markus Appel, who managed to get me a space when I decided to run the marathon on the spur of the moment. So, thanks again Markus – and it was great to finally meet you!

After a quick bite to eat and a shower, I packed my bags and got into a taxi that took me to the airport, where I boarded a plane to Kathmandu. I was lucky as for some bizarre reason my body was no longer aching and I am actually still waiting for my muscles to get sore, which has not happened yet. Wow – the last week of September 2013 certainly felt like living life in the fast lane – even though I was not really in the fast lane in the marathon.

Thanks again Berlin for this great event!