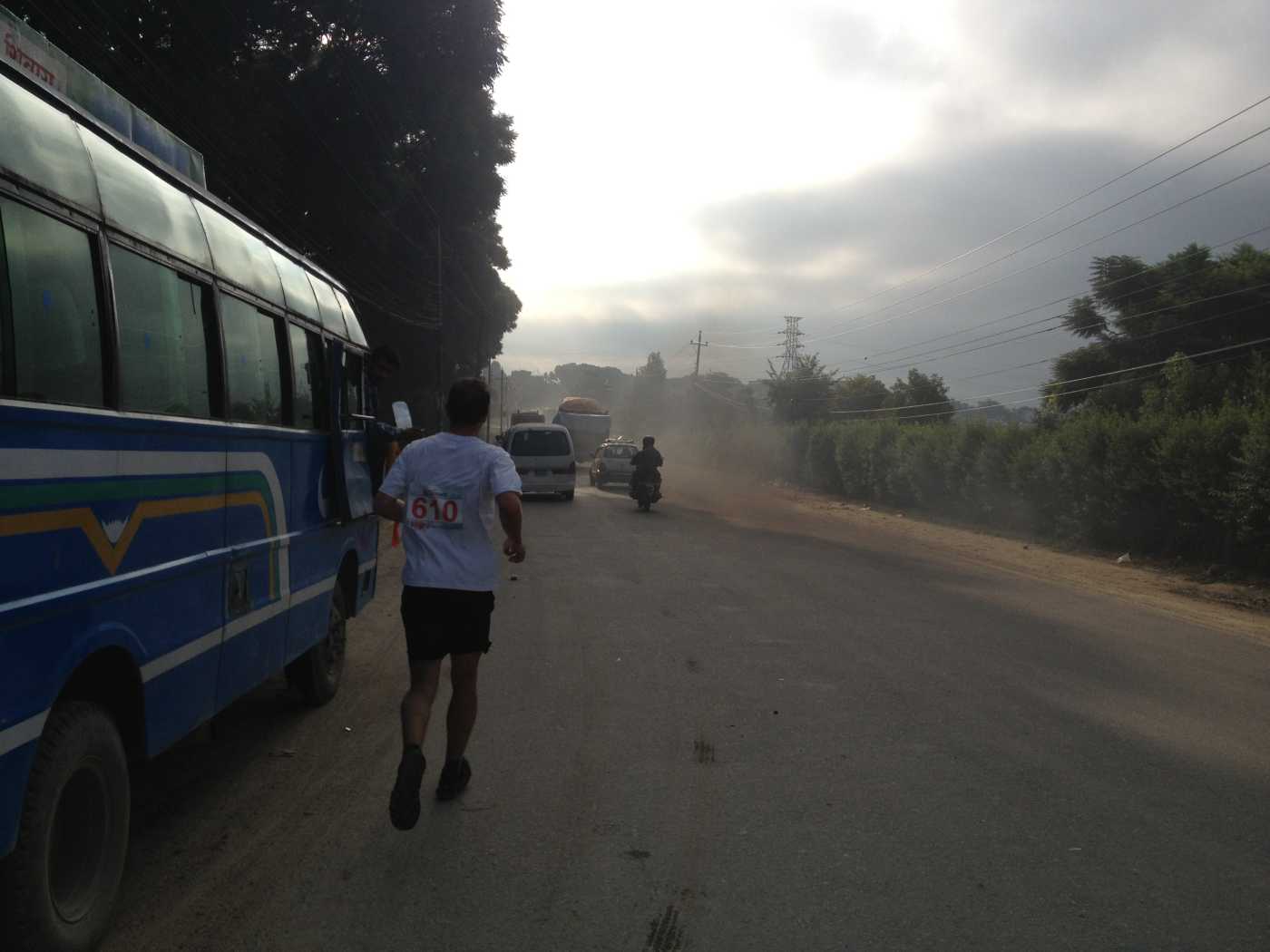 Running in the dust

Last Saturday, my friend Richard and I were brave enough to enter the Kathmandu marathon, or rather the half marathon as doing the full distance in this mad traffic would have been suicidal. After the race, I wrote a story for the Guardian’s Running Blog, which you can find below. I am currently in Germany and after having celebrated my mum’s 80th birthday I am now getting ready to go to Berlin to run the marathon there.

I am very excited about it for two reasons: The last time I was in Berlin was in 2002 when I was supposed to run the marathon, however, instead of jogging through the German capital, I was lying on my friend Jan’s sofa with a broken neck of my femur watching this amazing event on television. It was my own fault that I ended up like this as I had been overtraining and had not followed a proper diet to give my body enough strength to cope with all the exercise. A couple of weeks before the race, I started having a pain in my groin, which was already the beginning of a stress fracture in the neck of my femur. However, as it was not diagnosed properly, it got worse, developed into a crack in my bone and finally into a full-blown fracture. I will spare you the details, but I certainly have unfinished business with the Berlin marathon and I am very excited to feel fit and ‘unbroken’ this time around.

The second reason for my excitement is the fact that the Berlin Marathon was the favourite race of my dad, who passed away seven years ago. He did it three times and once he ran more than 30k of it barefoot – I guess, he was already a trendsetter  a long time before Christopher McDougall published his bestseller ‘Born to Run‘ telling us that we don’t actually need all the cushioning our running shoes are equipped with. The reason for my dad’s trendsetting actions was very simple though. A few weeks before the race, he had the ingenious idea to buy his running shoes one size too small as he thought it would be easier to run as they would be lighter. Great idea! Well, that’s exactly what he found out and after about 10km his feet were so sore that he threw away his brandnew but useless running shoes and continued the race barefoot, finishing in his best time of 03.40!

I don’t think I will match his time, which is fine as I am just very excited to take part in the event. I actually just want to finish the race, which will be my first marathon ever. I will fly back to Kathmandu the same evening as I need to be back to interview the teams coming back from the big mountains, such as Cho Oyu and Manaslu before I head off to Ama Dablam on 17 October.

In the meantime, I hope you will enjoy my little Kathmandu marathon piece:

‘It’s like running with a cigarette in your mouth’

It was definitely done in the finest Kathmandu style! When I arrived at the marathon registration desk at 5.30am last Saturday – I was already half an hour late – the person who was supposed to take my details was nowhere to be found. “She will be here in a minute,” said race director, Nilendra Shrestha, who had taken on the brave task of organising the marathon in the Nepalese capital for the seventh time in a row.

More than 6,000 runners were expected to participate in the event, which featured a full marathon, a half-marathon and a 5km-fun-run, however, a lot of the aspirants must have overslept, as the stadium – the start of the race – did not seem very busy that morning*. Nevertheless, it was great to see young and old, Nepalis and foreigners and even a bunch of wheelchair athletes gather at the crack of dawn to run together through the smog and dust of Kathmandu.

“Every year we want to block the roads, but it’s just not possible here. We don’t have alternative roads and for our citizens and drivers using the roads, this is still something they are not used to,” explained Shrestha, who once lived in Germany and ran across what used to be West Germany in the 1980ies. “Well, it’s certainly a lot easier to do something like this in Europe.”

I must say, I do take my hat off to the organisers; putting together an event like this in Nepal must be somewhat of a nightmare. Kick-off was supposed to be at 6am, which seems very early in European marathon terms, but here in Kathmandu it means you might actually have a chance to beat the traffic. Well, that’s what I thought. Being a good and punctual German, I walked towards the start at about 5.58am, however, there was nobody to be seen. Not one single person was ready to start at 6am. ‘Oh well’, I thought and ambled back into the stadium, where people were still chatting, registering, stretching or just hanging about.

I ended up talking to a German tourist, who, on the spur of the moment, had decided to do the full marathon distance of 42.195km, which he thought could be the icing on the cake of his four-week-long trip to Asia. Little did he know, what he was letting himself in for! “Due to construction works that have been going on for 18 months and have made normal life pretty difficult in Kathmandu, the race could no longer follow the route from the previous years. Instead of going through the scenic and culturally interesting main squares of the three former Royal Cities, namely Kathmandu, Patan and Bhaktapur, the 210 runners for the half and full marathons had to pound along the Ring Road, which can probably be compared with the M25 around London – just smaller and more polluted. For the full marathoners, it meant they had to run this loop twice!

While my friend Richard and I were scuttling along the busy road, I tried to imagine what it would be like having to do run this route again, and quickly came to the conclusion that neither my lungs nor my brain manage to do so. Lost in this thought, I overtook a Brit, who was holding a handkerchief close to his mouth. “Fun, isn’t it,” I said while a truck blasted past, leaving us engulfed in a thick cloud of black smoke. “It’s like running with a fag in your mouth,” the half marathon runner responded, and I guess that was exactly what it felt like.

And so we carried on, dodging busses, trucks, cows, bicycles, motorbikes, rubbish vans, chicken vendors, tuck tucks and the like, but we also passed some enthusiastic Kathmandu dwellers cheering us on and congratulating us on our willpower to run through this mad traffic.

After about two hours, we entered the stadium, where we did our final 400-metre-loop, desperately craving a drink. “Good job this race is sponsored by REAL juice,” I thought to myself, expecting a lovely smiling young lady presenting me with a refreshing glass of juice upon my arrival at the finishing line. But I obviously expected too much: there was no juice or water at the finish. “A few years ago, we handed out juice, but it was absolute mayhem and I was worried that people would kill each other over the free juice, so I decided not to do this anymore,” said Shrestha.

Despite the lack of juice, clean air or great organisational skills, I still think it’s wonderful that the Kathmandu marathon is in its seventh year, and Shrestha has not yet given up organising this event. “I usually make a loss, but it’s very rewarding to see that the number of Nepali runners is increasing every year,” he said emphasising that the fee for Nepali runners was a mere 500 rupees (3 GBP). It certainly gets them out running and might even create a new trend in the Himalayan country. So, Kathmandu marathon – carry on running!

Getting ready for the mountains