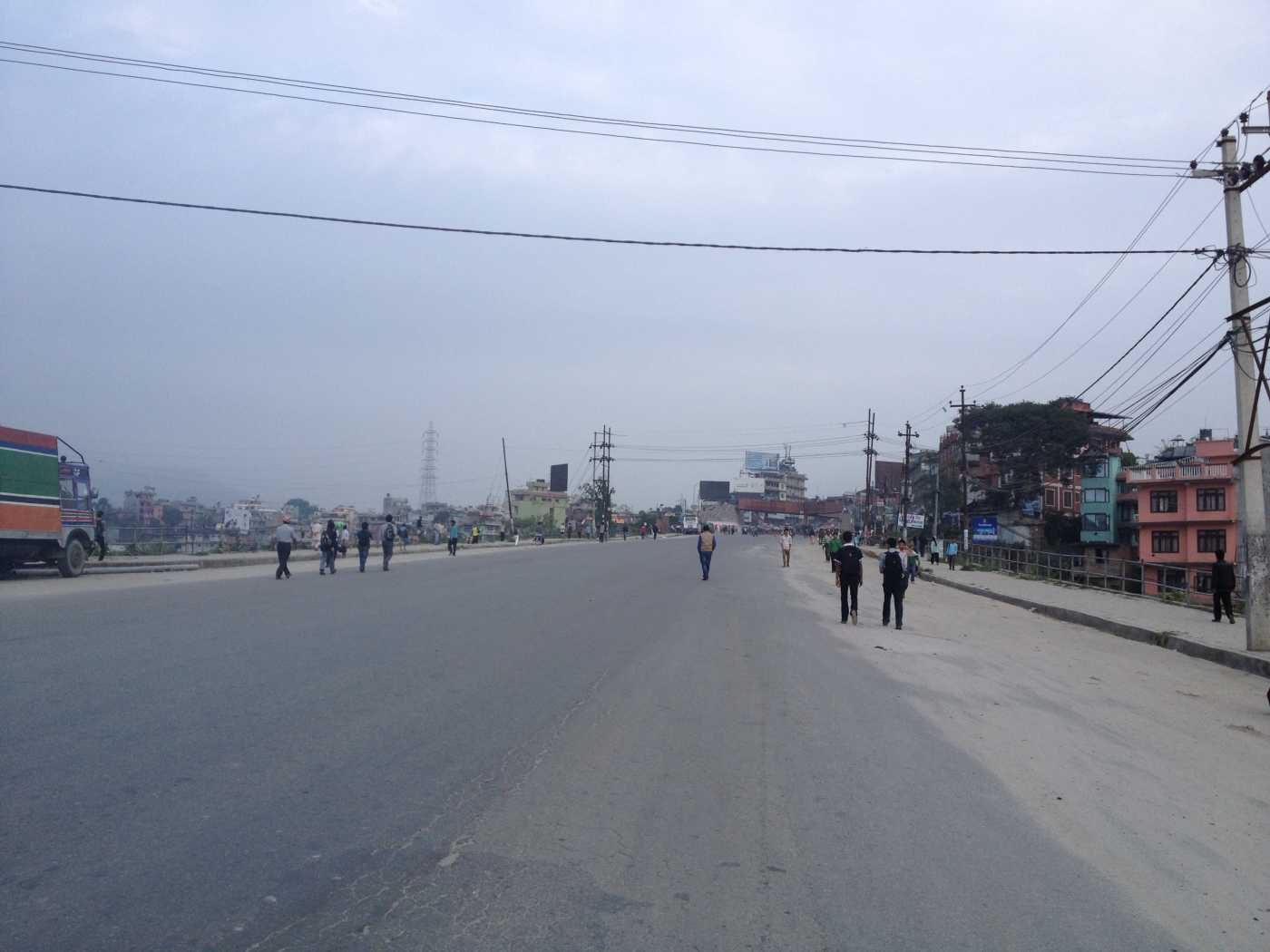 Not a car in sight on the otherwise extremely busy road

It’s all a matter of timing; if you get it right, you can actually enjoy a jog on the Ring Road. When I woke up at 5 o’clock this morning, I noticed that something was different. It was quiet. You would have thought that this was quite normal at this time of day, however, not in Kathmandu.

The ‘Kathmanduvians’ usually get up very early to either work out, take their offerings to the temple or drive around the capital honking their horns. But this morning, there wasn’t a sound to be heard; I could not even hear the incessant barking of the dogs.

Suddenly, I remembered that the Maoist party had announced a ‘Bandh’ for Thursday, 12th September. It’s usually a certain political party, who calls for these general strikes, which don’t allow businesses to open and ban all traffic – sometimes even bicycles – for a whole day. These ‘Bandhs’ are usually a tool for a political party to protest against the government turning a deaf ear to their demands.

During the civil war in the period from 1996 to 2006, the year the King of Nepal was toppled, the then Kingdom saw many of these Bandhs, however, in recent years they have waned a bit. In view of the general elections on 19th November this year, we will probably see more of these strikes again, which is due to seemingly unsolvable disagreements between most political parties.

Even though Thursday’s strike is a nuisance for a lot of people, it is great if you are a runner training for a marathon. So, after I’d noticed that the world out there was quiet and peaceful, I leaped out of bed, put my runners on and headed for the Ring Road at about 5.30am. With the ongoing road works it was still dusty, but the air felt so much better.

There was not a car to be seen on the wide road, but it was certainly packed with people walking, biking and even running. My training programme (yes I am still following the book!) for today was to run three sets of 4,000m in 22.30 minutes each, with a nine-minute slow run in between. It was actually perfect for me that the CPN-Maoists decided to call a strike exactly today, as speed training is so much better on the road than on uneven trails.

And so I tried to push my body to achieve the given time for my first 4,000m when all of a sudden a young Nepali runner with an impressive stride overtook me. Of course, I didn’t like it (I was actually feeling quite fast) and pushed myself a bit more to catch up with him; and so it happened that we ran next to each other for a while.

“Are you doing the Kathmandu Marathon next week?” I asked him. “No ma’am, I’m just a policeman doing my daily training,” he replied. We then quickly introduced each other by name, and that was it. We ran side by side in silence until he suddenly veered off to the right, probably heading for his house. Before he departed, he asked me whether I would like to have a cup of tea in his home, but as I still had another two sets of 4,000m to do, I kindly declined. Maybe next time!

When I looked at my speedometre after he’d left, I was surprised to see that I was actually running my kilometers in 4.55 minutes, which is quite quick for me considering I am quite a slow runner – and it was partly going uphill. So thanks to my temporary running buddy Sunil, I was able to push myself a bit more.

I continued on the Ring Road for a while, however, I didn’t want to run the whole thing again (my 32k run is scheduled for Saturday), and so I headed towards the town centre. I was just speeding up for my third set of 4,000m when I unexpectedly hit Durbar Square and its surrounding markets. Well, this was the end of my speed run. I was amazed, however, to see how many people were already milling about at 6.30am on a ‘Bandh-Day’. At first, I felt a slight aggression rising up inside me, as – and how dare they – hundreds of people were all of a sudden in my way hampering my 4.50min/km. Anyway, it finally got the better of me and I stopped and absorbed the chilled atmosphere. It was actually quite beautiful without the sound of the cars, tuck tucks and trucks that normally seam the streets of Kathmandu.

Once I got through the crowds, of people I picked up speed again and enjoyed the big empty streets of the capital. There was lots of riot police around and it somehow reminded me of my time here in 2006, when there were daily curfews due to clashes between government forces and Maoist fighters. On my run, I was wondering whether much has changed in this country since then. We still have strikes; we still have power cuts up to 10 hours per day; we still have Maoists clashing with police; and we still don’t have a constitution, which was promised to the Nepali people to be finished by May 2009!

However, it also made me realise that even though it’s not always easy, Nepal is certainly an interesting country to live in – you never know what is going to happen or what new rules are being introduced next. However, I really hope for the people of Nepal that they will soon have an elected government that will get this country up to speed and give them a better prospect for their future!

In the meantime though, I shall enjoy these ‘Bandh Days’ for my road runs. My lungs certainly appreciate it! And even though Sunil will probably not be there to push me, I have decided that I will do the Kathmandu Half Marathon on Saturday 21st September, the day I will be flying to Germany. I guess it will be good training for the Berlin Marathon, which is exactly one week later – not only for the running but also for finding out what it is like to get on a plane straight afterwards!

Wherever you are running, I hope you are having as much fun as I do!

The easy way up