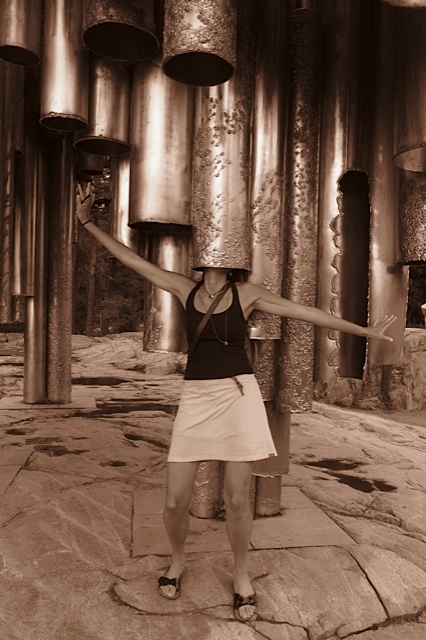 Sticking my head into the Sibelius monument in Helsinki.

I was just about to write that the monsoon in Kathmandu was on its final leg, when I noticed that my last entry was about the looming monsoon! Maybe I should just stop writing about the weather and find more interesting stories to tell.

A few days ago, I got back to Kathmandu after having spent a wonderful summer in Bavaria, where I certainly made the most of the good weather (here, we go again) to run, swim, climb and bike, and basically regaining my fitness after the tiring expedition to Nuptse in May this year.

Most of my time, I spent at my mother’s house in Garmisch-Partenkirchen, working on my translation of Gerlinde Kaltenbrunner’s book and doing some follow-up work for the Himalayan Database. In between, I nipped over to Switzerland, where I stayed with my friend Ale in Lausanne, learning French and teaching CORE classes, which I utterly enjoyed.

I also went on a short trip to Finland to see my friend Nonna and get to know the northern lifestyle a bit better, which I really liked. The weather up there was also gorgeous (oh no!) and I enjoyed swimming in the sea – something I had not done for many years.

And now, just in time for the arriving expeditions, I am back in Kathmandu to help Miss Elizabeth Hawley interview the teams, mainly going to Manaslu, Cho Oyu and less significant peaks, such as Himlung and Tukuche. However, Kathmandu is still quiet and most climbers will be arriving at the end of the month.

Miss Hawley, who turns 90 in November this year, is doing really well and diligently finding out about all the teams, she wants to meet this autumn. “It is a bit of a shame they are all going to Manaslu and Cho Oyu. I am getting a bit bored,” she said when I visited her to discuss our upcoming work.

The road works all over town are still ongoing and during a torrential downpour  (promise, last time) the streets of the Nepalese capital turn into rivers, and sometimes even sewages, making getting from A to B a rather interesting and muddy chore.

I will be in Nepal for four weeks, until I go back to Garmisch-Partenkirchen to vote in the general elections, celebrate my mum’s 80th birthday and run the Berlin Marathon on 29th September, which I was able to enter with the kind help of Markus Appel, who I have actually met through my website. Thanks Markus for getting me in at the last minute, which means a lot to me as there are two significant things about the Berlin Marathon:

Firstly, it was my father’s favourite marathon, which he once ran barefoot (he had bought runners that were too small thinking that they would be lighter in the race and ended up throwing them out after about 10 kilometres); and second, I still have unfinished business with the Berlin Marathon.

When I was training to run it in 2002, I managed to get a stress fracture in the neck of my femour, which then turned into a full-blown fracture by me ignoring the pain. I ended up having three operations, getting a huge metal plate into my hip and walking on crutches for about six months. “Berlin, I am coming and I am very excited about it.”

I will be back in Kathamndu at the end of September, when I will interview teams for another two weeks before I attempt to climb Ama Dablam, a beautiful mountain in the Everest region, which is often referred to as the ‘Matterhorn of Asia’. I have wanted to climb it for a long time and I am very excited that I am finally getting the chance to do so. As usual, I will go with Russell Brice and I guess I will send the odd newsletter about our small expedition, consisting of seven members and three guides.

However, in the meantime I hope that I will find something else to talk about other than the weather – so, watch the space!

The new season is starting