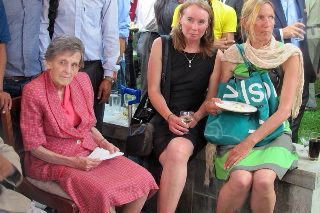 I have been back in Kathmandu for just over two weeks and life in the mountains seems far away. The change from tranquillity and clean air of the Everest region to the dust and hustle and bustle in the Nepali capital sometimes seems too quick – especially when you take a helicopter directly from base camp to Kathmandu, like most base camp dwellers do these days.

I have to admit that I also had such a quick trip, and when I reached my flat in the afternoon of 26th May, I hardly had time to wash off the dirt from the past six weeks as Miss Hawley was already expecting to see me there and then. “I am very glad you are back,” she said sounding rather relieved. I knew that it would not be easy to find all expeditions coming back from Everest and other peaks, and I was aware of the fact that I had already missed quite a few. With the option of flying back directly from base camp, some people don’t even spend one night in Kathmandu but go straight home to their families. “From Monday morning on the summit of Everest to Thursday afternoon in London,” an Everest summitteer wrote on his website. So, the speed with which people are now moving back and forth between the various base camps and Kathmandu has certainly made our job of meeting them personally more difficult.

Helicopter traffic at base camp has increased significantly since I first spent some time there in 2009. Pilots are no longer called for rescue flights only, and those who want a quick ride out of base camp simply call the heli companies on their mobile phones. Going down to lower elevations before the summit attempt has been done for years as the body and soul enjoys the thicker air and greenery before they are put to test on Everest. However, the trips down to Pheriche, Pangboche or Namche used to be done on foot and even though there are still teams walking down, the number of people hitching a ride has certainly increased.

Another interesting development regarding helicopter rides was Yuichiro Miura’s trip down from the mountain. On his descent, the 80-year-old Japanese, who became the oldest person to scale the 8,848m peak on 23rd May 2013, took a helicopter from Camp 2 [at 6,400m] at first to base camp and then straight to Kathmandu. “Should we consider this a full ascent?” Miss Hawley was wondering. “Well, he might get a note that he did not do the whole thing on his two feet.”  When I asked her what she thought of Mr Miura’s impressive achievement, her simple and short answer was: “So what!?”

However, better and quicker access to base camp is also a good thing as it has certainly sped up evacuations, saving lives as well as fingers and toes. And it gave me the chance to quickly be back in Kathmandu to take some of the workload off Miss Hawley and Jeevan, her other assistant. Nevertheless, the disadvantage of my quick return was that I did not have time to sit still for the coming ten days. Most expeditions were flogging into Kathmandu at the same time and the hotels in Thamel, the tourist district, were busy accommodating everyone and their blue barrels filling their hotel lobbies. “Billi Didi, you look stressed,” Anis, the lovely receptionist of the Hotel Thamel, observed. And Wally Berg, a friend and expedition leader from Canada, who I bumped into several times at the Yak & Yeti Hotel, told me: “Billi, how come you always look so fresh in the mountains and always so tired in Kathmandu?” Hmmm – not a compliment but of course something that made me think.

Toll on the body

Going on a high altitude expedition takes a huge toll on your body – something that can be easily ignored when diving straight back into busy life again. Most people take a few days of rest but due to my job with Miss Hawley, I have never been able get this breather after an expedition. When I come back from a trip, I usually get straight on my bike and scan the streets and hotels of Kathmandu for climbers – no matter whether they made it to the summit or not. I also find it very difficult not to run when I come back from an expedition. “Billi, you should not run. Your muscles need time to build up again,” said my friend Chrissie, who would probably do exactly the same. However, after such a long expedition I just need to find out how my running is going; and it is usually very slow and painful and it remains to be slow and painful for a few weeks. Lydia Bradey, who became the first woman to summit Mount Everest without supplementary oxygen in 1988, observed: “Billi, I think Miss Hawley would overtake you on her way to the paperclip shop,” referring to her special interest in the shapes and sizes of paperclips.

Despite the madness of the job and not being able to rest, I still enjoy my work for the Himalayan Database, but with an ever-increasing number of expeditions, locating and interviewing them has become almost impossible. I remember when I first started working for Miss Hawley I was devastated when I missed an expedition. This year, I just looked at my endlessly long list and thought: “Oops, another expedition that escaped my attention. Oh well, I can always send them an email.”

With the monsoon slowly moving in from India, expedition leaders, independent climbers, Sherpas and other punters have left Kathmandu and the capital is getting back to normal again – and with ‘normal’ I don’t mean quiet as this is certainly not the case. The streets are still filled with hooting cars, lost cows, barking dogs and cyclists balancing their huge loads over the many potholes and big humps on the roads.

Apart from the various events and records happening on Everest grabbing the media’s attention this year (click here for an article I wrote about it), special this year was the 60th anniversary of the first ascent by Tenzing Norgay and Ed Hillary on 29th May 1953. On the occasion, the new British ambassador to Nepal, Andrew Sparkes, held a reception at his residence in Kathmandu and it was great to see many Everest climbers, Sherpas and everyone else involved in an expedition turn up. Reinhold Messner was the guest of honour together with Miss Hawley, who put on her best frock and was certainly the most popular chick at the event. “Billi, can you ask Miss Hawley whether I can take a picture with her?” I was asked many times and it was great to see how the elderly lady, who turns 90 this year, loved to pose for photographs.

Now the spring 2013 season is over and I am using the quiet time to follow up on those expeditions I missed, meeting some of my Kathmandu friends and translating Gerlinde Kaltenbrunner’s book “Ganz bei mir’ into English, which should keep me busy for the next few months. I will take this work to Germany hoping that I will be able to enjoy a summer with less or no rain and more sunshine on my mother’s terrace in Garmisch-Partenkirchen. With the looming monsoon it is certainly the right time to leave Nepal and come back in autumn, when everything will be lush and green.

Thanks for following my website and have a lovely summer!