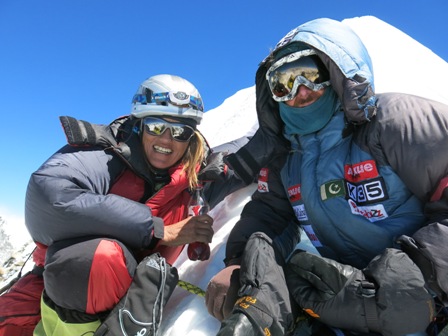 I am lying in my sleeping bag and my body is aching all over. I am tired. It has been four days since I came back to base camp from Nuptse. Other than being part of the famous horseshoe, which also consists of Lhotse and Everest in the Khumbu, Nuptse is not a particularly well-known mountain.

I had never imagined that I could ever get that high on this technical 7,864m peak, however, our Sherpas made it possible as Tashi, Rita Dorjee, Nigma and Phinjo had fixed 1,400m of rope all the way to the top the day before we started our summit attempt.

Our team consisting of Jing from China, Ellen from the States, Francois from France, the four Sherpas mentioned above and myself as well as Alex Txikon from Spain and Kenton Cool from the UK left our Camp 3, which is right across Camp 2 of Mount Everest, at 2am on 16th May.

The alarm went at 1pm and Ellen and I started boiling water, fishing all our belongings, such as gloves, radios, inner boots, camera, hat, balaclava, etc out of our sleeping bag, putting on our harnesses, boots and all the clothes we had not worn during the night (which were not many) and basically got ready to embark into the darkness.

I guess peeling yourself out of your warm sleeping bag into the cold night is one of the most difficult parts of high altitude climbing. Leaving your cozy nest and getting cold fingers before you have even start trying to put on your half-frozen crampons is just not very pleasant….but I guess it is essential.

After we forced ourselves to drink some coffee, or in my case some powder baby milk that was given to me by Alex the Basque, we crawled out of our tent to acquire these frozen fingers by putting on our crampons, adjusting our harnesses and quickly join the group, which was already ready to get going. I did not even get the chance to wish Ellen good luck as she had already been shushed up towards the mountain by her Sherpa and old friend Nigma.

I always find it stressful to start walking in a group as I usually worry that I am the slowest or that I will be in other people’s way, and finding the right rhythm normally takes me a while. The route started right on the arête, which climbs steeply out of Camp 3, and I was happy to find the rope fixed by the Sherpas.

And so we edged our way up the steep ridge until we reached mixed ground, meaning a combination of ice and rock, which can be difficult to negotiate. I had been looking at the route from Camp 2 and I never thought that I would ever have the guts or the technical ability to climb that mountain – a thought that I had shared with a few friends. “Just put one foot in front of the other like always Billi. Just don’t think about it,” my friend Monica said. And that’s what I did. I know I am slow up there and the thought of giving up and turning around often crosses my mind. However, I never do. It is like going for a run. Every morning when I put my running shoes on and start my daily jog, I want to go back home to have another coffee immediately – but I never do.

Sometimes, I am not sure what drives me to do these things as they are often painful and you feel your body reaching its limits. However, when the sun came up and I looked across into Tibet with Cho Oyu and Shishapangma, two 8,000m peaks, on the skyline, I remembered why I was doing this. Not many people in this world get to see a view like this and I felt very happy that I have had this opportunity more than once in my life.

As so often, the wind came up together with the sun and we continuously had to stop to cover our faces from the spin drift, which felt like a million little needles descending on our cheeks. But fortunately these gusts were always very short and we could carry on towards the summit.

“The summit”, I thought to myself. “How will I ever get there when I can only do 10 steps and then have to stop to catch my breath?” However, I edged on. Rita Dorjee, the Sherpa who was with me, kept on stopping too. He was tired from the previous day, as he had already reached the summit then fixing the ropes. “Didi, carry on – I am just having a short break,” he kept on telling me and every time Rita Dorjee stopped I smelled cigarette smoke. Yes!  He was having ciggies while I was trying hard to catch enough air to carry on!! Amazing!

All of a sudden I could see the summit ridge with two heads bobbing up and down. They belonged to Kenton and Alex, who had reached that point at around 9.30am and had been hanging around up there. I was pleased to still see Alex as he had promised me a few sips of Coca Cola once I reach the top of the ridge. I usually hate Coke – but up there it is the best thing since sliced bread and as I had not had anything but tea and tang I could not wait to get some of this black liquid down my throat.

Finally, at around noon I put my foot on the ridge. I had been going for about 11 hours and seeing Alex up there was a real joy. “Billi, I have been waiting for you for two hours to share this bottle of Coke with you,” he said with a big smile. Ellen Miller, the only one in our group who had been using supplementary oxygen had already been and gone. “I want to enjoy my climb up there and I am very worried about my hand and feet – and that’s why I opted to use gas,” she said prior to the climb. Using oxygen certainly warms up your feet and toes and it makes you faster.

My joy was rather short as I felt extremely depleted and I was aware of the fact that we had to abseil those 1,100m we had just climbed up – and that it was light and I could actually see the steepness and exposure of the route. Another 360 degrees look around made me realise once more what a spectacular view we were enjoying and that only 20 people in this world had seen this panorama before me – what an amazing feeling.

However, when I got on to the abseil I could tell how tired my legs and lungs were. While most of my climbing mates whizzed down the fixed lines, Jing and I were struggling and I was only able to do about 10 steps on the abseil, before I had to stop and catch my breath again.

I was very lucky to have Rita Dorjee with me as I felt much safer having him around rather than being left to my own devices during the long abseil. I would like to thank him for his patience at this point. He stuck with me rather than running down the steep ground and join his friends for some hot food in our tents at Camp 3.

However, slowly but surely I got down and I finally reached Camp 3 at 7pm – it was a 17-hour-day and I could certainly feel it. I literally collapsed in our tent and even though I was longing to fall into a deep sleep I was unable to fall asleep. I kept on thinking about our achievement and despite my fatigue I was feeling very pleased with me.

I need to emphasise though that without the work of the Sherpas, who were fixing the ropes on the mountain for three days, and without the great judgement of weather and conditions by Russell Brice, this mountain would be far beyond my abilities. So I would like to thank the Himex team for their support and their help to get me up this beautiful mountain.