I am sitting in my tent reflecting on what has been quite an eventful morning. First of all I would like to talk about our Sherpas, four of which fixed the rope to Nuptse to about 200m below the summit on Thursday. When Russell talked to them in the evening they sounded very tired. However, as the 10th May was the last day before the predicted winds were coming, the Sherpas had to go back up on Friday to fix the last few hundred metres. The way to the summit of Nuptse seems longer than we thought as the pointy peak we saw from Camp 2 does not seem to be the summit. “We don’t quite know which one the summit is,” said Tashi Sherpa when Russell asked him how far they had been from the top on Thursday evening.

At this point, I would like to describe the hard work the Sherpas do. I almost feel bad that these guys had to go up twice to fix the ropes for us and all we have to do on or around 15th May is haul ourselves up the fixed ropes and then feel like heroes when we make it to the summit. The real heroes of this world – no matter whether it is Everest, Lhotse or Nuptse, or as a matter of fact any other 8,000m peak – are the Sherpas. While we are sitting at base camp, enjoying our chef Bob’s delicious food and getting impatient for the weather window to arrive, the Sherpas are paving the way to the summit – and of course, they need their time too. 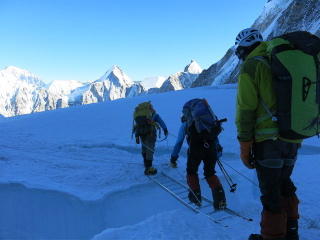 For many, the 10th of May seemed like a perfect summit day for Everest, however, without the fixed ropes to the top around 90 percent of the people here would not be able to get there. And this is what we sometimes forget – the Sherpas have to do the groundwork before we get our butts up there – and that’s why we often have to wait.

Celebrity at base camp

Of course, it is very difficult for me to sit still during this period and I spend a lot of time walking around base camp visiting friends for a chat and a cup of tea. So, when Suzanne and I were on our way to see my friend Chris Klinke, who had promised us a proper café latte this morning, we spotted some filming going on near Simone Moro’s camp.

In a way, filming on Everest is not surprising, especially not in the year of the 60th anniversary of the first ascent – but nevertheless we were curious. All of a sudden we saw a man with lots of hair and a big beard and when we heard him speak Italian with Simone, we knew that it must be Reinhold Messner.

Despite the work I do for Miss Elizabeth Hawley, I had never had the chance to meet this mountaineering legend and after Suzanne started chatting with him in Italian, we walked down to say hello. When I introduced myself as Billi and was just about to say that I worked for Miss Elizabeth Hawley, he immediately said: “Ah, you are Billi. Are you doing your work from up here?” Immediately, I felt very flattered that Mr Messner – or Reinhold as I later called him – had heard about me.

It was very interesting to talk to him about 8,000m climbing and what Everest had become and of course, it was not easy for him to see what had happened to the tallest mountain in the world. However, he seemed very interested in what was going on and he was extremely amicable and friendly. Mr Messner came to base camp as the presenter of a programme for German television about the 60th anniversary of the first ascent by Sherpa Tenzing Norgay and Sir Edmund Hillary, however, he was only here for a few hours as they had come up from Namche Bazaar by helicopter.

I have to say that I was very excited to have finally met Reinhold Messner and I was very flattered that he had heard about me. I guess that I might see him again for the numerous celebrations and activities for the 60th anniversary of the climb, if I get back to Kathmandu in time.

At the moment we are looking at a possible weather window around the 15th or 16th May, which means we would leave base camp for Camp 2 in a couple of days. Once again, I would like to emphasise that without the work of the Sherpas, I would not be able to get even near the base of Nuptse – a mountain I feel very humble towards. I am still not sure whether climbing this 7,864m-peak is within my league, however, I will give my best to follow in the footsteps of the Sherpas and get to the top.

Leave a Reply to viv