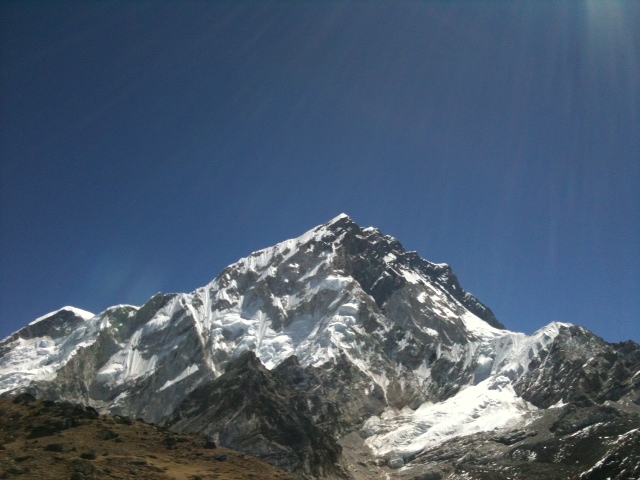 I am sitting in the Himalayan Hotel in Pheriche – even though I should be either at Everest Base Camp or on my way up Lobuje East. Well, I guess I am having to pay for my arrogance of thinking that I could make it to Everest Base Camp (5,350m) in two days – a trek everybody with a bit of sense takes eight to ten days…and very wisely so.

As I traditionally have to work for Miss Hawley until mid April chasing expeditions that are arriving in Kathmandu and are getting ready to go to the mountains, I normally fly to Lukla around 12th April and then stay one night in Namche Bazaar (3,300m), one night in Pheriche (4,200m) and one night at our Lobuje camp (4,800m), which usually works out

So what happened this year? Well, this year I was offered a ride in a helicopter all the way to Phortse, which lies above Namche at about 3,800m. Staying a night there or only going on to Pangboche at 3,900m would have been the right thing to do but I thought that I could easily go on to Pheriche at 4,200m. And so I did – and I was feeling fine. I stayed in the Himalayan Hotel, met a few old friends, had a few cups of tea and nice chats. I was enjoying myself and I was feeling great.

The following day I was still feeling on top of the world (maybe a little bit light-headed) and walked on to our Lobuje Camp, where our cooks Kur Bahadur and Phuri welcomed me with a nice lunch and a big flask of tea……and my dear friend Chris Klinke and his Everest expedition were just about to leave for Lobuje peak and I was so happy to get to say ‘hello’ to him before they were heading off. “Billi, you should really stay another night here as you will be feeling crap at BC if you go up tomorrow,” he reprimanded me. Knowing that he would be leaving to go up to stay on top of Lobuje East I said that I would consider it!

The next day I pressed on to base camp and it was wonderful to see Russell, my climbing mates, the Sherpas and the kitchen staff – and of course I felt very smart to have made it in such a short time. “Wow Billi, I have no idea how you do it,” said the Swiss mountaineer, Evelyn Binsack, who is on our expedition, when I met her on the trail.

Well, little did she – or as a matter of fact I – know how much my body was already struggling at this altitude. The following day I had a relaxed day with my team, hanging out in the White Pod, starting to write a Newsletter for Himalayan Experience, translating a few pages of Gerlinde Kaltenbrunner’s book (yes, I have been commissioned to translate her book into English) and having teas and coffees with friends. I noticed that my breathing was hard and difficult but hey – this happens to everyone who arrives at this lofty altitude of 5,350m – and even though my body was struggling deep down inside, on the outside it was doing ok. I did not look particular unwell, nor did I have to lie down and rest all the time, or was too tired to talk….and I had a big appetite and utterly enjoyed Chef Bob’s amazing food.

The following day we did our icefall training and of course I noticed that climbing up the sheer ice cliffs on the training course took most of my breath away. “Billi, we all find it exhausting,” my good friend and climbing mentor, Ellen Miller called over from her little abseil section while I was teetering on the ladder. So I finished the course twice and felt confident that once again I could manage the icefall and its menaces

…and then came the fourth night, when I woke up in the middle of the night and heard my lungs rattle. Having spent many years at altitude I know that this is a serious indication of High Altitude Pulmonary Oedema (HAPE) but still I kept on thinking that this was just a bit of phlegm in my lungs from a previous cold….hmm…but WHEN did I have this previous cold. I could honestly not remember. So I started panicking a bit but I knew that I would survive the night and I decided to speak to Doc Jen the following day.

When Jen listened to my breathing she could hear the rattling and when she tested my oxygen saturation, which should be between 75% and 85% at EBC, I started to worry. My saturation was down to 50%…but still I was chirpy, chatting away and certainly not looking like someone who would be clinically dead in an intensive care unit at a hospital in Europe.

However, the rattling and the low figures (my pulse was around 100 which is very high for me given that have a usual resting pulse of about 37 to 40) made me worry enough to pack my bags and venture back down to our Lobuje camp, where I had stayed for the last few days to recover. But I simply did not recover. Even though my saturation went up with the help of Diamox (a diarrhetic drug that supports acclimatisation), my heart rate remained high and just moving from one tent to the next gave me the feeling as if I were suffocating.

…and this is how I ended up back in Pheriche – in a nice cosy lodge with lots of people who are either coming from or going to Everest Base Camp…or who are going climbing. I am feeling a little bit lost at the moment as I do not know whether this HAPE will clear early enough to give me enough time to acclimatise to go climbing. Or whether it will clear at all to give my body enough strength to go back to Everest Base Camp and stay there for the season just to blog and not to climb. Or whether it would be best to go back down and try to recover completely and either stay the climbing season in Kathmandu or go to Thailand to the beach

Hmm….I will keep you posted!