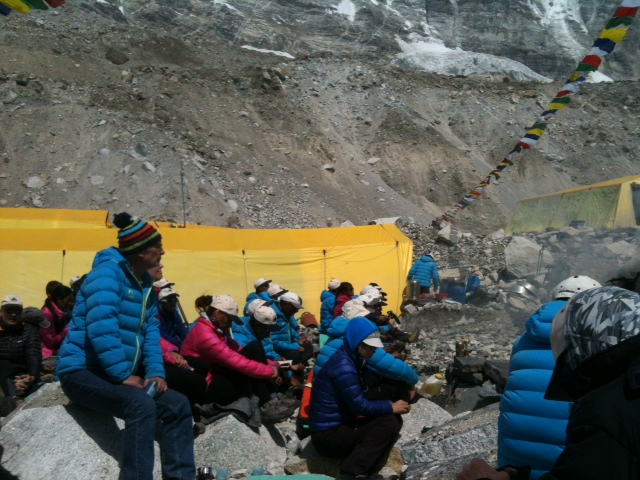 After having been at Everest base camp for four days, I’m on my way down to Lobuje to get a bit more oxygen and climb Lobuje East to acclimatise for further climbing.

Everyone seemed to have arrived at base camp and the area that is uninhabited for most of the year is covered in an explosion of orange, green, red and yellow tents.

As I had walked to base camp in about two days I needed to rest there, write a newsletter for Russell and do some icefall training, so I have not had time to go and visit other teams, who are located a little bit further up the camp.

On Monday, we had our “Puja” – the Buddhist ceremony, which is very important to the Sherpas as well as the western climbers. For about two hours our Sherpas were chanting and blessing our expedition, and every member or guide had a piece of their climbing gear blessed by the Lama. After the Puja everyone received a piece of red string, which is supposed to keep us safe on the mountain. It is a lovely tradition and even though I am not Buddhist, it means a lot to me and I would not want to climb without it.

Unfortunately, one week ago one of the icefall doctors died when he fell into his crevasse. The Icefall Doctors are a team of Sherpas who are opening and fixing the icefall for everyone else to get through. Without them not even the most hardcore mountaineer would be able to touch Everest. He had not clipped into the fixed rope and fell about 45m into a crevasse. On Tuesday, the team came to our camp and received some training on how to use avalanche transceivers,which had been given to them by some of the operators. It will certainly make their lives safer – we just hope that they will use them.

According to the icefall doctors, the icefall is looking better this season, however, it seems to be moving more quickly than in previous years. It is still early in the season though, so let’s see how it will pan out.

I will be in Lobuje, climbing Lobuje East twice for acclimatisation over the next seven days, which means I won’t be able to update this site. But thanks for checking in every once in a while and I am sure there will be more news soon.