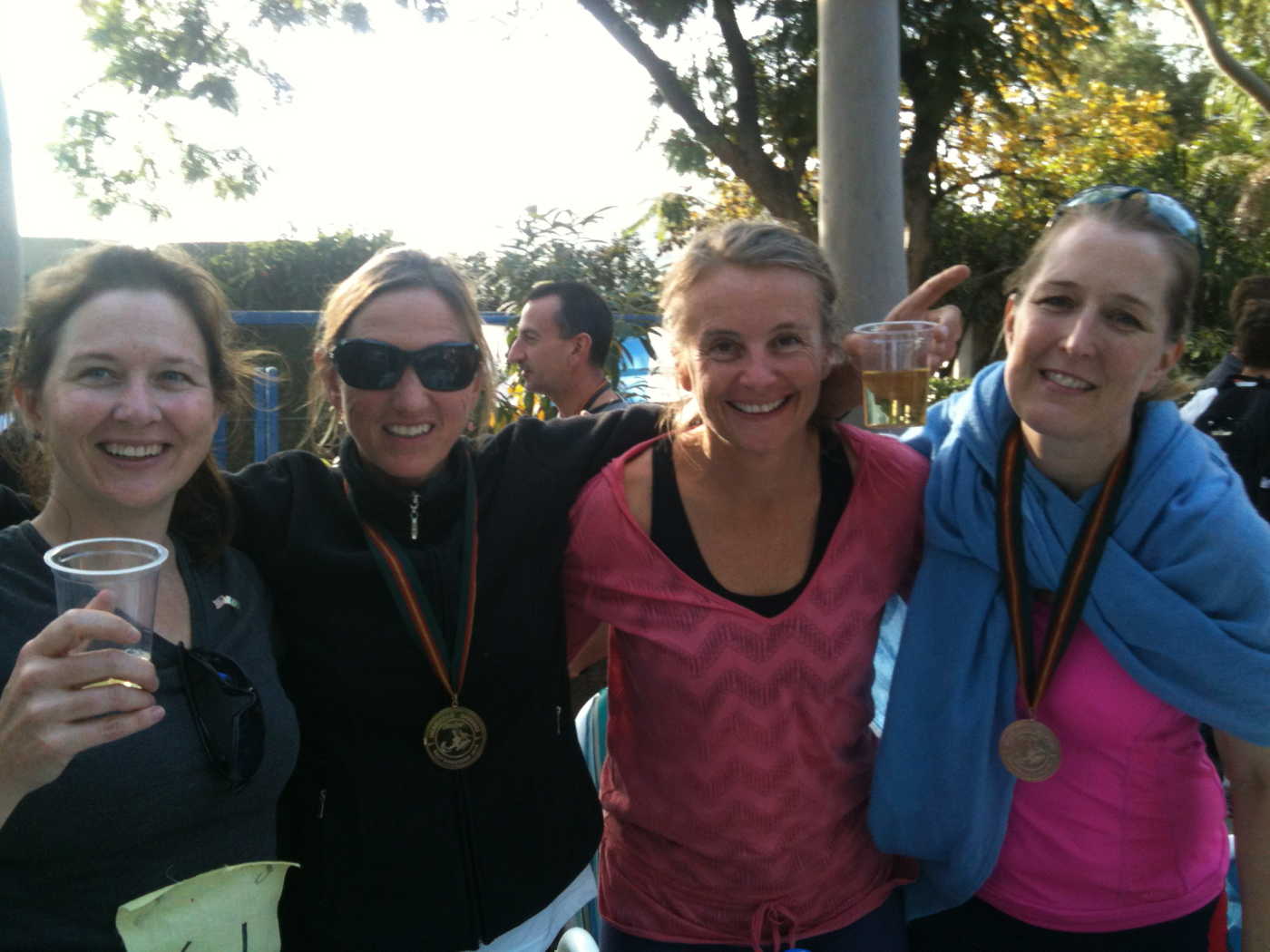 Against most people’s imaginations and expectations, life in Islamabad can actually be quite an active one – you just have to look out for all the different opportunities. There are the Margalla Hills that offer great hikes or runs, numerous gyms, yoga and Pilates classes, plenty of opportunities to bike, several swimming pools, my core classes and some great running events.

One of these events was organised by the ‘Islamabad Dashers’ last Sunday and it involved a kids run, a 10km run and a half marathon. Of course, having earned the reputation of the ‘fit woman who is always running and biking around town’ I had no other choice than sign up for the ‘Full Monty’ and do the half marathon even though I had not run 21km on asphalt for quite some time. However, I know that I have stamina and that I could do it – even if I had to crawl it.

Despite having these beautiful hills and open fields around town, due to the many security restrictions in Islamabad, the half marathon was held in the constrictions of the Diplomatic Enclave – an almost hermetically sealed compound in the south of the city, which encompasses many embassies, foreign clubs, housing for diplomats etc. and I always have the feeling that the people who live inside the enclave do not really get a true glimpse of life in Pakistan. But never mind – it is great that such events still get organised and I take my hat off to all these people, who take up the struggle with all the security restrictions and get such an event going. Thank you!

When I woke up on Sunday morning, my throat hurt and my limbs ached and I could feel the oncoming of a cold. What a bummer – I hardly ever get sick so I was a bit annoyed that it happened exactly on the ‘big day’ in Islamabad. ‘Never mind’, I thought, ‘ I wont let a common cold stop me joining a bit of fun in Islamabad.’ And as I never run these races to win or break a world record (those who have run with me know how excruciatingly slow I am) it did not really matter – well, little did I know.

On my bikeride down to the enclave I could already feel my lungs burn with every breath I was taking, as the morning air was still quite cold and the bacteria had obviously settled nicely across my lungs. I had also made the big mistake of having imbibed four big mugs of Café Latte in the morning to warm me up after having crawled out of bed into our cold house – but that was obviously a little bit too much milk for my poor stomach, which could not face any food before the race.

So, by the time I arrived at the registration desk, I was already feeling pretty crap but there I was jumping up and down ready for the race. “Ah, aren’t you the woman who I always see running in the morning?” Ramon Gonzalez, one of the organisers, greeted me. “Yes, but I am really slow,” was my response. I found out that apart from myself, only 30 other people had signed up for the half marathon and that women and men ‘over 40’ were in a separate category. Hmm – the veterans again! There were two other women in my category and my friends and CORE enthusiasts Julie, Keri and Sallee had signed up for the 10km run in this very ‘Golden Girls’ category.

The half marathon kicked off at 11am sharp and about three minutes into my run my stomach started churning and cramping trying to deal with all that milk I had been pouring down my throat a few hours earlier. ‘I never learn,’ I thought to myself as I had done this previously in another run in Istanbul a few years ago. Never mind, off I went trying to look relaxed and on top of the world. I don’t know what it is but whenever I do these races I get very nervous and I cannot find a good rhythm for my breathing – and on top of that every breath I took was as if I was inhaling a ball of fire…ouch.

The first 5km, which I spent running next to another German woman, who was obviously in the ‘young category’, felt very hard and I could see all the other 30 people running off towards the sunshine ahead of me. After the first round of the enclave, which is about 7.7km, I was contemplating to throw in the towel but then I thought about my friend Chrissie and how she had finished her last race in Kona (thanks for being such an inspiration, Chrissie!). She started the 2011 race even though she had badly injured herself a couple of weeks before the Ironman and was in a lot of pain for more than eight hours – and despite aching every single minute, she even won the competition. So, what’s two hours compared to that. Nothing!

Keeping that in mind, I plodded on with my legs feeling like lead and I started thinking of all the people, who mean a lot to me and told myself that I would do one kilometre for every one of them. And I had promised my friend Karin to do the run for her little daughter, who had been having pains in her feet lately – and all these thoughts kept me going. But still, it was rather disillusioning when I looked back and saw NOBODY behind me. “Oh no, I am going to be the last one to finish, which will be very embarrassing considering that everyone thinks I am so strong,” I kept on thinking.

This thought was actually quite interesting and made me realise how much I wanted to live up to the expectations people have of me and even though they probably could not care less, I did not want to disappoint them (this was a very similar feeling I had when I was climbing towards the summit of Mount Everest three years ago). So, I kept on going and finally arrived back at the Australian Club at the finishing line, more than two hours later.

“I think I am the last one”, I tried to utter but could not actually get a tone out of my mouth as I must have lost my voice somewhere along the 21km I had just run. But apart from the disappointment, it was great to finally get there and receive the hugs of the other three Golden Girls, who had been there for ages holding out to wait for my late arrival.

Once I had found my voice again, had some water, which was quickly followed by a beer, the award ceremony started and of course I thought that the only reason I would be mentioned would be for the ‘slowest runner of the race’. So, they went through the 10km runners – congratulations to Sallee, who got the bronze medal – and all its categories and then they moved on to the half marathon.

“For the category ‘Women over 40’ the winner is…… Billi Bierling!” I heard the Master of Ceremony blare out loudly as I was just having another sip of my cold beer. “Wow”, I said, “that is the beauty of getting old – you can actually win a gold medal even though you were agonizingly slow.” When I got over my surprise, I walked up to the podium to receive my little gold medal from the German Ambassador and blurted out “But I was so slow”, which got the response from the Ambassador – ‘But obviously not the slowest”. And there you go, he was right.

Right, I had better stop here as this is getting far too long but I just wanted to share this experience with you and the fact that even though I was upset for having struggled so much during this race, I was actually quite happy to have come home with a gold medal, which made all the difference. And as my friend Ashley said, maybe I have deserved it for all the pain (which was partly self-inflicted) I was going through in this little race. And so, I will keep on running.