I am sitting here drenched in sweat even though our little house in Islamabad is rather cold at the moment. Winter has started and the temperatures have dropped significantly and in spite of being warm outside in the sun, it requires a shawl, a hat and a hot-water-bottle inside the house. “I can’t believe I am sitting here looking like I am just about to climb a mountain,” said my friend and housemate Ashley, looking all cosy with her woolly hat pulled down to her eyebrows and wrapped in a big scarf. Ah, but why am I drenched in sweat then? No, not because of my hot-water-bottle, which is covered in beautiful multicoloured dots, but because I have just come back from another stunning run across the Margalla Hills – my life saviour in Islamabad. I know I have written about this beautiful rolling mountain side many times but every time I go there it makes me realise how important it is to be out in nature, see rare birds, dodge the ubiquitous cheeky baboons and wild boars and just gaze into the haze down into the Pakistani capital.

The hot-water-bottle – my best friend during the Islamabad winters

This morning I felt adventurous and took a little path that I have been seeing during my morning runs wondering where it would lead. The Margalla Hills feature two major trails, which are heavily frequented by expatriates as well as Pakistanis and it seems that not many people venture away from these well-trodden paths, so I thought I should find a new running route. It was certainly well worth it even though I had to fight my way through the thicket of thorny bushes and sometimes got a bit worried where I would actually end up. Fortunately, the trail took me all the way up to the ridge and I soon found myself in the well-known neighbourhood of Trail 3, the much-frequented path and I was happy to have found my bearings again. I don’t suffer from much, but I do suffer from a very bad sense of direction, which is certainly exacerbated when running through a thick forest obscuring the view.

When I am not in the big hills and have to sit in an office (which is also fun every once in a while), I guess running keeps me sane. I feel free and independent and I draw a lot of my energy from it and I have the feeling that on the rare occasion when I don’t go for a little jog before going to the office in the morning, my face just does not wake up all day.

Looking down into the Islamabad haze

And it is fun to get other people to go out and run. “Billi, you have no idea how good it is to have you back,” my friend Rosie, who sadly left to go back to the UK on Sunday, told me. “I feel more energetic and started running outside again. I would not have done this without you. And on top of this, my Core feels strong!” It is comments like this that make my day as there is nothing better to motivate the people around me. My old running mate Sebastian was also very pleased when I came back as he had completely abandoned our regular morning runs during my absence. “It is great to run with you Billi – it is like running listening to BBC radio,” he said smilingly. Well, I guess the only difference between BBC radio and I is that there is certainly no ‘switch-off’’ button to be found on me.

Staying with the subject of running, at the beginning of November I flew to Istanbul for the weekend to meet my friend Ale and join the 15k run we did two years ago. The trip was a bit mad as I did not pay attention when I booked my Qatar flight and failed to notice that I had a layover in Doha for eight hours. As it happened, the actual travelling time was longer than the time I spent in Istanbul. But it was well worth it. Istanbul is an amazing city and it is so true when they say ‘Where East meets West’. It is certainly a city that never sleeps, with amazing restaurants, bars and a very interesting mixture of people. It is vibrant, which is always very invigorating when you live in a city like Islamabad, which was purpose-built to be the capital in the 60ies and sometimes lacks the energy and vibrance of a bustling town. 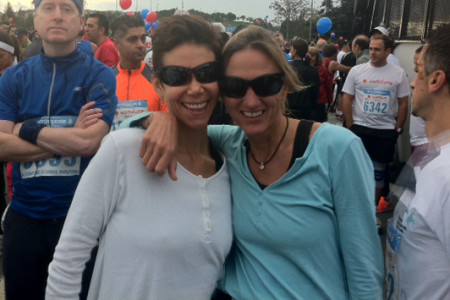 Ale and I after the race

Despite the long journey, the flight-induced swollen feet and the brand-new running shoes that Ale had brought for me from Switzerland and had to be broken in during the run, I improved my time from two years ago by almost three minutes (I wont tell you my actual time as it is still not that fast ;-)). Taking part in such a race is always a lot of fun and I find it so interesting to watch the people, who come in all shapes and sizes, some of them with the most peculiar but fast running styles. It is wonderful to see old and young, the fit and ‘not-so-fit’ get together and run across the Bosphorus bridge from Asia into Europe. It was a beautiful day and when we ran towards the old city featuring the Hagia Sophia and the Blue Mosque, which were dipped in the most amazing morning light, I knew why I had just flown for more than 20 hours to get there.

It was also brilliant to see my friend Ale again, practice some CORE moves with her and go out for a drink in the hustle and bustle of this vibrant city, with a population of 13.5 million people. Ha, and among these 13.5 million people, a number which probably gets very inflated by the countless tourists, I bumped into Ayden, a Turkish climber who I met at Everest Base Camp this spring. Ayden was an interesting character, who tried to carry his bicycle up the highest mountain in the world but was intercepted by the Nepali liaison officers, who confiscated his bike and carried it down to Namche Bazaar. Ayden summited without his bike but got into a bit of trouble on the way down, which left him with frostbite and now with four missing fingers on his right hand – but that is a different story.

Running over the Bosphorus Bridge from Asia to Europe

I will be in Islamabad for another month before I head back to Bavaria for Christmas and then to Switzerland to do another three-month-assignment with the SDC, which I am very much looking forward to. After that it will be back to Nepal to help Miss Hawley collecting mountaineering data until mid April before I head back to Everest Base Camp to put my ‘blogging hat’ on again and probably attempt to climb a mountain in the area.

Until then, I would like to thank you for your continued support and interest in my little adventures!