The Khumbu Region is beckoning

After almost one month in Kathmandu it is time to leave again and go to the Everest Region – an area I know so well and I am very much looking forward to going back to and taking in the stunning views of the surrounding Himalayan giants.

I am flying to Lukla – the gate to the Everest Region – on Thursday morning and even though the climbing season is still on, it is a good time to leave. Most expeditions have left Kathmandu, which puts my mind to rest as I am not leaving Miss Hawley and my colleague Jeevan in the lurch.

After having broken the neck of her femour last summer, Miss Hawley has had an amazing recovery and even though she finds managing stairs and walking in general difficult, she is still out and about meeting teams – something I have great admiration for. “The doctor told me to rest but of course I won’t,” she told me the other day – and that made me think that the old lady and I do have something in common after all.

The last two weeks have been extremely busy with me interviewing almost 80 expeditions, mainly going to Mount Everest but also climbing other mountains, such as Dhaulagiri I, Annapurna I, Cho Oyu and Manaslu. This year, there seems to be a trend to do more than one peak in a season and a bunch of climbers are first tackling Annapurna I, which is deemed a very dangerous mountain, and then going on to climb Dhaulagiri I. I truly hope it will all go well! 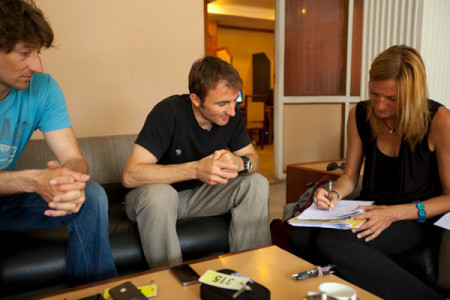 Apart from rushing to various hotels meeting expeditions I have really enjoyed teaching my CORE classes at Sam’s Pranamaya yoga studio and spending some time with the seven Nepali ‘Seven Summit Girls’. They are a great bunch and it is wonderful so see how they inspire their fellow Nepali women to follow some outdoor pursuits. Once a week they organise a walk up the surrounding hills for experienced hikers as well as for complete newcomers.

“On Saturday, we went up Shivapuri – the second highest hill in the Kathmandu valley – and we had to walk really slowly as there was one girl who had never hiked before,” Shailee told me during our CORE class, which I teach on our rooftop every Monday morning. “But even though she had a tough time, I am sure she will join us again.” 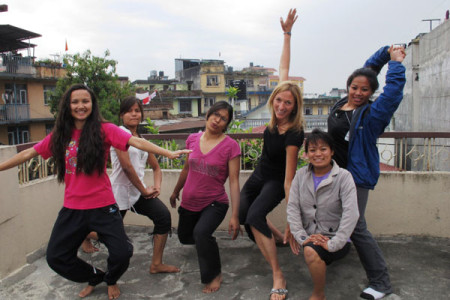 Exercising on the rooftop in Kathmandu

It has been a pleasure to hang out with the girls and I hope they will find sponsors for their great plan to do the Seven Summits (the highest mountains on the seven continents), which is something that has proved quite difficult. “We got some support from the government for climbing Everest, however, finding support for our new goal is quite difficult,” Shailee, who seems to be the group’s spokeswoman, continued.

And so I leave again, which seems to be part of my life, however, I never forget the people, who are dear to me. I am still in daily contact with my friends and former colleagues in Bern by emailing them the ‘thought of the day’ and finding out what is going on in the Swiss capital. I miss them and I would like to thank them for having given me this great opportunity to work in the headquarters of the Swiss Humanitarian Aid in such a great and friendly working environment!

I will be in touch again from base camp, however, for more regular updates, check out the Himalayan Experience Newsletter, which I will be writing over the next few weeks.