Warning: Declaration of wp_bootstrap_navwalker::start_lvl(&$output, $depth) should be compatible with Walker_Nav_Menu::start_lvl(&$output, $depth = 0, $args = NULL) in /home/customer/www/billibierling.com/public_html/wp-content/themes/billi-bootstrap/wp_bootstrap_navwalker.php on line 22
 Billi Bierling – Journalist and Climber | A Morning Out in the Kathmandu Valley

A Morning Out in the Kathmandu Valley

It has been less than 36 hours that my plane touched down in Kathmandu and even though it is good to be back in the madness of this sprawling city, it was great to get out into the surrounding hills on Saturday morning. After five months of living in the quiet and well-organised town of Bern in Switzerland, it was interesting to be faced with the traffic, the dust, the dirt and the noisy hooting of the cars. 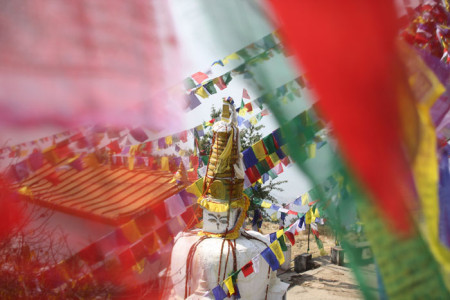 The Stupa on top of Jamacho Peak (Richard Bull)

When I was biking into Thamel last night, I watched a policeman trying to regulate the rush hour traffic and I truly felt sorry for him. I have no idea how he managed the thundering wave of oncoming cars, motorbikes, scooters, bicycles and pedestrians but he seemed to cope – even though with a slight sign of stress on his forehead. The Nepalese capital can no longer handle the vast number of vehicles, which has now reached over one million, rolling up and down its pothole-filled roads, and in order to cope, the Kathmandu authorities have decided to widen the roads in the city.

At first thought, this seems like a good idea given the fact that without proper road infrastructure, economic development is not possible. The sad thing is that dozens of bulldozers are currently scouting the city for structures that were built on public land and are too close to the road – and that seems to be everywhere. 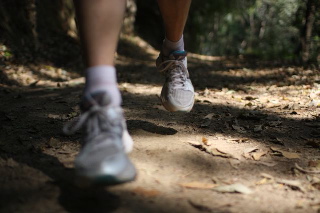 Running in the forest (Richard Bull)

On our bike ride to reach Nargajun Forest, where we started our run up Jamacho Peak, we noticed that the front of every single house on the road had been demolished. “I thought that Kathmandu cannot be made more ugly than it already is, but they seem to have found a way,” said Betty, an American resident of Kathmandu.

It was really sad to see the people helplessly looking at the facades of their houses that had been reduced to a pile of rubble. Well, maybe not always helpless as in some cases, house owners have been reported to fight off the bulldozer by snatching away the keys, which delayed the demolition by a few hours.

Up in the hills

For this reason, getting into the hills, which are very accessible from the city, is becoming more and more of a must for Kathmandu residents and it was great to see that not only expats were making the most of the beautiful surroundings on this stunning day. On our run up the stone steps, during which the car horns were increasingly replaced by bird songs, we saw several families, young couples, the seven Nepali women, who are striving to do the seven highest peaks of the seven continents (the Seven Summits) and 79-year-old Betty and her friend from the States. 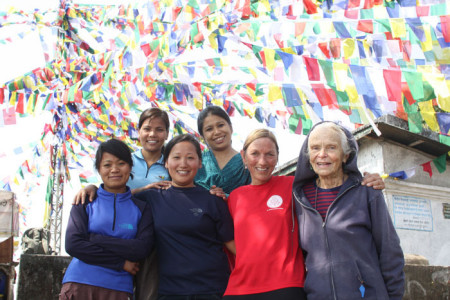 “I think it is a great way to exercise and I am planning to come here to celebrate my 80th birthday in 10 days,” this inspiring lady told me while she was motoring up the stairs with her walking sticks. Jamacho Peak is about 2,200m high, which means it is around an 800m ascent from the capital city, and it took Betty a mere 1.45hrs to get there.

Meanwhile, the Seven Summit Girls had arrived and were marvelling at my planking. “I need to do something for my stomach, so can I join you,” asked Pema Diki Sherpa, who together with the other six women has already climbed Mount Everest in Asia, Mount Kosciuszko in Australia and Mount Elbrus in Europe. “Our next goal is Kilimanjaro but before that we are trying to motivate some of our people to enjoy the mountains,” she continued. 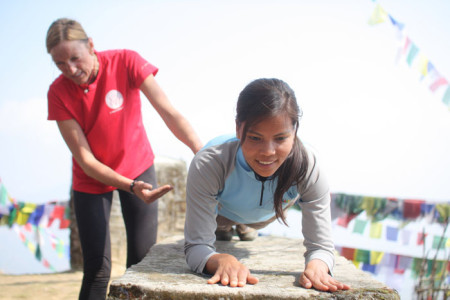 Teaching how to plank (Richard Bull)

And so they did. A young Nepali lady was part of the team who told me that she had never walked in the surrounding hills before. “I am so happy that I made it as I want to trek to Everest Base Camp this autumn and I have no practice at all,” she said. “And on top of that it is wonderful to get out and be above the smog of the city.”

It was a magnificent outing but it also made me realise how important it is for Kathmandu residents to go out into the hills, breathe the fresh air and listen to the singing of the birds. However, the best thing was to see that Nepalis are starting to realise that being out with their friends and families is a good alternative to spending the weekend in the city.

Leave a Reply to Nepal View