The end is nigh

After having spent five months working for the Swiss Humanitarian Aid in Berne, time has come to say goodbye to Europe and head back to my other life in Nepal.

View towards Eiger, Moench and Jungfrau from the Gehrihorn

I have had a very interesting and fulfilling five months in the Western world and like most places I live, I have once again met amazing people here. First and foremost my lovely colleagues, who have been incredibly helpful in guiding me through the maze of Swiss paperwork, logframes and credit proposals as well as making me laugh – and that at least more than once per day.

No matter what anyone thinks of the Swiss, to me they have been incredibly funny, flexible and well-spirited and I have not noticed the rigidness or square-thinking many people accuse the Swiss of. There has not been a single day when I was not looking forward to going to work.

Of course, the Swiss can be very rigid, especially when it comes to their coffee or lunch breaks. No matter what time you get to work (I usually arrive about a minute before the coffee break), at 9am on the dot the voice of at least one of my colleagues fills the corridor with “COFFEE” and shortly after everyone comes out of their rooms and meets for a quick chat, a coffee and sometimes even a croissant or some other Swiss delicacy.

The reason why I hardly ever get to work much before coffee time is that I have to be well-prepared for my very important daily task: I have to come up with the “Quote of the Day”, meaning that I have to give a quote (which are mainly stolen from great minds unlike my own simple one) when we are all gathered together sipping our beverages. It has become such an institution that my colleagues are very disappointed when I arrive at work ill prepared without the quote. Monday’s quote for example was:

I have promised my colleagues to keep up the tradition from Kathmandu and maybe even from Everest Base Camp and I hope I will be able to meet their high expectations. At this point I would like to thank the E/MM department of Switzerland’s Humanitarian Aid for looking after me so well, bearing with me and finding my jokes and quotes funny – I will really miss you!

In January, I was very lucky to be given the opportunity to lead a trip to Tanzania and have the chance to climb Kilimanjaro, the highest mountain on the African continent. My expectations were not very high as I had been warned about the number of people and the bad weather. Prior to my trip, my friend Yves gave me a poncho and an umbrella and told me: “Billi, you will thank me as you will be using this every single day.” Well, thanks to Yves’ equipment Murphy’s Law kicked in and I did not see a drop of rain and enjoyed beautiful sunshine for the whole trip.

Our great guide Ian and I in front of Kili

Climbing Kilimanjaro is very different from climbing in the Himalaya. It is a relative quick affair and even though you reach a high altitude of almost 6,000m, the mountain is climbed in less than one week. People feel the altitude and many get sick, however, due to the fact that the trekkers don’t spend much time at this high altitude, it is relatively safe. And I have to say the scenery and vegetation zones are beautiful. I really enjoyed being in Tanzania and the smiles and good atmosphere amongst the people was truly fascinating.

When I got back from Kilimanjaro, it was the start of the cold weather period in Europe and temperatures dropped to as low as -20 degrees in my hometown Garmisch-Partenkirchen, which was absolutely beautiful. Many people were complaining about the cold but I was really enjoying the real winter. Going for a run meant wearing two layers on the legs and at least three layers on top as well as very thick gloves, a warm hat and a scarf – and we all know: “Wrong weather does not exist – only wrong clothing”.

Of course, Europe’s cold snap has left more than 600 people dead, mainly in the Eastern parts of the continent, and in Russia alone more than 5,000 people suffered from hypothermia and frostbite, including 150 children. Over the past two weeks, 215 people have died in Russia, 135 in Ukraine, 82 in Poland and 45 in Italy. However, the end is in sight and the weathermen have predicted temperatures to rise again over the next few days. 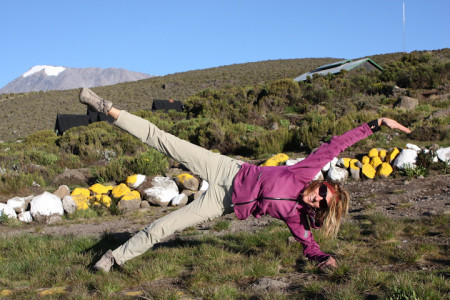 Sorry, yet another planking picture - this time in front of Kili

So, for me the coming weeks will be filled with finishing my work at the Libya Desk for Switzerland’s humanitarian aid, making the most of the beautiful snow and the Alps on my skies and getting ready for yet another season in Nepal – and I am very much looking forward to it. I will be back in Kathmandu in mid March and will be back in my bicycle saddle to help Miss Hawley for one month before I embark on another little expedition with Himalayan Experience, who, once again, I will be writing the newsletter for.

I will keep you updated once I am back in Asia on what is happening expedition-wise but before that I would like to thank everyone, especially my friend Urs, who had to put up with me in his flat for five months, for making my time in Switzerland such a special one.