In my last entry I was boasting that I would be doing a half-marathon in Lausanne on 30 October, however, these 21km were reduced to a 10km race due to various aches and pains by the participants.

A couple of weeks ago, my friend Ale, who I usually do these races with, pulled her hamstring and could hardly walk, let alone run. So, we were wondering whether we could actually run at all given that she was limping and I was still suffering from frostbite on various toes of my right foot.

Only a few weeks ago, we both read my friend Chrissie’s blog, which she wrote after her amazing victory at the Ironman race in Hawaii. In her blog she talked about her injuries she was still suffering from after a bike accident she had a couple of weeks before the race. Here is a short extract from her blog.

“Hamstrings, calves, even my shoulders cried out for me to stop. I had that ugly voice on one shoulder suggesting I quit and take the easy route. But I hate the goddamn easy route, and I know that I can never rest until I know I have given it absolutely everything. So I ignored the pain.”

…and that is what we did this Sunday, even though we decided to go for the shorter distance and run the 10k rather than the 21k. “My hamstring was also screaming for me to stop and I don’t think I could have run a half marathon but I am so pleased I pushed through and finished the 10k in 50min26sec. Whenever I felt like stopping I thought about what Chrissie said in her blog and it really helped me,” Ale said after the race.

It was actually quite amazing that we managed to get our aching bodies to the start of the run on Sunday morning. The night before we were both lying on the sofa trying to nurse our various niggles. I was rubbing Arnica cream into my numb and swollen toes while Ale was displaying the most interesting positions to stretch her legs and ease the pain in her hamstring. And every time one of us got up to refill our glass of wine or get another packet of crisps (yes, we try and live healthily before our runs), we were only able to move in hobbles across the flat.

As the run only started at 10:45am (which is rather late for the Swiss given they are normally in the office at 7am!) and the clocks had been changed to wintertime during the night, we were able to have a leisurely morning sipping our coffees on the terrace in warm sunshine. It was a gorgeous day and it was just perfect to go for a little run. “It feels weird to only do the 10k but I guess it is better than nothing,” said Ale worrying about the short distance.

Together with Ale’s friend Evguenia, who was a first time runner, got to the start at 9.30am and we could just see the marathon crowd heading off. The atmosphere was great and I have to say the Swiss are phenomenal at organising an event like this – very different from New Delhi where Ale ended up having to dig for her dropped off bag herself as the helpers were unable to find anything in the huge pile of individual items.

The starting shot was fired at 10.53am on the dot and off we ran. Ale and I pushed each other forward with either her or I being in front. It was a gorgeous run through the pretty city of Lausanne and we finished at the imposing castle of Ouchy by the lake. For the final kilometre Ale sped up and managed to finish 14 seconds ahead of me. “I think this is the best time we ever ran,” she said after I crossed the finishing line in 50min40sec.

And even though our 50-minute-time seems pathetic compared to the 29min58sec achieved by the fastest male runner or the 34min55sec of the fastest woman, we were both very pleased to have finished the 10k given our damaged or recuperating bodies. Evguenia finished in an impressive 59 minutes. “I am so pleased as I thought it would take me at least 1 hour and 15 minutes,” she said with a huge smile on her face. 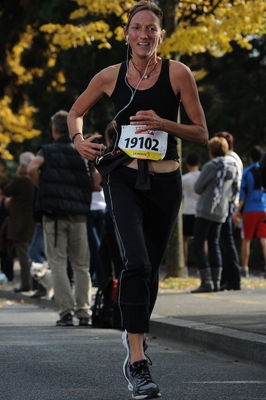 Like my toes, the rest of my body is also still in its recovering phase even though it has been doing quite well, given that I was standing on top of Manaslu less than one month ago. From the very first day in Bern – which was only six days after the summit– I was running in the forest near my friend Urs’ house even though Iit has only been possible with the use of a head torch as it is still pitch black when I leave the house at 6.30 in the morning.

As far as my life in Bern is concerned, working there has been very interesting and I am learning a lot as the job I am doing is something I have never done before in my life. It is also fantastic that I can go and see my friends in Lausanne and still do CORE classes with Ale once or twice a week – who would have thought this would be possible after we all left Pakistan a few months ago.

My first month in Europe is reaching its end and I will definitely keep you posted on any more adventures here.

Everest Season is winding down

Getting ready to head out