Since I wrote my last entry, my life has literally rushed past me as it took me only five days to get from the summit of Manaslu to my new job in Bern. I am sure it is not the record but my poor body and mind were struggling to keep up with this rapid change.

The villagers of Samagoan collecting their loads at base camp

After the villagers of Samagoan had picked up most of our gear, the whole expedition left base camp at 6am on 8th October and descended to Samagoan, where we were waiting for our helicopters to take us back to Kathmandu. As we were using small helis, it was only possible to take three or four passengers at a time, and knowing that my flight to Munich was leaving the same day, Russell very kindly let me jump on the first helicopter.

The first machine arrived at about 10am and after having landed on the way to load and unload passengers, we were off to Kathmandu. The beautiful flight took about an hour and I was catapulted back into the busy life and heat of Kathmandu in an instant. I was lucky that my luggage was on the same helicopter and I was able to whizz home in less than 15 minutes (the fact that it was Saturday and Dashain – the biggest holiday in Nepal – was also of my advantage).

Both Sam and Richard, my two flatmates, were at home and we had a quick coffee and a short catch up before I rang Miss Hawley to tell her that I was back. “Can you be here in 20 minutes,” she ordered. I told her that I would have to have a shower before I got on my bike and presented myself to her, but her answer was: “Forget about that shower and come here as quickly as possible!”

Of course, I did not want to enter city life with all the grime and dirt from the past four weeks and took the liberty to have a shower before I gathered my paperwork of all the interviews I had done at base camp and go on my bike. After having climbed an 8,000m peak it always feels weird to cycle again as the body is just not used to doing this kind of exercise anymore. When I arrived at Miss Hawley’s office, I was happy to see her back at her desk working happily away as she had slowed down significantly after she had broken her hip at the beginning of July. “So, what are you climbing next?” she greeted me – and that was it. We immediately sat down and I updated her on the expeditions I met just after comin off the summit.

After having spent about an hour with Miss Hawley, during which she gave me quite a bit of ‘homework’ to do (chasing up expeditions we missed) I cycled to Thamel to meet a few friends for a quick drink at Sam’s Bar. I was very happy that I had time to drop in and say hi and bye to Verena, who runs the bar and who has become a good friend of mine over the years. “Billi, you look great for someone who has just come down an 8,000m peak,” she greeted me with a ‘Sam’s Special’ – one of her welcome drinks for special guests. My friend Ale from Islamabad also happened to be in Kathmandu and together with Sam we had a very quick drink before I had to go home to unpack and pack for my three-months stint in Switzerland. 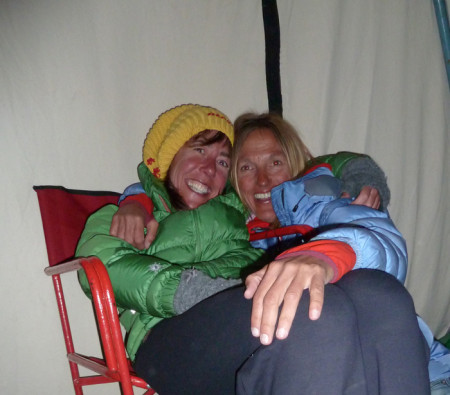 Monica and I at our summit celebration at base camp

….and then I got on the plane, flew to Munich, took a train to my mum’s house in Garmisch, had a coffee and a shower and got into my 25-year old Volkswagen Passat to embark on my six-hour-journey to Bern.

I did not think that I would make it but I managed to be in the office in the Swiss capital at 9am the next morning. “Wow, directly from 8,000m to our office,” I was greeted by my new colleagues, who must have had a look at my website as I did not say anything about my weird passion of climbing big mountains. And this was certainly a lovely introduction to the staff of the Swiss Development Corporation (SDC) and I have to say during my first week they have certainly lived up to my expectations.

My new colleagues have been extremely welcoming and helpful and they do not seem to mind that I am asking many questions regarding my new post I know very little about. I have now managed my first week and I hope that my second week will be a little bit more coordinated as it has taken more or less until today for my mind to arrive where my body has been for one week.

Physically I am feeling fine even though I managed to get slight frostbite on my right foot, which is due to the fact that the cable of the electric boot heater had unplugged itself from its battery pack on that side. I am nurturing it and I am sure I will keep all my digits, however, it has also made me realise how difficult it is to judge when your feet are ‘just’ cold and when you are getting frostbite.

I will now have time, good food, fresh air and good medical care (if needed) to recover from this latest expedition, however, I have the feeling that I am almost back up to speed again. I am planning to run a half marathon in Lausanne at the end of October and even though this may sound impressive, it is nothing compared to Karl of the Walking with the Wounded team on our expedition.

Karl had already run more than 30 marathons this year and he is planning on completing 52 this year – even though he could not run for the last five weeks. I am sure he can do it and I wish him all the best. But for me, the next challenge is finishing the 21k in Lausanne.

Thanks again for all your support and interest – and having a look at my website!