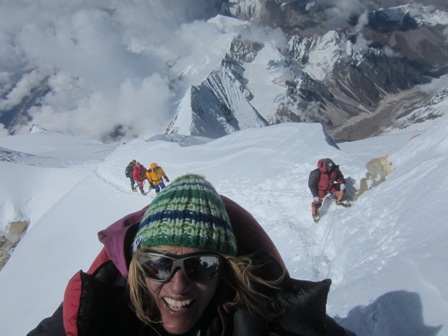 “Billli, where exactly are you?” Russell called me over the radio. “I am about 10 minutes away from the real summit,” I replied from the point everyone calls the “rock tower”. I had been climbing for exactly eight hours and as Russell was determined that I should make it back down to Camp II after the summit, he wanted me to hurry up. Most of my climbing mates, who had been using supplementary oxygen, had already made it back down to Camp IV, where they were re-hydrating and getting ready to descend to the safer altitudes of Camp II. “I am already on my way down to base camp,” I heard Herbert say over the radio, who probably could not wait to get some proper food after hardly having eaten for three days.

I inched my way up to the last bit of the cornice of the eighth highest peak in the world and when I heard Pasang Kami, the Sherpa who I was climbing with me, call out ‘Summit”, I knew that this must be the highest point. The real summit of Manaslu is a tiny little tip, which can only be accessed via a very unstable cornice and without our Sherpas, who had fixed the rope to the top, only a few climbers would probably dare go there.

“Billi, this is a long ten minutes,” Russell said and I could hear that he was getting worried that I would take me too long. “You know, you are only half way there.” And of course, he meant that the summit is only half way, so Pasang Kami and I quickly took our summit pictures (which is probably the worst summit picture of all my 8,000m peaks) and started our descent. I felt extremely happy and (literally) elevated as reaching the top of Manaslu on 4th October 2011 was the first time that I had reached an 8,000m peak without the use of bottled oxygen. It is a great feeling to know that my body and my mind are capable of going to these heights without this assistance, however, it also made me realise how much harder it is. “Climbing an 8,000m peak with bottled oxygen is like climbing a 6,000m peak,” the amazing mountaineer, Gerlinde Kaltenbrunner, once said in an interview and she is definitely right.

It took me about twice the time my teammates took and of course I was more susceptible to the cold. Using supplementary oxygen stimulates the blood circulation and the climbers are less likely to get frostbite. Fortunately, Russell had picked the perfect summit day and even though it was still about – 20 to – 25 C there was no wind, which usually lets the temperature drop by several degrees. “I don’t think we could have made it the following day, when the second part of our team went to the summit. It would have been too windy and too cold for us,” said Pierre from France, who also summited without supplementary oxygen.

Now I am back at base camp and it was great to see the reaction of some of the mountaineers, who traditionally climb without oxygen. “Billi, you look great and I can see the pleasure about your achievement in your eyes,” said Silvio Mondinelli from Italy. And yes, I am feeling pleased about it, however, I can feel that my body suffered a little bit from the lack of oxygen, drink and food for about four days. My lips and tongue are burnt so badly that every piece of food or drink I put into my mouth burn like hell and it is difficult for me to appreciate the delicious food of our kitchen team. My toes (especially the ones of my right foot where my electrical boot heaters were not working) have slight frost nip, which means they are red and swollen and I cannot really feel them. “I think you might lose some skin around your toes but you don’t have to worry – the feeling will come back and you will be alright,” Monica calmed me down. My body looks emaciated and when I came back down to base camp, all I wanted to do was have a good wash as I felt so filthy that it almost felt inhuman.

You all might ask yourselves, why I, or as a matter of fact my fellow climbers, are doing this but I guess there is a certain addiction to high altitude climbing. When I started with Mount Everest in 2009, I thought that this experience would ‘kill the bug’, however, it only started it and being reduced to the bare minimum of life up there is an amazing feeling. “I think it is great to appreciate the little things in life again when you get back to civilization,” my friend Ellen Miller, who has climbed several 8,000m peaks, once told me.

…and this is exactly how I feel. At the moment I cannot wait to get back to Kathmandu to have a real shower at home, brush my hair and put on some proper clothes. I cannot wait to go out with my friends, have a glass of wine and a good meal (which in this case will be airline food from Qatar Airways as I am leaving for Munich a few hours after arriving back in Kathmandu). And I cannot wait to get home to my family to spend some time with Mutti, Mausi and Tante before I get into my 25-year-old Volkswagen Passat and drive to Switzerland to start a new job in Bern on Monday.

The thought of starting work in Bern on Monday, only five days after standing on top of the eighth highest mountain in the world, seems a bit rushed, however, it was the only way I could do it. Of course, I have been doing the interviews for Miss Hawley and I am pleased that I was able to meet many teams directly on the mountain. And even though I will be gone for four months, I will definitely be back to assist her next spring. But until then, I will enjoy being in Europe for a while and I am looking forward to spending some time in civilization, with good food, skiing and the proximity to many of my friends, who I will definitely go and visit.

Thanks again for all your support, which means a lot to me and definitely gave me the strength and determination to reach this 8,000m peak without using bottlede oxygen.

Office with a view