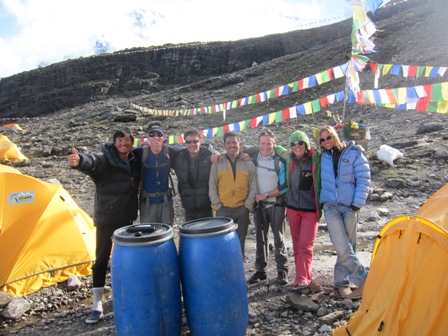 The crew - Ryuzeki, Adrian, Narly, Jaime, Brian, Monica and I

This is just a brief update to let you know that we had to abandon our summit attempt and are back at base camp. After having spent one night at Camp I at 5,570m, during which it continuously snowed and left about 50cm of fresh snow on the ground, we were called back by Russell, our expedition leader. “The weather forecast has changed tremendously since you left base camp and it does not seem to stop precipitating in the next few days,” he told us over the radio.

We had been at Camp I for about 24 hours and it had been snowing continuously the whole time. It was probably a good thing that we were there as we were able to free our tents of the heavy snow, which had made several tents of other teams completely collapse. This was certainly the most snow we had seen since we have been on the mountain and the avalanche danger was getting higher by the minute. Our second group had already reached Camp II the previous day and they were waiting for another day to come down to the safety of base camp – however, our group left Camp I at about 5pm to get down for the night.

The following day the other group descended, however, they had quite a precarious way down due to the amount of fresh snow that had fallen and not consolidated with the old layer. “The descent was hairy and going through the hourglass, which is a steep section of about 200 vertical metres, was certainly not easy,” said Adrian, our guide. The guides were actually triggering avalanches to clear the mountain, which certainly worked and everyone was back at base safe and sound at about lunchtime on Sunday.

Russell has been watching the weather continuously for the past two days and he said it was amazing how drastically it had changed. Our tentative summit dates of 26th and 27th, which had initially looked very calm and relatively warm, had become windy and snowy. Well, I guess this is Manaslu and it was not very different from last year. In 2010, we summitted on 1st October as the weather just had not been kind to us before that date.

As I am writing this I am sitting in a huge cloud at base camp and I can barely see the tents next to mine, however, at least it has stopped snowing. Nobody knows when the next weather window will open but it is possible that we will be stuck at base camp for a while to let the snow up high consolidate to minimise the avalanche danger and let the weather settle down. Once, the conditions have improved our Sherpas will have to climb back up to Camp IV to re-open the route and dig out the fixed rope again, which will be hard work.

I am hoping very much that another window will open as I am feeling strong and determined to reach the summit of Manaslu without the use of supplementary oxygen. However, if the Weather Gods do not allow our ascent this year then I will accept it and come home safe and sound.

Once there is a new plan, I will let you know, however, for more information go to www.himalayanexperience.com