It has already been a couple of days since an earthquake shook eastern Nepal and partly affected Kathmandu. Fortunately, the epicentre was far away from the capital and the long-looming fear of the city being flattened by a huge earthquake did not come true. “Everything is alright down here, however, the people seem very scared that the ‘Big One’ might follow soon,” Richard, my flat mate and ‘robot’ Richard told me when I called him to find out more about the situation in Kathmandu. 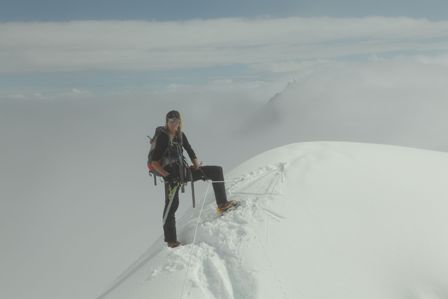 Billi Bierling poses on the way to Camp II

When the earthquake happened at 6.30pm local time on Monday, our guide Narly, Pierre from France, four of our Sherpas and I were at Camp III at 6,650m settling in to spending the night there. We were just having a chat when all of a sudden we felt a big thump, which was followed by a huge avalanche coming down to our right. “I think the earth has just moved and opened a crevasse,” Narly said looking a bit worried at the huge seracs that were looming behind our camp. I was sitting inside my tent and all of a sudden I was feeling very small and vulnerable. The big tremble in the mountains made me realise how easily everything could collapse around us. I guess we were very lucky that the epicentre of the 6.9 quake was far away and did not affect our expedition very much, however, it made me feel very humble towards the mountains.

While I am writing this, I am lying in my tent listening to the sound of the relentless rain that has been falling non-stop since we came back from our second acclimatisation rotation two days ago. In order to acclimatise, we spent one night at Camp I (5,560m), two nights at Camp II (6,250m) and Pierre and I, who are the only two climbers in our expedition attempting to summit without the use of supplementary oxygen, spent one more night at Camp III (6,650m).

I am very excited to be climbing without an oxygen mask this time (it’s easier to talk 😉 but I am also aware of the fact that ascending Manaslu ‘without gas’ will feel very different from my first ascent of the 8,156m-mountain a year ago. “Climbing an 8,000m peak with supplementary oxygen is like climbing a 6,000m peak and usually the time spent on summit day will double,” Russell explained to me. Mentally, it will be hard to see climbers, who are normally much slower, overtake me and reach the summit in half the time but my main worry is frostbite. Our extremities, such as fingers and toes, are much more likely to get cold without the use of supplementary oxygen. “When climbing without oxygen, the blood thickens and the circulation of the body slows down significantly,” my friend and expedition doctor Monica explained. “Our bodies can cope without food for 48 hours – but not without drinking, so keep melting snow up when you up there,” she explained during our last summit briefing.

As this year’s expedition is very big, the group will be divided into two and the ten soldiers of ‘Walking with the Wounded’, who are part of our team this year, will be attempting to reach the summit first. It has been amazing to see these young lads get up to the high camps despite their injuries. “It has been the hardest thing I have done in my life – even though I am used to putting myself through a lot of pain,” said Karl, who was severely burnt in Iraq and has already run 35 marathons this year. “Getting to the summit will be a huge achievement for me and I have certainly learnt what it is like not to be the strongest in such a feat,” he continued.

Like every year, this expedition would not be possible without the hard-working Sherpas, who are carrying tents, sleeping bags and mats, cooking sets and oxygen bottles to the high camps as well as fixing the rope all the way to the summit. Their strength does not cease to amaze me and sometimes put me to shame. Here is an example: when we had arrived at Camp III, we were struggling to build platforms for our tents even though we had been carrying very little in our packs. We were closely followed by four of our Sherpas, who had left base camp in the morning (for us this was a three-day trip), and when they arrived with their heavy loads, they simply took the shovels from us and pitched the tents in no time. “And now we are fixing 400m of rope towards Camp IV,” said Nigma, also known as ‘Lhotse Nigma’ as he had summited the 4th highest peak with my friend Ellen in 2009 and was my climbing partner on Lhotse this spring. 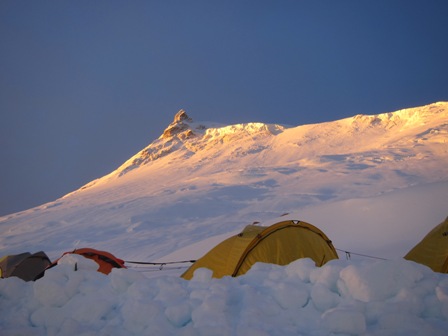 I will be at base camp for another couple of days and our group will be leaving for their summit attempt on 23rd September and hopefully reach the summit a few days later. The weather forecast for the upcoming week is looking good with very low winds, which is very important for a safe ascent. Once I am back down at one of our high camps, I am hoping to be able to ring my ‘robot’ Richard, who will hopefully update the site and let you know what is happening. Until then, keep your fingers crossed that my little dream of reaching an 8,000m peak without the use of supplementary oxygen will come true.