Skip to content (Press Enter)
HomeBlogManaslu 2011Back on Manaslu 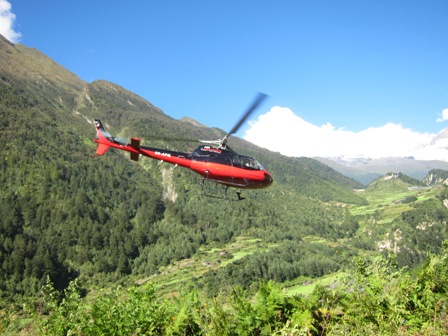 While the world has most probably been commemorating the 10th anniversary of 9/11, ordinary life seems so far away at Manaslu base camp. It has already been a week since I left Kathmandu and a lot has happened since then. I was actually supposed to walk to base camp, and the trek would have taken me about five days. I had actually been looking forward to it as it is a beautiful walk, however, I was also aware of the fact that I would arrive pretty late at base camp, which would have been difficult for my acclimatisation. On Saturday morning, Russell called me from base camp, telling me that one of our guides had to go back to Kathmandu for medical reasons and that I could catch a helicopter ride with him. Not a bad perspective, given that I would be there about a week earlier and the fact that I had done the trek last year, made the decision easier for me – I would be a little lazy and fly.

On Tuesday morning, Brian and I were taken to Manaslu base camp in about an hour – a journey that would have taken me about a week otherwise. The weather and the views were amazing and when we were dropped at 4,700m we got a great glimpse of the 8th highest mountain in the world. Of course, being dropped at such a high altitude without previous acclimatisation is not necessarily advisable as the body has not had the chance to create more red blood cells and adapt to the higher elevation. However, when we got there I was feeling fine and the fact that the team had gone for a walk to Camp I meant that I could just sit and relax without having to socialize and talk all the time.

It was good too see the team again when they came back down in the afternoon, and I immediately started to learn the names of our 24 members, who are part of the expedition this year. It is an interesting season as Himalayan Experience has 10 British soldiers on board, who were injured in the war in Iraq or Afghanistan. When I first heard about it, I was a little bit skeptical about having soldiers on the team, but seeing these young lads, who have an arm missing, lost their hearing or have been seriously burnt all over their bodies, is rather touching. And they are feeling very lucky to be here – and so do I, actually.

Since I arrived here, I have already spent three nights at Camp I at 5,570m and reached 6,100m during an acclimatisation hike on Sunday. The weather is a little bit weird this year as the temperatures never reached freezing at Camp I, which makes the mountain and the route-finding a little bit more difficult this year. “Seeing the seracs in this heat makes me a little bit nervous as they can fall down at any time,” our guide Adrian told me. However, our Sirdar Phurba Tashi, who has been Russell’s right hand for many years, is confident as they found a new route, which will be less exposed to avalanches or serac fall.

Like on every expedition, our Sherpa team has been working incredibly hard and they have already carried 15 tents and about 35 oxygen bottles to Camp II. “I am hoping to reach Camp III tomorrow, so we can start setting it up,” Phurba Tashi said. Equally, our kitchen team consisting of Lacchu, Lhakpa, Phuri and Kur Bahadur is working non-stop to feed a team of 32 hungry members, guides, bloggers and doctors as well as 23 Sherpas. “We start our job at 5am and finish at about 9pm when everyone has gone to bed,” Lacchu said with his usual smile.

The team has been down from Camp I for one day and we will have another rest day on Tuesday, before we head back up the mountain. Everyone will stay at Camp I for one night and at Camp II at 6,300m for three nights. My rotation will be a little bit different as I will be attempting to reach the summit without the use of supplementary oxygen. I will stay at Camp II for two nights and at Camp II at 6,800m for either one or two nights – depending on how I feel. As I am the only member in the group, who is climbing without supplementary oxygen, I will stay at Camp III with a Sherpa – but nobody else. The reason for the different rotation is that my body has to acclimatise better to the higher altitudes and spending more nights up high is essential to create the necessary blood cells. Climbing with or without supplementary oxygen is probably like climbing a different mountain and the fact that the blood thickens significantly with the lack of oxygen makes the extremities more prone to frostbite.

However, in the meantime I would like to thank everyone who is following my journeys up the various hills and giving me a lot of strength and support to achieve my goals. I would also like to thank my fantastic family for putting up with me and letting me go on these adventures. Especially my Mutti, who always worries when I am gone but is always supportive and very proud of me. I could not do all this without her support.