Warning: Declaration of wp_bootstrap_navwalker::start_lvl(&$output, $depth) should be compatible with Walker_Nav_Menu::start_lvl(&$output, $depth = 0, $args = NULL) in /home/customer/www/billibierling.com/public_html/wp-content/themes/billi-bootstrap/wp_bootstrap_navwalker.php on line 22
 Billi Bierling – Journalist and Climber | Ladakh – the land of high passes

Ladakh – the land of high passes

I just got back from the beautiful region of Ladakh in northern India, where I was leading a trek to Tso Moriri and Lungser Kangri, a 6,666m peak, which unfortunately we did not get to the top of due to bad weather. However, despite the disappointment of not standing on the summit, the trek and the area were beautiful as well as the people we met. 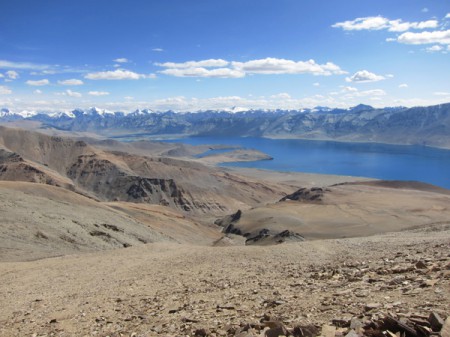 We started off in Ladakh’s largest city of Leh, which lies at an altitude of 3,500m and even though we were in India there is hardly any evidence that this state lies in the Hindu republic. The people here look Tibetan, most of them are Buddhist and they speak their own language, which is Ladakhi. The landscape was also more Tibetan than Indian – brown and barren but absolutely stunning.

It was a three-week trek and it was the most remote hike I had ever done as we did not see one other trekking group during the whole time. I had a great local crew, which was not really local as most of them were Nepali Sherpas, who spend the summer in Ladakh to work. “There is no trekking or climbing in Nepal in July and August and it is a good time for us to come here,” said Dorjee Sherpa, who I had worked with on Mera Peak many years ago. Our Sirdar (head Sherpa) Nima was from Darjeeling (yes, we all think about tea when we hear that name) in West Bengal in northeast India. “We all speak Nepali there and most of the people are of Nepali descent, like Sherpa Tenzing Norgay, who was the first person to climb Everest with Edmund Hillary in 1953,” Nima explained. 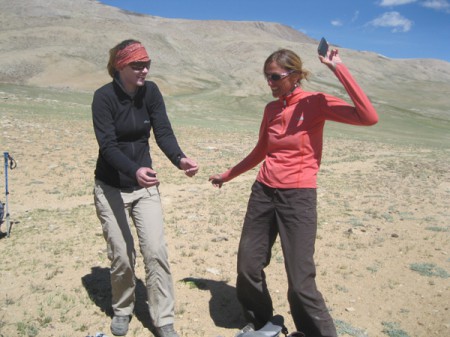 Angela from Ireland and I moving to the tunes of my iPod at 5,000m

We had a great crew, a fun group and – apart from our two summit days – fantastic weather. The terrain of the trek was pretty tame and we hardly ever had to navigate steep climbs. “It was quite difficult to get to base camp as there was no path and we had to walk over scree for hours on end,” said Rudi from Germany. But due to its remoteness we were also able to see quite a lot of wildlife like wild Asses, eagles and dozens of marmots eagerly looking for food in the desert. I was actually quite surprised to see so much greenery at altitudes of between 4,000m to 5,000m, which is different from what I know in Nepal. 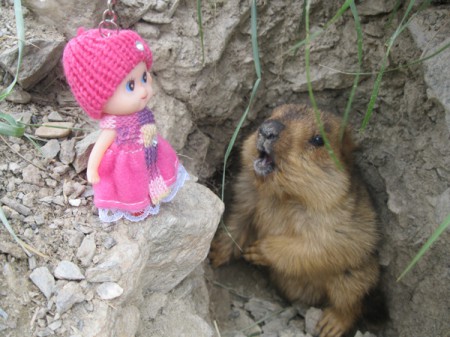 Great shot of a Marmot by Nima

Now I am back in Kathmandu trying to recover from all the climbing and trekking to get ready for my next mountain experience, which will be on Manaslu writing the newsletter for Himalayan Experience and hopefully climb the 8th highest peak in the world again, but this time without the use of supplementary oxygen. However, the main purpose is to work for Russell and with the climb –  let’s see how it goes.

And then of course, there is my work for Miss Hawley, who unfortunately fell and broke her hip about four weeks ago. I went to see her yesterday and she is doing incredibly well. “People say I am strong and I guess I am not ready to go yet,” she told me with a smile. She has actually started working again and I admire her for her commitment and her strength and I hope she will be able to do her amazing work for many more years to come!

Leave a Reply to Beth