Warning: Declaration of wp_bootstrap_navwalker::start_lvl(&$output, $depth) should be compatible with Walker_Nav_Menu::start_lvl(&$output, $depth = 0, $args = NULL) in /home/customer/www/billibierling.com/public_html/wp-content/themes/billi-bootstrap/wp_bootstrap_navwalker.php on line 22
 Billi Bierling – Journalist and Climber | The dramatic scenery of the Karakorum

The dramatic scenery of the Karakorum

This is just a quick update whilst in civilisation before I go off into the mountains again. I have just come back from trekking to Concordia and the K2 memorial site in Pakistan and even though I had rather climb mountains than just trek, this trip was simply amazing. The Karakorum is more dramatic and extreme than the Himalaya and even though the Khumbu region remains a stunning place, it does not match the beauty of the Karakorum. 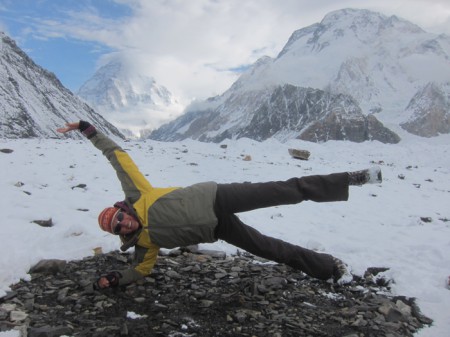 There is always time to plank - even at Concordia at 4,900m

I was leading a trip for KE Adventure, a British tour operator, and my group comprised of eight clients from the UK and the US, who (I think) all had a great time. “What I appreciated most about this trip was Billi’s enthusiasm for the mountains,” Dr Bill, who was part of the team, said during our farewell dinner in Rawalpindi on Friday. His words really touched me as it is good to know that I still have this enthusiasm for the mountains after all those years.

The trek took 15 days and we started from a small village called Askoli, which is about a six-hour-drive from Skardu in Baltistan. We were lucky to be able catch a plane to Skardu, as the flights frequently get cancelled due to bad weather in the region. Being used to the small Twin Otter or Dornier planes that fly to Lukla, I was surprised to see that a full-blown Boeing 737 goes to Skardu and nearly touching the summit of Nanga Parbat! 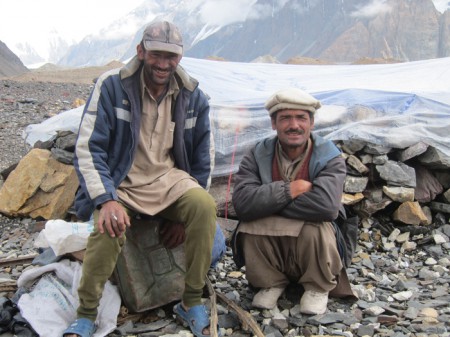 Two of our smiling porters

From Askoli the trek starts out very gently, however, the heat (up to about 40 Celsius) was excruciating and we were struggling to get to the first campsite. The approach march is on very rough terrain and even though the trek lacks steep hills it is certainly a challenge due to all the boulders the trekkers have to manage. “When I saw the daily altitude gain on the itinerary I thought this trek was easy, however, I think it was the hardest one I have ever done,” said the 75-year old Asit, who we all referred to as ‘Professor’.

After about eight days (four of which were exclusively spent on the Baltoro Glacier) we reached Concordia – the meeting point of several glaciers, which I had heard so much about. “Wow, this is something I’ve dreamed about for so many years,” said Mike from Maine. And it was like a dream to be there – even though the weather was not particularly friendly to us and the clouds would not reveal K2, the second highest mountain in the world, for the first 24 hours. “Some people spend a few days here and they never get to see K2,” Carlos Pauner, a Spanish mountaineer who I met on the walk-in, told me. But the Gods were kind to us and the following morning, while we were getting ready to tackle the 12-hour return hike to K2 base camp, the mountain was completely clear. 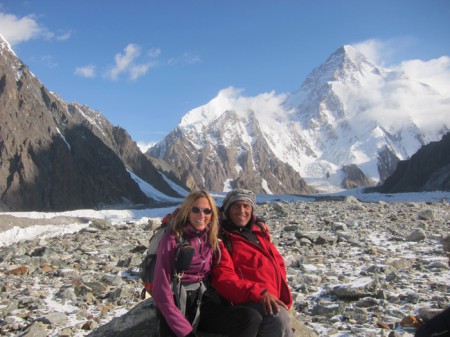 Our great Sirdar Karim and I with K2 in the background

However, it is not only K2 that dominates the Karakorum – it is also the granite blocks like the Trango Towers, Muztagh Towers, the Cathedral or historic mountains like Chogolisa, where Hermann Buhl lost his life after having become the first person to reach Broad Peak together with Kurt Diemberger in 1957. “I have read so much about these mountains but standing here and looking at them is completely different and I feel in a very historic place,” said Dr Bill.

We decided to forego K2 base camp and visit the memorial site instead as it is located near BC and was probably a lot more interesting. And so it was. But without our local guide Karim, we would not have stood a chance to find the place, which is tucked up high up on a rocky ledge at the end of the valley. I guess there are about 50 plaques, which are partly properly done like the British female climber Alison Hargreaves’, or are just plates with names engraved, most probably with a nail or a stencil. While we were climbing around the plaques checking out who received the honour I noticed a lot of boots around the site. “These are probably the boots of the mountaineers who died,” observed Bill – a statement that sent a shiver down my spine. Since the early expeditions in 1939, 80 people have lost their lives on K2 and it was only in 1954 that two Italians, Lino Lacedelli and Achille Compagnoni, made the first ascent on the mountain’s Abruzzi ridge. Since then, 302 people have reached the summit of the 8,611m-high mountain, 31 of which died on the descent. 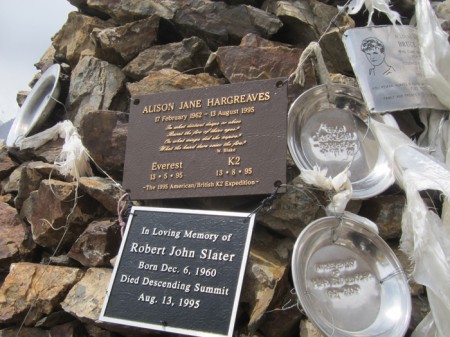 Some of the numerous plaques at the K2 memorial site

On our way back to Concordia I bumped into a few mountaineers I know from Nepal and it was great to see them climbing in the Karakorum. “Billi, what’s your next mountain,” Xavi Arias from Spain asked me while we were having a cup of tea at his base camp on Broad Peak, the 12th highest mountain in the world.

Well, it is certainly not K2 as the memorial site made me realise that a lot of good and professional mountaineers had to leave their lives on that mountain. However, as Broad Peak was domineering the scenery from very early on in the trek and I was able to have a good look at the route, which seems relatively straightforward, I think that this might be a mountain I would climb in the Karakorum. “Broad Peak is not that technically difficult and it has little avalanche danger,” Carlos explained to me. “But you can have very bad weather. In 2006, we were stuck in our tents at base camp for 22 days.” 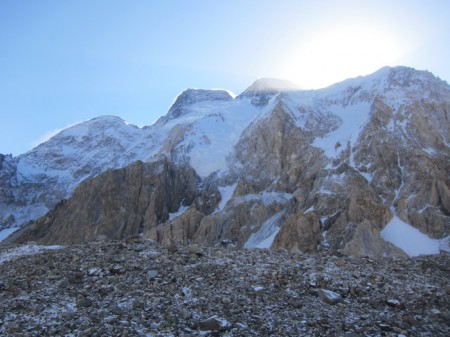 Broad Peak, the 12th highest mountain in the world, in the morning sun

I guess we were lucky that the Weather Gods allowed us to see the full beauty of the Karakorum and even though I was sad to leave, I am sure I will be back to climb next year.

However, for now I am off to Lhadak in northern India to climb the 6,666m-high Lungser Kangri with 12 clients from Britain, France and Germany.

I hope Europe and the rest of the northern hemisphere is enjoying a good summer and that the population of my home village Garmisch-Partenkirchen is not too upset that the Olympic Winter Games 2018 are not being held in the Bavarian resort but in South Korea.