Warning: Declaration of wp_bootstrap_navwalker::start_lvl(&$output, $depth) should be compatible with Walker_Nav_Menu::start_lvl(&$output, $depth = 0, $args = NULL) in /home/customer/www/billibierling.com/public_html/wp-content/themes/billi-bootstrap/wp_bootstrap_navwalker.php on line 22
 Billi Bierling – Journalist and Climber | Going down before going up again

Going down before going up again

It is the 5th of May and while many teams are going down to the lower elevations to recover from having lived above 5,000m and prepare for their summit attempt, the Himalayan Experience Lhotse group is heading down the valley in order to climb Lobuche East for acclimatisation. 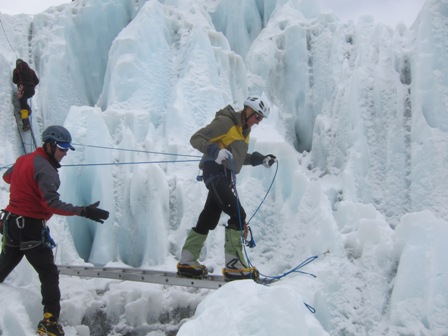 Practicing walking across the ladders

It seems late in the season to start acclimatising as most of the Everest climbers have finished their two or three rotations on the mountain already, however, Russell is convinced that Lhotse is usually climbed later in the season and that’s why we are lagging behind a bit.

I have been at base camp for just over two weeks now and even though there is always something to do like visiting other camps or writing the newsletter for our expedition, it is about time to start climbing.

On Wednesday, our group did a little training course for abseiling, arm rapping and ladder crossing and even though I have done this many times before, it was great to have a refresher course as sometimes you forgot how to do things – or, in my case, get too overconfident! When I reached the practice ladder, I thought to myself: “Hah, I have crossed many ladders in the icefall before so that is a piece of cake,’ and started running across until I got stuck with my crampons between the rungs. Fortunately I was at the edge of the ladder and Narly, one of our guides, caught me and prevented me from falling off and maybe hurting myself! 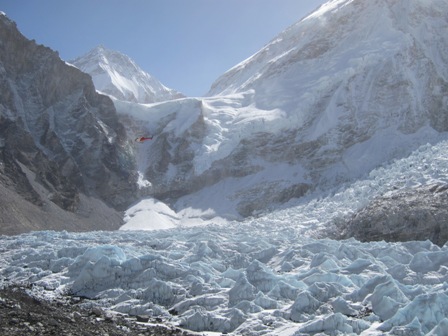 We will be on Lobuche East for about six days, during which time we will be staying two nights on the summit of the 6,119m peak to acclimatise. The team will be back at Everest base camp on 11 May and then we will probably rest for a couple of days before we head through the icefall for our second acclimatisation rotation that will take us all the way up to Camp III.

I am feeling a bit apprehensive about the route this year and I guess it is because I have been there before and I know what to expect. However, according to Woody, one of our Everest guides, the Lhotse face is a lot less daunting this season as it has more snow on it than a couple of years ago.

I will be missing my climbing mate Ellen, who is heading up to Camp II with Russell in the next couple of days and will then leave to go back to the States. She has been a wonderful help and mentor for me in the mountains and I shall really miss her support and her company. “I wish we were heading up together,” Ellen said when she visited me in my tent today.

It may sound pathetic but being here among the Himalayan Experience guides, who I now know so well, Monica, the doctor, who has become a very good friend, Ellen and Russell, who I feel very close to and of course some of the members, who I either met on Manaslu or on Everest two years ago, is like being in the midst of a big family. Of course, it does not replace my own great family back home, however, the fact that I am allowed to wake up in the middle of the beauty of these mountains every morning makes me one of the happiest people in the world.

I will try and update you from the top of Lobuche East in the next couple of days – up until then ‘onwards and upwards’!