Silence has arrived at our base camp

This is just a quick update on what has been happening here at Everest base camp. Our Everest group has gone off to Camp II and Camp III for the next six days, and the Himalayan Experience camp is very quiet with only Monica, Ellen, Russell, a team of Sherpas and I left. I am currently sitting in the White Pod with the girls gossiping and it feels very calm and quiet. The weather has improved and the biting wind has abated. “It is finally proper Everest weather and we can sit out and sunbathe,” Monica said. However, the weather gods are predicting snow for the next few days, which should be good for the conditions on the Lhotse Face. 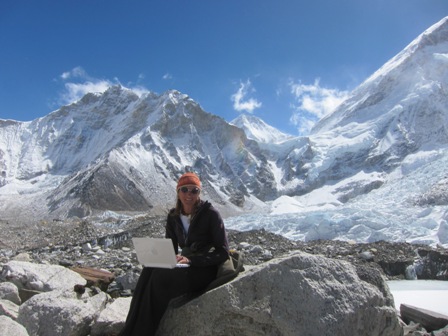 Finding an internet connection on the Everest Base Camp Trail

After having done some laundry this morning, Ellen and I went down to Gorak Shep to use the so-called ‘Dongle’, which is the Internet stick that is working very well in the village below base camp; however, it also works in the middle of the Everest base camp trail, where I sometimes sit to send and receive my emails or serve the Internet. For the trekkers, who are arriving at their final destination, seeing me and some other Everest climbers with their laptops is a bit of a disappointment though. “Hey, can you get out of my picture as this is a bit of an anti-climax,” a trekker reprimanded me the other day. “Fair enough,” I said, “but welcome to the reality of Everest base camp.”

Other than writing the newsletter for Himalayan Experience and visiting other teams at base camp, it has been fairly quiet here at 5,350m. When I went visiting other teams yesterday, I bumped into Ang Nima, who is one of the oldest Icefall Doctors – the Sherpa team who prepares the Khumbu Icefall for the climbers every single year. The team of eight Sherpas usually arrives at Everest Base Camp in mid-March to pave the way for the climbers up to Camp I. He told me that the maze of icebergs and pinnacles was in very good condition this season. “We only had to fix 29 ladders, which is nothing compared to last year,” he told me.

However, it will be at least another two weeks until I will set foot into the icefall as the rest of my team has still not arrived at base camp. They have taken their time, which is good for proper acclimatisation, and they are currently at Lobuche base camp. They will arrive here on 30 April and probably stay for two nights before we go back down to start with our acclimatisation programme on the 6,110m high Lobuche East.

Until then I shall enjoy the high altitude lethargy, which is amazing considering how active I normally am. Every little activity seems so much of an effort at 5,350m, however, the good thing is that my body is creating lots of red blood cells while I am sitting around gossiping in the White Pod.