I have just come back to Islamabad after having spent a week in Kathmandu, where I was busy meeting mountaineering expeditions for Miss Hawley and starting writing the Newsletter for Himalayan Experience, who I will be climbing Lhotse with. It was good to be back and it was exciting to see all the usual suspects returning to the mountain this year, which is Nepal’s official ‘Tourism Year 2011’. 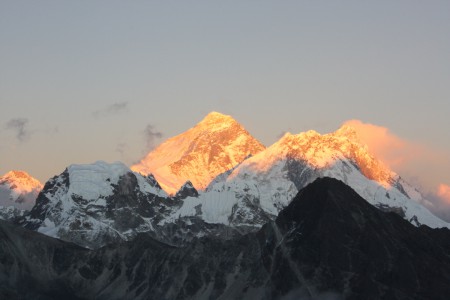 However, what I thought was fairly interesting was that even though Nepal has been advertising for its tourism year for the past 12 months, the country has done very little to come up with the goods. Arriving at Tribhuvan International Airport was more chaotic than ever. Most people were desperately waiting for their bags to show up on the conveyor belt until they (including myself) noticed that most of the luggage was in a big pile in the middle of the arrival hall. It took me about half an hour to detect my little rucksack, which was right on the bottom of the huge bag mountain. Once you get out of the airport (which is currently undergoing major construction work) it is business as usual and you have to fight your way through the crowds to find a taxi. But nevertheless – it is always good to come back home and even though living with up to 16 hours of power cuts a day can be annoying, Nepal and its chaos has retained its charm – at least for me.

It was good to see Thamel, the tourist district, teeming with tourists, trekkers and mountaineers and I had a hard time to bike through the streets of Kathmandu without stopping every five minutes to have a chat with an old friend. Russell Brice’s Everest group arrived on 30th March and it was good to see the guides Adrian, Woody, Shinji and of course Monica, the doctor, again. It has become a bit of a family for me and I feel very happy that I get to spend more time with them on the mountain and that I am part of the team. Most of the Everest climbers already knew each other, as we have four clients who were on Manaslu last year, two clients who attempted Everest in 2009 and of course David Tait, who has already climbed Everest three times. This year he is trying to scale the roof of the world without supplementary oxygen, which is something only 132 people have done so far. If you are interested in my updates for Himalayan Experience, you can click here. 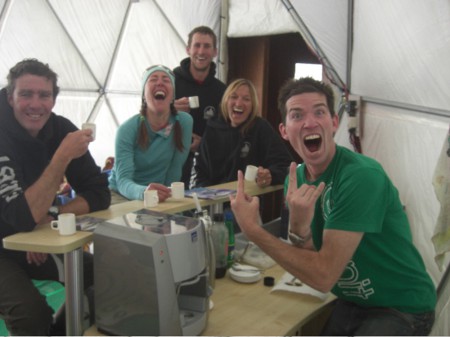 Last year's team inside the White Pod at Everest base camp

After having got a good taste of this year’s climbing season, I had to return to Islamabad for another ten days to finish my contract with the United Nations before I pack up my things and leave Pakistan for good. I will be sad to go after 18 months, but I am also very excited about my upcoming expedition to Lhotse. I feel mentally and physically well prepared for the fourth highest mountain in the world but I am also very excited to go back to the Khumbu Region – my most favourite trekking route in the world. I will arrive in Kathmandu on 14 April and I will spend four days working for Miss Hawley before I fly to Lukla on 18 April. I will then make my way up to base camp and I am hoping to arrive there around 23 April. The rest of the six Lhotse members are due to arrive at the end of the month and the reason I am going a little bit earlier is that I just love ambling up the Khumbu on my own – without a porter or a guide – just my rucksack and I!

But until then, I will be here in Islamabad, taking my friends for walks in the hills, teaching CORE and of course doing my work for the United Nations. I shall make the most of my last ten days before I dive into a completely different world again.