Warning: Declaration of wp_bootstrap_navwalker::start_lvl(&$output, $depth) should be compatible with Walker_Nav_Menu::start_lvl(&$output, $depth = 0, $args = NULL) in /home/customer/www/billibierling.com/public_html/wp-content/themes/billi-bootstrap/wp_bootstrap_navwalker.php on line 22
 Billi Bierling – Journalist and Climber | World Records, Fun Runs and a Delhi Belly

Last weekend was another weekend filled with sporting activities and first of all I would like to share with you that my good friend and Ironman World Champion, Chrissie Wellington, has yet broken another world record. Chrissie stunned the sports world again by finishing the 2.4-mile swim, 112-mile bike ride and the 26.2-mile run in 8:36:26, which took almost 33 minutes off the previous world record on that course. Even though we seem to have become blasé about Chrissie’s achievements, the race in Tempe, Arizona was very special for her, as her partner Tom came third overall, finishing in an amazing 8.11.44. He was one in only seven men who beat Chrissie, who was quoted as saying the following after the race: “I’m more than happy to do the washing up and the cooking for the next year because he beat me. There’s nothing I like more than to share this moment with my boyfriend. For me, he’s won the race today.” 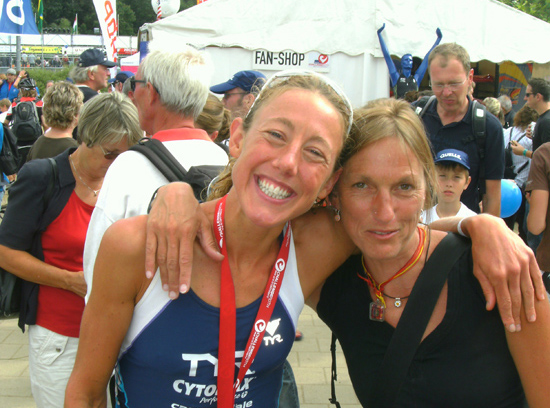 Chrissie and I after the Ironman race in Roth last year

There was another great sporting event this weekend, which a couple of friends and I joined – the ‘legendary’ half marathon in India’s capital, Delhi. Well, it may not be an Ironman race but it was still fun and Ale and I decided on the spur of the moment to join Richard, another runner here in Islamabad, to do the race. As travelling to India is almost impossible without complications and heaps of bureaucracy, we had to obtain the obligatory visa, which is not so easy when you need it in three days. However, with a lot driving and biking back and forth to the Indian embassy, we managed to get our entry ticket to India, and after having exchanged countless emails regarding hotel, flight and train bookings we were ready to hit the road.

The only crucial thing Ale and I did not have was our entry to the half marathon. With the lack of my German and Ale’s Swiss efficiency we did not manage to sign up in time and even though I thought it would not be a problem, I had forgotten about Indian bureaucracy. But my journalistic instinct helped us and I contacted the organisers begging them to let us race as we wanted to cover the event for a German magazine – and miraculously, it worked.

On Thursday morning, Manuel, Ale, Richard and I set off from Islamabad armed with visas, half marathon entries and several plane and train tickets as we had decided to go overland and cross the only land border between India and Pakistan. It was a very interesting experience and those of us who think that red tape is a big problem in the developed world are certainly wrong. After having been stamped numerous times and having filled in countless forms, which even required the names of our grandfathers, we were allowed to enter India, which compared to Pakistan seemed a lot more colourful and alive. 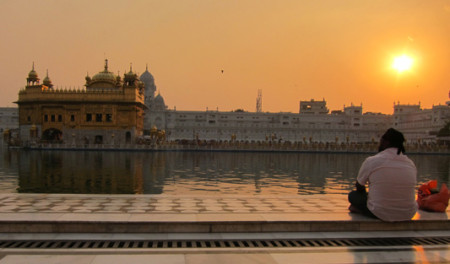 We started our first day in Amritsar, where we spent most of our time at the ‘Golden Temple’, which is the holiest shrine in Shikhism. The setting was amazing and as we arrived there just in time for sunset we were able to witness the breathtaking reflection of  the sunlight in the shining gold of the temple as well as in the surrounding lake.

The next day was filled with an eight-hour train journey to Delhi, which in itself was an interesting experience. Thankfully, Richard had been organised enough to book tickets as my normal travel philosophy of just pitching up somewhere and getting it on the spot would not have got us on the train to Delhi.

Shortly after we had settled down in our little compartment, a little old Indian lady, who we later referred to as ‘Oma’ (the German word for grandma), walked in and showed us very quickly who was wearing the trousers in this part of the train. She shushed Manuel away from his designated seat, unpacked her blanket, pillow, and lunch box and settled in nicely while we were forced to huddle together on a smaller spot, from where we listened to Oma’s gentle but content snoring. Every once in a while Manuel tried to shut her up by whistling into her ear, but the gentle rocking of the train won in the end and Oma carried on snoring to her heart’s content.

The distance between Delhi and Amritsar is about 500km and we were surprised to see how flat it was – despite being beautiful there was not a hump in sight. We drove through kilometres of flatness spiked with rice and wheat fields and the odd city accommodating some of the 1.17 billion people residing in this vast country.

Once we arrived in Delhi we were fighting our way through to the marathon centre, where we picked up our bibs and goodie bags, which were filled with random items, like hair removal wax, hair gel, Masala spices, insect repellent etc – but I guess one has to look the part in an Indian race. Ale and I were also a bit surprised when we had a closer look at our bibs and found the word ‘Veteran’ written in big letters across it! “Does this mean we are old”, Ale wondered. Thankfully it was conveniently placed on the bottom of the number, so we were able to hide this ageist statement by folding it over and pinning it tightly to our shirts.

Race day was yet another early start and I picked up Ale and Manuel at the crack of dawn to catch one of the many buses that were shuttling across the city to get the thousands of people to the start of the race. Unfortunately, Manuel could not join us as he was haunted by a ‘Delhi Belly’ (a phrase coined by my friend Chrissie) and instead of facing the running crowds, he opted to stay in bed and tend to his stomach.

When we arrived at the entrance gate, we probably found one of the the biggest displays of British influence in India as the race participants were patiently queuing up to get onto the sports grounds. Nobody was pushing and everyone waited for their turn. After about half an hour we finally managed to squeeze our cold and stiff bodies through the gate and immediately headed for the start line. The only problem was that nobody knew where it was. The first official-looking person sent us to a gate which was populated by hundreds of senior citizens waiting to embark on their three-kilometre walk, however, we were convinced that this could not be meant for us as we had hidden the word ‘Veteran’ on our bibs very well. Following another few wrong directions, Ale and I just listened to our gut feelings and ran towards what we thought looked like the start.

By that time we were already 15 minutes late, however, we were not the only confused runners as a young Indian man jogged next to us crying out: “I think we are somewhat late!” And somewhat late we were! When we finally crossed the start line there was nobody else around, which was rather strange considering that around 8,900 people took part in the half marathon. “Let’s push on and catch up with the crowd,” Ale shouted enthusiastically.

Once we were inside the pack it finally felt like a proper race and with our iPods on, the two of us were cruising. As the 21km course was a round trip, we were able to see the first runners approaching the finishing line and it was beautiful to watch the Kenyans and Ethiopians pacing down the road in an amazing stride. I felt goose bumps creeping all over my body as their running styles were so beautiful. After about six kilometres into the race we saw our friend Richard, who was right behind these quick Africans and eventually finished the race in an amazing 1.13.42 minutes, which was only 14.4 minutes behind Geoffrey Mutai from Kenya, who won the race in 58.38 minutes.

With Ale being a bit quicker than I, she left our cosy coupled run after about 10km and pushed away to eventually leave me trailing behind. “I did not even see the Indian Gate or the Palace”, Ale said when I asked her what she thought of the stunning monuments and buildings that seamed the green roads of New Delhi. “I just put my head down and ran,” she commented and it was certainly worth it as she finished the race in 1.54.00, which turned out to be her best half marathon time!

My finishing time was 1.58.45, which I am very pleased about as I wanted to run the 21km under two hours. So, in our celebratory mood we went to the luggage deposit, where Ale had left her bag before the race. After a few frustrated attempts to attract the attention of one of the staff, Ale took initiative and jumped over the counter to find her own bag, which proved a very difficult undertaking as most of the hundreds of depostied bags were identical and not in any numeric order. Initially, the bag people were not pleased to find Ale on the wrong side of the counter, but when she refused to leave stamping her feet, she was finally allowed to look for her own bag. After digging through the hundreds of red race bags, Ale re-emerged with her little sack in her hand and a huge smile on her face. 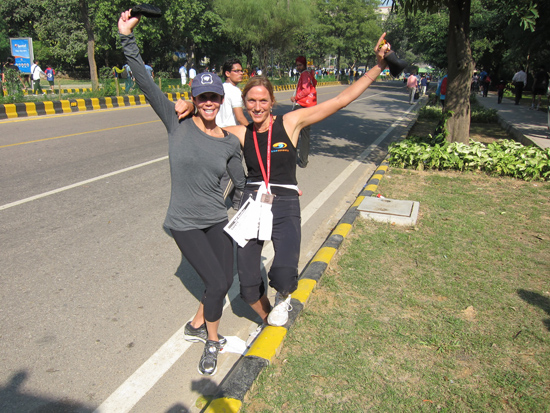 On our way back we were on a very tight schedule as we had a flight to catch on the other side of the border, however, we were faced with several obstacles, such as an airline that nearly did not want to let us check-in as we were a few minutes late for the flight; with a plane of that very same airline that was delayed by almost one hour; with slow and meticulous border guards, who took ages to stamp a passport and, in their enthusiasm, forgot to stamp Manuel’s; with a livid Manuel, who was cursing at the border guards while walking across no-man’s land back to India to get his stamp: and with a taxi that was literally falling apart in its race to get us to the airport in Lahore in time.

However, it all worked out in the end and despite the ancient car that did not look very trustworthy, the slick and funny driver managed to get us to the airport in Lahore on time to catch our flight back to Islamabad – and we even had time on the plane to reflect on our fun and activity-packed weekend in India.