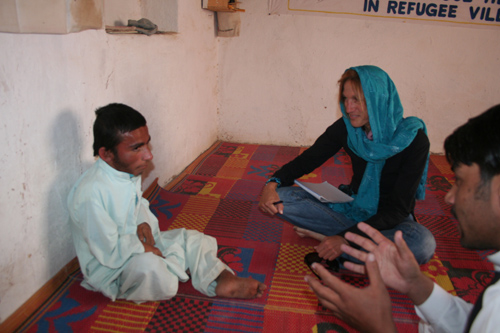 My work in Pakistan has taken me to Quetta in Balochistan, which is in the south west of the country and is very close to the borders with Afghanistan and Iran. I came here more than one week ago and even though the city is surrounded by beautiful looking mountains, I am not allowed to go there. Due to the security situation here, our movement is very restricted and the only walk we are allowed to go on is the 60metres from our guesthouse to the office and back (which is the highlight of my day).

Fortunately we have an antiquated treadmill in the dark basement (which I call the dungeon) and I have my CORE to keep me sane – and I have infected some of my great colleagues with exercise and we are now trying to do one hour of CORE every evening, which is real fun.

Despite the confinement, I have had some amazing encounters with some very special people. One of them was Mohammad Zai Pareshan, who lives in an Afghan refugee village near Pishin in Balochistan. When I met this 21-year-old boy, who is suffering from severe polio, I immediately felt his zest for life and his ambition to learn and study. “I need an operation so I can get out of this body and become an engineer,” he told me upon my arrival. Unfortunately, I could not give him an operation but the UNHCR team provided him with a brandnew wheelchair, which will certainly make crossing the rocky plains from his house to the school a lot easier. “One of my classmates pushes me to school every day and sometimes we take half an hour for the route, which is less than one kilometre,” he said. 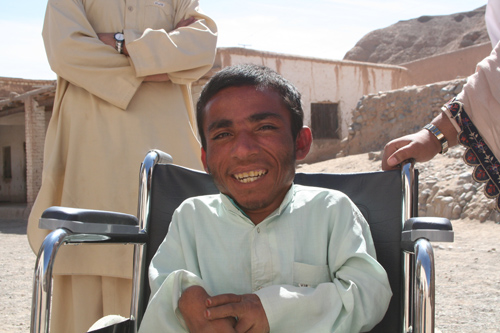 Mohammad greeted us with a big smile (photo: Faryal Ahmed)

We immediately hit it off and were laughing together as if we had known each other for a while. “I’m really impressed of your closeness and compassion to such needy people,” one of my colleagues, Mohammad Ali (NOT the boxer), said to me during our visit.

Mohammad Pareshan, whose parents fled to Pakistan from Herat in Afghanistan more than thirty years ago, was born in the Surkhab refugee village. At the age of eight he developed polio, which changed his life significantly.

“It was very difficult for us when he fell sick as his personality changed. He was such an energetic and bright boy but when he got polio, he would not want to leave the house anymore,” Mohammad’s 75-year-old father told me.

I express my sadness through my pen

“It was a very sad time for me as I was very jealous of my friends, who were able to get an education, and I wasn’t,” the very bright and witty man remembered. “During that time I started writing poetry and I guess I expressed my sadness through my pen.”

Pareshan is actually Mohammad’s poet’s name and he is hoping that one day he will become as famous as his idol Rahman Baba, an Afghan poet who lived in Peshawar in Pakistan in the 17th century.  “My problem is that writing with a pen is very difficult for me, so I think I’ll need a computer,” he said in a tongue-and-cheek tone of voice. My answer to that was that I shall add the computer to his ‘shopping list’ as he had voiced quite a few ‘demands’ during our conversation. I will try to find a second hand laptop computer for him as I think it would really improve his life.

I spent about two hours with Mohammad interviewing him and talking about his life. As his English was very poor and my Pashtoo is non-existent, we used a translator, who also contributed to our fun. After we had finished the interview, Pashain invited us to his house to meet his father and his brothers. Unfortunately, we were not able to meet the female members of the family as this is not the norm in this society. 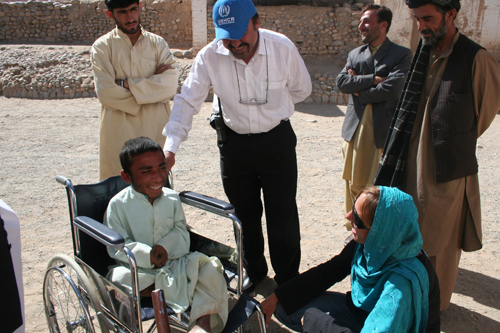 The family of eight lives in a tiny mudhouse in the Surkhab refugee village among 39,000 other refugees, who are mainly 2nd generation Afghans and have made Pakistan their home.

Even though Mohammad has never been to his country of origin, he is longing to go back to his roots. “My parents are still missing their home and they have told me many story about the beauty of Afghanistan. But as long as the situation is so unstable there, we will not go back.”

I was having such a good time at the village that my colleague had to drag me away as it was getting late and we are not allowed to move around in the dark in certain areas in Balochistan. When I left I almost felt inclined to give Mohammad a hug but, of course, this would have been inappropriate given the society we are living in.

On my way back in the car I felt happy that I had the opportunity to meet such an inspiring person, who despite his demise had an infectious laugh and a great sense of humour. And I hoped that I had inspired him a little bit as well.

That hope came true in the evening when I received the following email from Mirwise Jalil, our translator: “Hi Billi, I still remember your nice shake-hand. I was inspired of having a wonderful day with a journalist as I’m also affiliated with an English daily. I hope you have enjoyed the day;s activities. The special child whom you interviewed was also inspired and visited me in the evening, while I was leaving for Quetta, and is sending bundle of regards for you which I’m sure you will accept.”