Warning: Declaration of wp_bootstrap_navwalker::start_lvl(&$output, $depth) should be compatible with Walker_Nav_Menu::start_lvl(&$output, $depth = 0, $args = NULL) in /home/customer/www/billibierling.com/public_html/wp-content/themes/billi-bootstrap/wp_bootstrap_navwalker.php on line 22
 Billi Bierling – Journalist and Climber | Life after Manaslu 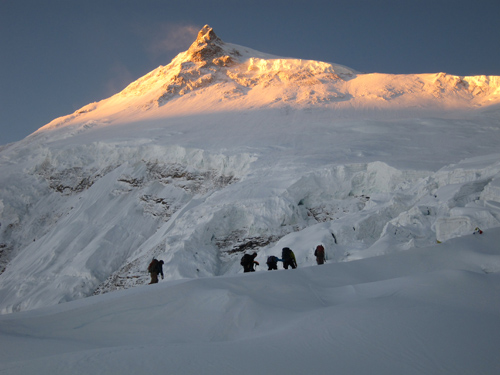 Life after Manaslu has been reasonably hectic with barely three days gap between the summit and getting back to Kathmandu. Russell managed to organise a couple of helicopters that took us straight from Samagoan (the last village before base camp) o to Kathmandu, where I immediately got on my bike to find expeditions for Miss Hawley. However, my time in the Nepalese capital was very short as I had to fly back to Islamabad four days later to immerse myself back into the development world.

Coming back to Pakistan was a bit of a culture shock as I had just been in the mountains for six weeks focusing on the summit and not being connected to the outside world at all. And here I was – back in Islamabad at the Belgian bar with dozens of new faces that had been deployed to Pakistan trying to safe the country from its misery, namely the floods. I just felt like a ‘fish out of water’ – and believe me, there is no pun intended.

Even though the floods in Pakistan have been out of the international news for some time, the emergency is far from over. There are still more than one million people displaced from their homes and many of those who were able to go back, found their houses completely destroyed. It will take years for the country to recover from this disaster and the humanitarian community is still working in emergency mode.

A race in Istanbul

However, after having spent a week at work trying to find my feet it was time to go off on a little adventure again. My good friend Ale had organised her birthday weekend in Istanbul, including a 15km run through the city on Sunday. It was probably a mad idea to fly to Istanbul for the weekend as my Italian friend Virginia and I had actually spent more time on the plane than in Istanbul – however, it was well worth it.

Istanbul is a very colourful and interesting city and now I know what they mean when they say ‘where East meets West’. After having lived in Pakistan for more than one year and mostly seeing men in pyjamas and women all covered up, it was good to see women in tight mini dresses standing next to women wearing a ‘Burka’. “I am so glad to be out of ‘Pyjamabad’”, Virginia called out when we were driving through the city. And I could only agree – it was refreshing to see people in ‘western’ clothes, drinking Café Lattes in the street without staring at you.

It was a great weekend, with lots of catching up, good food and wine, dancing and of course running as Ale, Manuel, Eron and I were taking part in the 15km race on Sunday. I was not quite sure whether I would be able to finish 15km after having been on top of an 8,000m peak only two weeks previously but I managed, which made me very happy. Not in the best time (1.25.04) though but I was surprised that I was able to run the whole course with my ridiculously weak legs. However, I am still suffering from the consequences as my body is still sore from the run.

Manuel, who had sprained his ankle during a training run in Switzerland, also somehow managed to run the race and finished it in an amazing time of 1.38.10 despite hobbling most of the way. 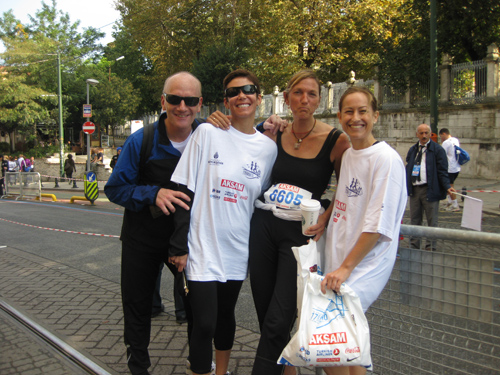 ...and after the race with Mano (photo: a tourist)

When I got back to work on Monday morning I found an email in my inbox asking me whether I wanted to go to Quetta to help the reporting unit there for two or three weeks. For everyone who does not know where Quetta is (I did not know it before I came to this country) – it is the capital of Balochistan and is right at the border with Afghanistan. It is supposed to be the most beautiful town in Pakistan and it is also called the country’s ‘Fruit Garden”. However, I think the most painful thing is that it is situated in a mountainous desert area and I will not be allowed to explore the hills there, due to security. Apparently UN staff can only go from the guesthouse to the office and back and even though there are these beautiful hills beckoning in the distance, we are not allowed to go hiking there.

So, I will be reporting from Quetta for a couple of weeks before I go to Italy for a weekend to take part in a discussion round about “women and mountains’ at the International Mountain Summit in Bressanone in South Tyrol on 6th November. I am hoping to send you a few updates from my time in Quetta, which should certainly be interesting.