Well, I thought the waiting game on Mount Everest was a huge challenge, but little did I know what climbing Manaslu in the  post-monsoon season entailed. Here, we are not only waiting for the winds to drop on the summit while we are basking in the sunshine. Here, we are mainly bound to our tents waiting for the rain to stop, waiting for the clouds to lift and waiting to see a tiny bit of a blue sky.

We were supposed to go up to Camp I today and then advance to Camp II tomorrow but the weather just does not allow it. “The Sherpas have just arrived at our Camp I and the snow is knee-deep and the avalanche danger is too high,” Russell has just told me. “The small tents are ok but the big Sherpa tent has collapsed and the Sherpas have to retrieve the sleeping bags and downsuits that were stored in there.” I hope they will be able to recover everything as a lot of equipment has been lost on this mountain in previous years.

I had heard a lot about the bad weather on Manaslu but I guess I was not prepared for this much rain. However, the great thing is that our team is still in good spirits and we are all taking it with a pinch of salt and trying to make the most of the time we are having to ourselves.

As I am writing this I am looking out of my tent and I can just make out the Spanish team, which is about 20 metres away – that is how thick the fog is. There are about 15 expeditions camped here at 4,700m and most of them are doing the same as our team – waiting for the precipitation to stop.

Sometimes we can feel the sun peeping through the clouds but most of the times the rain wins and continues relentlessly. The delay in the start of our second acclimatisation phase could challenge my oxygen-less ascent as there might not be enough time for me to spend an extra night at Camp III, which I would need. However, climbing Manaslu ‘pure’ means quite a lot to me as the mountain has traditionally been climbed without the use of supplementary oxygen before commercial expeditions arrived. “There is still a chance but I personally would not attempt it without having spent a night at Camp III,” said Adrian, who is one of our strongest guides. I guess I will have to wait and see how it goes as I do not want to put anybody else or myself into any danger.

Other than that there has been some interesting activity in our camp. On Friday morning Russell motivated the Sherpas, members and guides to build a cricket pitch to put the newly acquired cricket set to use. Adam, who used to be a professional cricket player for New Zealand, took the lead and within half an hour the team managed to flatten a sizeable part of our camp and those, who know anything about cricket, started hitting the ball. “I was gasping for breath but other than that it was like playing in England in May,” our cricket star Adam said.

Rene from the Netherlands and I were standing in our dry mess tent trying to understand the rules of the game but I guess for a German or a Dutch person, this sport will always remain double-Dutch.

Going for a walk

If the weather permits I will try and go for a walk this afternoon as just sitting in my tent – even though it is very cozy – or the mess tent is a huge challenge for me as I am used to lots of activity in my everyday life. “Maybe we can do some CORE exercise on the cricket pitch if it does not rain this afternoon,” Monica proposed – and yes that would be a great idea but at the moment it is chucking it down and I cannot imagine anyone getting their sleeping mats out and lifting their legs and bottoms to my CORE tunes.

But despite the bad weather it is great to be here as expedition life is always special and you get to know people you would normally not meet. “I find it a very bonding experience and even though we are not wading through the deep snow together, we have to get through it mentally together,” said Ellen while she was packing her rucksack still in the hope that we were going up today.

And it has been fun. There were lots of songs with Matt’s beautiful guitar playing, jokes and bets across the dinner table and losing a bet always involves eating a couple of the heinous Chinese salted plums, which I had to down the other day as I had lost a bet about the year ‘Losing my religion’ by R.E.M. was written (see picture). 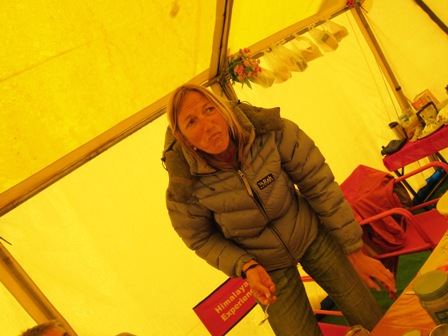 Anyway, I will keep you posted on the process and if there is no update on this website, check out the Himex website on www.himex.com.

Seventeen hours in a tent

The power of pictures