Seventeen hours in a tent

I am currently sitting in my cozy tent at base camp listening to the rain pelting on the roof and wondering whether the sun will ever come out to dry our clothes, which are still soaking wet from the last two days’ outing. We ventured up to Camp I on Monday and we did so in the pouring rain, however, the ascent seemed much easier than the first time which is probably due to better acclimatisation.

The team is fantastic – I guess one of the strongest and funniest teams I have ever seen on a mountain and even though the climbing is hard work it is also fun. We made it to Camp I in about 3 ½ hours and spent the rest of the afternoon in our tents brewing drinks and trying to eat, even though it was hard to down the ‘boil-in-the-bag’ meals at this altitude.

The following day we climbed towards Camp II and even though Woody, one of our guides, said that we were only going for a ‘short walk’ it was pretty hard to get to 6,000m. “I think this is a tougher start than on Mount Everest,” said Ellen, who has climbed the highest peak in the world twice. And I could not agree more – it is a tough start and the slopes we had to climb up were very steep and the steps that had been cut by the hard-working Sherpas were very big, which took a lot of our energy.

When we got to about 6,000m we called it a day as Adrian and the Sherpas were still fixing the ropes to the higher camp and we would have just been in their way. We got back to Camp I at about 2pm and literally stayed there until we left for base camp the next morning at 7.30am. I don’t think I could stay in one tiny space anywhere else in the world, however, it is possible in the mountains and that’s why I love being here. Everything that seems impossible in ‘normal’ life is possible in the mountains and the fact that I have not been on the internet for over three weeks does not bother me at all. I feel very detached from what is happening outside our little world here and it is refreshing. 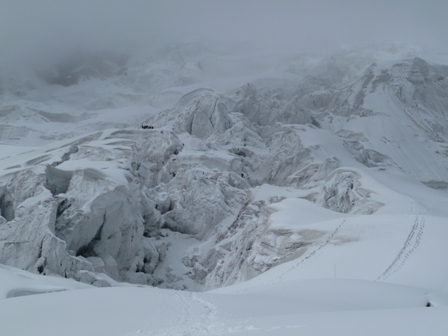 Regrouping after crossing the icefall

“I normally deal with about 100 emails per day and I always think I am irreplaceable but my company seems to be ticking on very well without me,” said Aaron, who runs a concrete cutting company in Utah in the United States. And I guess it is the same for all of us – just getting away from every day life, from all the stresses we have every day, the worries, the niggles and the issues we deal with on a daily basis are irrelevant. The most important thing we deal with here is how we get to the next camp and how we get enough food and liquid down to manage another day of climbing. “It is so therapeutic,” said Ellen, who is always constantly in touch with the rest of the world.

Expedition life is also very therapeutic for me as I have to start the day without running or doing any sort of exercise unless we climb – and that certainly does not happen every day. We will probably be off again on Friday morning to go to Camp I and spend one night there and then, weather-permitting, carry on to Camp II for two nights. If I am feeling well at Camp II, I will probably stay one night at Camp III at about 7,000m whereas everyone else will only ‘tag’ the camp, which means they will climb up for the day and return to Camp II to spend the night there. ‘Climb high – sleep low’ – this is the motto for high altitude mountaineering, however, as I am trying to attempt Manaslu without the use of artificial oxygen it would be beneficial for me to spend one night at a higher altitude. But let’s see how it all goes – considering how knackered I felt on Tuesday when we climbed up to 6,000m, which is still lower than Advanced Base Camp on the north side of Mount Everest, I wonder how hard it will be further up. It is still early days though and we are still in the middle of our acclimatisation period and the higher we go up the easier it will be the next time. 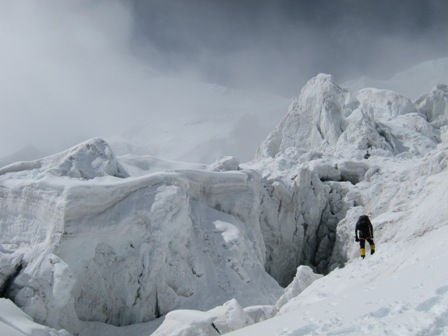 Making our way through the glacier

A day of presents

For the moment, we are enjoying our luxurious life at base camp with the kitchen team looking after us incredibly well. While we were up at Camp I, Phuri walked all the way down to Samagoan to get fresh vegetables and to collect two porters, who were bringing a couple of presents for two of our members. The first present was a guitar for Mat, who has turned out to be an incredible guitarist and the second present was a complete cricket set for Adam, who used to be a professional cricket player for New Zealand. Cricket is not really a European game and when Rene, from the Netherlands, looked at the cricket bat he asked in a baffled way: “Which side do you hit the bal with?”, which created a lot of laughter among the team.

After Mat impressed us with his amazing musical skills and we partied till the wee morning hours last night, we will probably see a game of cricket later on in the day – depending on how weather-proof our cricket team will be and whether we will find a team to challenge us!

I will be in touch again once we get back from our next acclimatisation trip which could be the last one before we attempt the summit, which should be towards the end of September IF the rains will stop.

Ellen and I on the way to CII