Warning: Declaration of wp_bootstrap_navwalker::start_lvl(&$output, $depth) should be compatible with Walker_Nav_Menu::start_lvl(&$output, $depth = 0, $args = NULL) in /home/customer/www/billibierling.com/public_html/wp-content/themes/billi-bootstrap/wp_bootstrap_navwalker.php on line 22
 Billi Bierling – Journalist and Climber | Waiting for better weather

I am sitting in my tent with the rain pounding on my roof and the downpour seems relentless and never-ending. I had heard a lot about the bad weather on Manaslu, however, I did not expect it to be that bad. On Tuesday, it poured down heavily all day and even though we had a small break in the precipitation this morning, the rain is continuing without stopping. 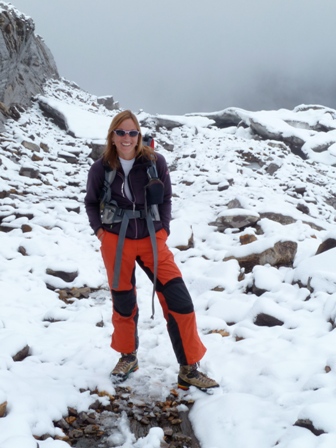 However, the bad weather does not seem to negatively influence our good moods and the team is still in high spirits. We have settled down at our base camp at 4,700m quite comfortably and I have furnished my tent with my lovely Pakistani rug, which was given to me by my colleagues from OCHA in Islamabad before I left in March this year, my yoga mat for my CORE exercise and all my other gear. I love being in a tent and even as I am writing this with the rain banging on my roof, it feels cozy or as we say in German ‘gemütlich’..

Last night, we had a bit of a party with one of our team members, Mat from Australia, revealing his talents as a guitarist and singer as he was playing some of his tunes to us over dinner. We were all quite impressed by his skills and when he told us that he had given up his rock star life for a career as a physiotherapist, we were all very surprised.

The evening went on until about 10pm for most of us, which is quite a late night in the mountains as we normally hit our sleeping bags at around 8pm. “It was such  a funny evening, I just could not leave that entertaining crew,” said Ellen Miller, who normally goes to bed very early on expeditions.

A lull in the rain

This morning the whole team went for a walk to crampon point at 4,950m and it was good to get out and blow away the cobwebs without getting absolutely drenched. However, the thick clouds won the fight with the sun once again and it started to rain in the early afternoon.

The other activity that happened at base camp was that the rest of our Sherpa crew arrived this morning and it is great to see that the team is finally complete. Our Sirdar Phurba Tashi looked very happy as he must have felt quite lonely without his team.

Dorje, Ngima, Pasang Kami, Nuru, Lhakpa Nuru, Tshering Tashi and Son Dorje had actually quite an odyssey to get here. Initially, they were supposed to fly from Lukla in the Khumbu region, which is their home, to Kathmandu, and then travel overland to Arughat and walk to Samagoan.

However, due to the bad weather in the past few weeks most flights from Lukla had been cancelled and instead of taking a 45-minute flight to the capital, the Sherpa crew spent four days walking to the roadside town of Jiri from where they took a bus to Kathmandu and then carry on to Arughat. 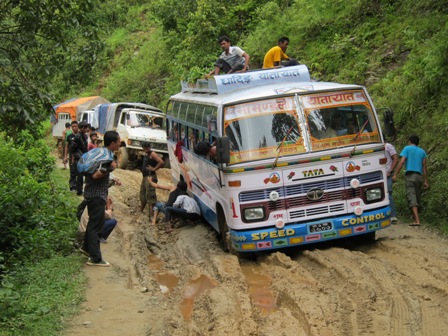 A bus stuck in the mud on the road to Arughat

And the road to Arughat is certainly not for the soft-hearted as it has been completely washed out by the monsoon and a stretch of about 50km takes about 11 hours. When we drove down that road in a big truck, Monica and I actually got out of the vehicle and walked and we still had to wait for about an hour for the truck to arrive in the next village.

The Sherpas have certainly deserved a rest, however, they will probably start working on the mountain on Thursday as they are planning on going up to Camp I to get the first load to the camp, which lies at an altitude of about 5,300m. The rest of us will do some training sessions in avalanche and crevasse rescue, and I am really looking forward to it.

I guess we will move up to Camp 1 after our Puja – a Buddhist ceremony to bless the climbers and the mountain for a good season – which is scheduled for 12 September. But until then I will try to update my website as frequently as possible, however, as I am mainly writing for Himex, you can check out the Himex website for the latest news.