This is just a brief note from Manaslu base camp, where we have just arrived after having spent a few days at Samagoan, the last village before base camp. Monica, our doctor, Lacchu, our chef, Phurba Tashi, the Sirdar, and I had a fabulous five days walking and considering that we were still in the full swing of the monsoon, we had amazingly good weather, and were not attacked by leeches at all. 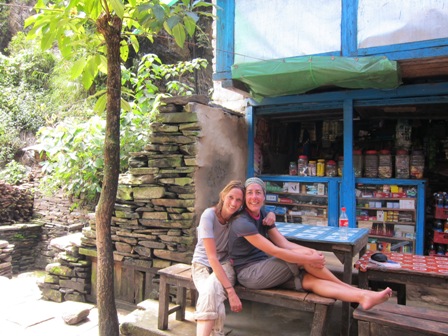 Monica and Bill taking a rest

“The only leech we saw was crawling on the ground and it left us alone,” said Monica, who had been worried about leech attacks for the past few weeks. “Even though I am glad we did not have to deal with them, the leech experience was rather disappointing.”

The facilities along the trek to Samagoan are still very basic and the only food we were served was Dhal Bhat, the Nepali staple diet of rice and lentils. However, it was not a problem as all of us like the meal and it came in many different varieties – sometimes the lentils were black, sometimes green and sometimes yellow!

It was also interesting to see how poor the people of the Manaslu region still are and that there is still a huge lack of schools and medical facilities. When we came through the small village of Bir Phedi, one of the first villages where we noticed the Tibetan influence, we saw a man who had a very bad limp. When Monica asked what had happened to his foot he told us that he had twisted his ankle a few days ago and the village doctor had treated it by burning two holes into his foot to get the bad spirits out.

Unfortunately, the spirits did not get out but a lot of bacteria got in and the man now has a very badly infected foot. Monica cleaned it with iodine and gave him some antibiotics to get rid of the infection.

It is sad to see that these things are still possible in our day and time but I guess people still die from septicaemia or simple things like diarrhoea in such remote areas. For this reason it is good to promote tourism in the region and even though the trekking facilities are still basic, I can only recommend this beautiful walk.

A glimpse of base camp

After our trek, which had taken us through a variety of ethnic groups, vegetation and scenery, we arrived in Samagoan on Thursday and the next day, the team, which seems very nice and in good spirits, trekked up to base camp for the first time. The day started off sunny and warm, however, the angry monsoon clouds came back very quickly and we were faced with a day of rain and cold and a path that had turned into a complete mudslide.

In order to get our gear up, Russell had employed the whole village to carry our equipment and every of the 96 households in Samagoan provided one or two family members to transport one load, which is 30kgs each.

“The community has worked for us for the past two years but they are getting increasingly organised, which is great,” said Russell. “This year, they gave us a typed out list with all the names of the people, who would work for us.”

We set off at 9am together with most of the villagers and there was a huge trail of barrels, plastic sheets, wooden boards and of course climbers making their way up the steep and strenuous hill to Manaslu base camp, which makes the path to Everest base camp seem like a doodle.

It took us about four hours to reach the camp at 4,700m and as the weather was worsening we just had a quick bite to eat before we descended back to Samagoan. We left Phurba Tashi, Adrian and Woody behind as they were supposed to set up some of the camp before we got back up on Monday. 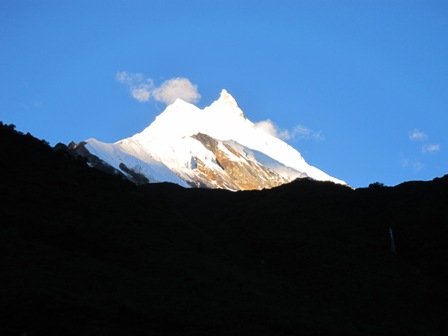 Manaslu early in the morning from samagaon

The weather has slightly improved and the hike to base camp was amazing this morning with Manaslu towering above us most of the time. It is a beautiful mountain and it is actually quite amazing to realise that it has only been climbed 453 times and that so far, no German woman has reached its top.

We will probably rest here for the next few days before we start our acclimatisation hikes, however, my acclimatisation process will probably be slightly different from the rest of the team as I seem to be the only member who is attempting this 8,163m peak without the use of supplementary oxygen. But until then stay tuned and check either this website or the Himex website on www.himex.com.