Warning: Declaration of wp_bootstrap_navwalker::start_lvl(&$output, $depth) should be compatible with Walker_Nav_Menu::start_lvl(&$output, $depth = 0, $args = NULL) in /home/customer/www/billibierling.com/public_html/wp-content/themes/billi-bootstrap/wp_bootstrap_navwalker.php on line 22
 Billi Bierling – Journalist and Climber | A new adventure in Pakistan

A new adventure in Pakistan 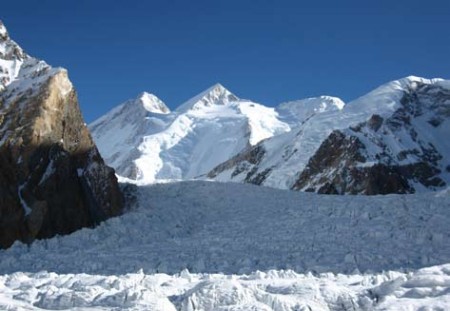 After having thought that my next adventure would take me back to Islamabad to do another three-months stint for the United Nations there, I was bitterly disappointed to find out that my contract could not get extended due to United Nations regulations. However, the disappointment lasted only for about a day or two as I quickly came up with a good alternative.

As I have to go back to Islamabad anyway to pick up my bicycle, I thought I might as well go trekking in the Karakorum. I have always wanted to go to K2 base camp and see Concordia and the Baltoro Glacier. So, I thought why not do it now when I have the time and a visa for Pakistan. But somehow – and many mountaineers will probably understand this – trekking did not feel quite enough, so I came up with another alternative plan, and I have decided to go to Gasherbrum II, which at 8,035m is the 13th highest mountain in the world.

It took me about one day to make this difficult decision but after weighing the pros and cons against each other, I came to the conclusion that if I don’t try it now, I probably never will. So I am going.

I will leave Kathmandu for Islamabad on 18th June and will spend one week in the Pakistani capital during which I will hang out with my friend, maybe do a very hot run in the Margalla Hills and, of course, do lots of CORE exercise with Ale. At an average temperature of about 47 degrees we might be melting whilst ‘coring’ but I am sure we will find a cooling glass of wine to rehydrate after the exercise.

I am very excited about the prospect of going to the Pakistani mountains and I cannot wait to see the Baltoro Glacier, Concordia and the massive Karakorum mountain range, which I got a glimpse of when I went to Skardu for two days last year.

However, as I am still planning on doing Manaslu in September I will certainly try and not tire myself out completely as I will need all my energy and strength to get up Manaslu, the eighth highest mountain in the world. But for the time being I am looking forward to firstly going back to see my friends and former colleagues in Islamabad and go and have a look at Gasherbrum II.

So watch the space for more news on Gasherbrum II, also known as GII.

Leave a Reply to Jopi (Julia)