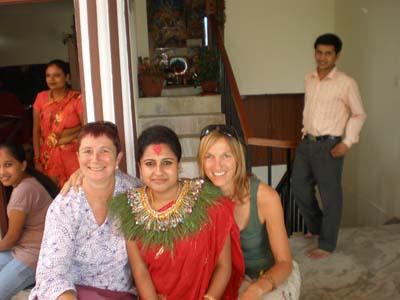 Judy, Yashoda and I at the engagement party

Last week, I was honoured with being invited to a Nepali engagement party. The girl to be married was the daughter of my good Nepali friend, Mr Puru, who I met through my even better Australian friend, Judy.

It was an interesting and very Nepali affair – and don’t think that the party was in the evening. Oh no! It was at 10 o’clock in the morning and I was in the middle of interviewing a mountaineer from Spain, who had just come back from yet another unsuccessful Manaslu expedition, when Judy rang me telling me to get on with it as we would be late. And it would be rather odd if a German were late for a Nepali party – I would say almost unheard of. I quickly finished my interrogation and jumped into the taxis with Judy and Kedar, the uncle of the bride.

The taxi ride made me once again realise, why I normally don’t take cabs in Kathmandu. It is very slow, the roads seem worse in a taxi than they seem on a bike and the way the drivers manage their cars makes me very car sick. After about half an hour (a stretch that would probably take me half the time by bike) we arrived at the party – and we were late!!!

It was a typical Nepali party, with lots of people milling and sitting around, chatting and staring at the beautiful couple that was garlanded with heaps of grass around their necks. “Yashoda does not look very happy,” I said to Judy, who explained to me that you were not supposed to look happy at an engagement party. So, we tried to make her laugh and succeeded!

After about one hour of sitting around and staring at the bride and groom, the Nepali guests were served a healthy portion of Dhal Bhat (rice and lentils) while Judy and I continue chatting. As soon as the food was swept off their plates, the guests leaped into action and left and within a few minutes, Judy and I, the celebrated couple, the parents and a few young girls were the only ones left at the party. “I guess we will have to eat our portion of Dhal Bhat now,” Judy said. I am not sure why we did not eat with everyone else, but maybe the father of the bride-to-be did not want us to leave as quickly as everyone else did. But little did he know! We quickly endeavoured a delicious plate of rice and lentils and bid goodbye to the host.

I never quite understand how Asians party but it is certainly very different from the ‘western’ way as there is not that much interaction and the focus seems mainly on the food. However, I was honoured that I had been invited to this special occasion and I hope that Yashoda and her future husband have many happy years to come.

On a completely different note, as you might have seen or heard, the last few days have seen hundreds of people summiting Mount Everest. After a long waiting period, the teams on the North and South sides have finally pushed for the summit and were mostly successful.

With 13-year-old Jordan Romero from the US reaching the summit, this year saw the youngest person to ever reach the top of the world. He climbed from the North side in Tibet, while 22-year-old Bonita Norris became the youngest Brit to get to the top from the south side in Nepal. However, she had a bit of an ordeal coming down the mountain, and had it not been for the many Sherpas and her guide, Kenton Cool, she probably would have been the youngest Brit not to survive her trip to the top of the world.

Several other interesting things have been happening on and around Mount Everest, with a Brit swimming in a glacial lake on the foot of Pumori, a 7,000-m peak near Everest, and a man being sighted at Camp 2 (6,400m) with a bicycle on his back!!

I also spoke to the Swiss team of Air Zermatt, who have just spent one month in Nepal to carry out rescue missions in the Himalaya. Their groundbreaking novelty for Nepal was the use of the so-called human sling, whereby a rescuer is being lowered from a helicopter to help a mountaineer in distress. “The Nepali pilots are very good and apart from the human sling, which is new to Nepal, there is nothing we can teach them,” Air Zermatt pilot Gerold Biner told me.

The Swiss and Nepali rescue team

During their stay, the Air Zermatt crew, together with Nepal’s Fish Tail Air, carried out three amazing rescues on three 8,000m peaks, namely Manaslu (which I am intending to climb this autumn), Dhaulagiri I and Annapurna I. They flew as high as 6,900m to rescue stranded climbers using the human sling. “I think the use of this technique will certainly improve rescue efforts in Nepal,” Biner said.

Another amazing mission was the first ever landing at Camp 2 on Mount Everest, which lies at an altitude of 6,400m. “We went there to pick up the body of Uwe Gianni Goeltz, a Swiss mountain guide who perished on the mountain two years ago,” Biner said.

There are split opinions on whether it was necessary to undertake such a high flight to recover a dead body, however, Biner thought that it was a good idea: “We did two good things. First of all, we did it for Gianni’s family and secondly, we did it for the Sherpas, who do not like stepping over dead bodies on their climb.”

The next few days will be very busy for me, as dozens of Everest climbers will be descending on the Nepali capital after having completed their expeditions. And like last year, the weather window was relatively narrow this season, which means that most teams will arrive here at the same time. However, it is also always a good time and I am looking forward to seeing the usual suspects back here in Kathmandu.