Back from base camp 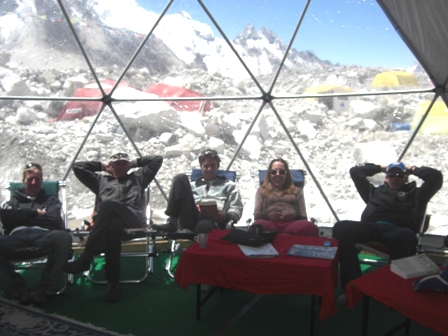 The guides and Monica, the doc, relaxing in the White Pod

Long time, no update! Well, not quite true as I have been writing for the Himex Newsletter and even though I am back in Kathmandu I will continue to be writing about the team, what is happening at base camp and more stories from the Khumbu.

I returned to the heat, pollution and dust of Kathmandu on Wednesday morning and even though it is good to be back, I really miss the clean and interesting world of Everest base camp. It has been interesting for me to be there without climbing the mountain as it gave me time to understand other things, such as rope fixing, the use of helicopters at base camp, the work of the icefall doctors, the HRA clinic, etc etc. However, during my stay at base camp, Kathmandu saw an interesting period as well.

After having endured a six-day strike, which was called by the Maoists who tried to make the prime minister step down, Kathmandu is back to normal. Shops are open, traffic is mad and the pollution almost unbearable. During the strike, shops and restaurants were only open from 6pm to 8pm and no cars, motorbikes and sometimes even pushbikes were allowed in the streets. My friend Sam told me that provisions were getting low and hotels and restaurants were struggling to get enough food to feed their guests between 6pm and 8pm.

On the sixth day, tens of thousands of people gathered for a peace rally in Kathmandu and after the Maoists noticed that the population was turning against them, they decided to call an end to the strike. It is good to see Kathmandu back to normal again, however, it is not quite clear what will happen next as the Constitution is due to be written by 28th May and it seems unlikely that the Constitutional Assembly will come up with the goods on time.

As far as the climbing season is concerned, expeditions are still on the various 8,000m mountains – be it Makalu, Annapurna I or Dhaulagiri I (13th May marks actually the 50th anniversary of the first ascent of Dhaulagiri) and teams on Everest are getting impatient as the high winds do not seem to be abating.

For me, this means that my work in Kathmandu is not that manic yet, however, once the weather window opens and teams start pushing for the summit on the various peaks, it will only take a few days for them to come back to the capital at the same time.