Life in Kathmandu has been quite hectic over the past two weeks, with dozens of expeditions coming through to climb the world’s highest peaks. For me that meant whizzing around my bike from hotel to hotel trying to catch expedition leaders guiding teams to mountains, such as Mount Everest, Makalu, Manaslu, Ama Dablam, Baruntse, etc. etc. This year seemed extremely busy and I have interviewed around 70 expeditions about their upcoming feat. However, as most expeditions have left for Everest, which is the main part of my work, it is getting quieter and rather than seeing 10 expeditions per day, I am now interviewing about three per day.

This time of year is very special for me as I meet old friends, famous mountaineers and newcomers to Nepal and everyone has an interesting story to tell. Like every year, there will be a few attempts to do a ‘first’ on Everest and other high peaks, and one of the controversial highlights is the Everest expedition of Jordan Romero, a 13-year-old American boy who is aiming to climb the seven highest peaks on each continent. So far, he has climbed Kilimanjaro in Africa, Kosciuszko in Australia, Elbrus in Europe, Aconcagua in South America, Denali in North America and Carstensz Pyramid in Oceana. This year, he has set his eyes on the highest peak in the world and if he makes it to the top he will be the youngest person ever to have done so. Due to age restrictions in Nepal, Jordan together with his mum and dad, will be climbing Everest from the north side in Tibet. He is currently in Kathmandu and will set off towards Tibet in the next few days. There will be other attempts to become the ‘first’ of whatever, and if you are interested in what is happening in Nepal this season, have a look at this article I wrote for the Nepali Times.

I have just read that plans to scatter the ashes of Edmund Hillary, who together with Sherpa Tenzing Norgay was the first person to stand on top of the world, at the peak of Mount Everest, have been called off. Apa Sherpa, who has climbed Everest a record 19 times and is on his 20th attempt this year, had wanted to honour the New Zealander by spreading his ashes on the summit. But Buddhist lamas have said such an act would bring bad luck, and there were also concerns that more people would want to leave their ashes on Mount Everest. However, spreading ashes on Everest is not a new thing and it has been done several times before. Last year, an American spread the ashes of his father on the tallest peak and I hope he did not upset the Gods. I am not sure whether the climber knew that such an act would be inauspicious but if the Buddhist lamas think that this is not right, maybe we should refrain from making Everest the highest graveyard in the world.

Other than chasing mountaineering expeditions I have had a few visitors. One is my good friend Chris Klinke, who I met in 2006 when he summited Everest. He is leading a small American expedition to Makalu and it has been great to see him after all these years. The other visitor was my ‘CORE exercise’ guru and amazing friend Ale, who I met in Islamabad and with who I shared some great moments with. She came to Kathmandu for three days to have a look at my little world here and look for some business opportunities. As I have started to teach CORE classes to my Kathmandu friends over the past few weeks, it was great to have Ale here to give me some more input and actually teach a class on the roof of our house in Kathmandu. In case I have never explained it, CORE exercise is a combination of Pilates, Yoga and even some Jane Fonda aerobics that builds up your core strength. It is an amazing way to work your whole body and build up some muscle. It has helped me with my running and swimming and I really enjoy sharing this newly-found hobby of mine with my friends. 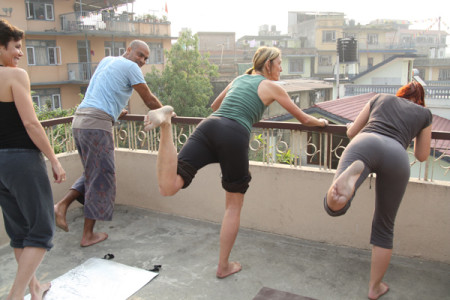 Doing CORE with my friends on our rooftop in Kathmandu

I will be off to the Everest region on Monday and getting to the airport at the crack of dawn could be interesting as the Maoists have called a nation-wide strike. The strikes, called ‘Bhandhs’, should cripple the life in the country and are often used by political groups to put pressure on the government. This time around, the Maoist are protesting the government’s decision to give the production of the Machine Readable Passport, which will be introduced in Nepal in the next few months, to India. So, let’s hope I will make it to the airport and get to Lukla so I can join Himex expedition to climb Lobuje East with them and write more articles for our Newsletter. If you are interested in any updates from there, have a look at the Himex website – I hope you enjoy it. 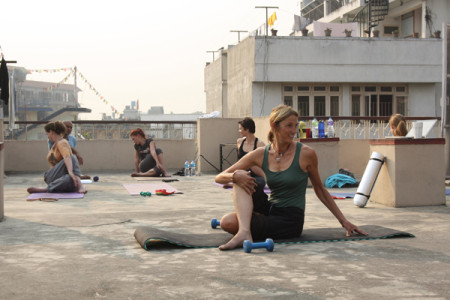 A well-deserved stretching session after having worked the muscles