Warning: Declaration of wp_bootstrap_navwalker::start_lvl(&$output, $depth) should be compatible with Walker_Nav_Menu::start_lvl(&$output, $depth = 0, $args = NULL) in /home/customer/www/billibierling.com/public_html/wp-content/themes/billi-bootstrap/wp_bootstrap_navwalker.php on line 22
 Billi Bierling – Journalist and Climber | An unintended marathon in the Kathmandu valley

An unintended marathon in the Kathmandu valley

Well, up until last week I could proudly claim that I had never run a marathon or more than 35km in my life – but little did I know that this would change after my Saturday run. I hooked up with a few people who are getting ready to run a 71k Ultramarathon race in the Annapurna region this weekend. 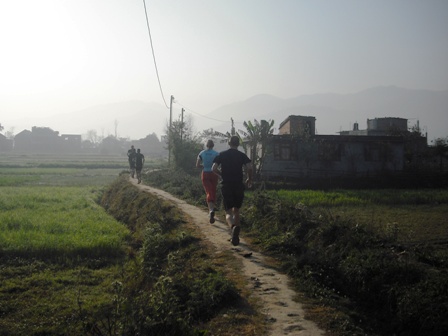 Running across the field in the early morning (Moire O'Sullivan)

On Saturday at 6am, my flatmate Richard and I biked to the Summit Hotel, where we met Roger from Holland, Moire from Ireland and Bhimsen and Rajman from Nepal.  They had told us that the run would be quite long but Richard and I thought that we could just cut it short if we got too tired. However, we were not aware of the fact that we were going to run across hills and valleys that led to the middle of nowhere from where there was literally no escape. 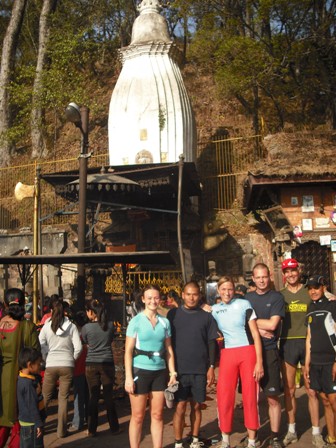 We started in Pulchowk, which is south of the polluted Bagmati River, and explored the ridge trail from Ranikot towards Panauti. It was an amazing run as it took us to places I had never seen before and when we reached an altitude of about 2,000m we could actually see the snowy peaks of the Langtang range.

Of course, we did not run the whole time and we stopped for tea, noodle soup and the best yoghurt in the valley, which was great and very rewarding. However, I always find it very difficult to start running again after a well-deserved break as my body feels stiff and unable to move fast. But even though I was the slowest of the group I managed to push myself up those hills without any major pain or injury.

We ran through dozens of villages and came across women working in the fields, men playing cards and drinking tea (yes, that is what life is like in Nepal –women work in the fields or carry the wood while their husbands just potter around), worshippers visiting Hindhu temples, goats being slaughtered, kids playing with everything that was available, and French trekkers going on a day’s hike. 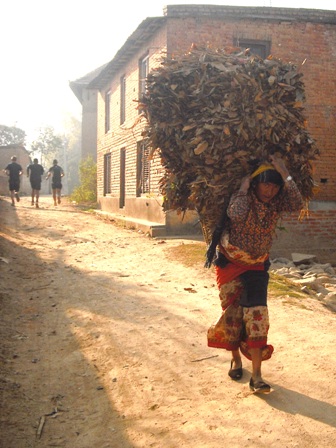 When we finished our run about six hours after we had started, we got on a bus in Lamatar near Lubhu and rumbled back to Kathmandu, where we were immediately engulfed in the smog of the city.

It was a brilliant way to spend a Saturday morning as it got us out of the Kathmandu smog, which seems worse than it has ever been and offered us the amazing views of the Himalaya, which you cannot really see from Kathmandu at this time of year. Of course, when Richard and I got on our bikes to cycle back to Lazimpat, which is north of the river, I had the feeling that I could not manage the 20min bike trip back home – but we did.

Now, I wish Richard, Roger, Bhimsen and Rajman all the best for the 71k race and Moire good luck for the 35k race this Saturday. I would love to join them, however, there are just too many expeditions arriving in Kathmandu this weekend that it is impossible for me to sneak away.