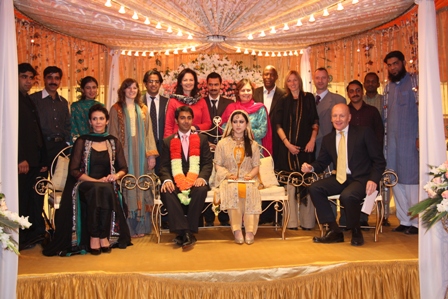 Imran and his new wife Samra surrounded by OCHA staff

If you think Valentine’s Day is only big in the ‚Western World’ then you are wrong. Here in Pakistan, people also make an effort to get married on this day, which was established by Pope Gelasius I in AD 496.
On Sunday, 14 February, our office took the opportunity to go on an outing to attend the wedding of one of our colleagues, Imran. The wedding, which was an arranged marriage, took place in Mardan in the North West Frontier Province (NWFP), an area which has been declared as Security Phase 4 by the United Nations (…just for comparison – Afghanistan is Phase 3). So, in order to attend the wedding we had to organise a convoy and once we got to Mardan, the police escorted us to the wedding venue.
Unfortunately we did not see much of the city as we were dropped off directly in front of the wedding venue, which was a huge marquee, nicely decorated with lots of roses as it would be appropriate for Valentine’s Day. My friend and core exercise teacher Ale and I were a bit later than the others as we had to put on our blingy wedding frocks in the car, and when we walked into the marquee we noticed that there were only women in the tent.
Saliha, one of our Pakistani colleagues, told us that this was the last we would see of the male colleagues as men were in a different tent. It was a Pashto wedding and male and female separation is quite strict at these weddings. And normally the men do not get to see the bride, which was a real shame as Samra, Imran’s wife, looked stunning and was simply an ‘eye-candy’.
After we were sat down at a table, the bride walked in with a few men (I guess they were her brothers as they were allowed in the female tent) and sat down on the centre stage. We still did not really know what to do but we just watched how the guests walked up to the stage, sat down next to the wife and had their pictures taken. As it had already been the third, and last, day of the wedding the bride’s smile seemed a bit tired but the guests were still sparkling, grinning into dozens of flashing cameras snapping pictures of them and their amazingly glittery wedding outfits. 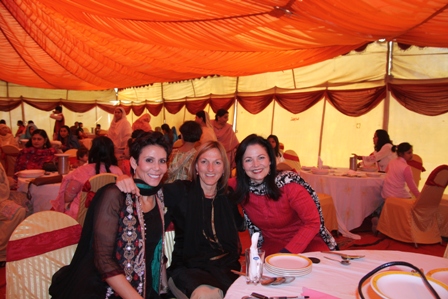 From left: Ale, Billi and Susan in the female tent at the wedding

As we did not know when we were up to face the ‘paparazzis’, we stayed at our table, hoping for the food to arrive as we were starving after the two-hour-journey from Islamabad to Mardan. But before we could dive into the grub, Imran’s nine aunts paid us a visit, welcoming us all with a huge hug as they were seemingly pleased that Imran’s colleagues, including his boss, had made the effort to come to the wedding. And then it was our turn to go up to the bride. Saliha ushered us to the stage (we were five women from our office) and we got to stand proudly next to the bride to have our picture taken. Unfortunately we did not get the chance to introduce ourselves as the next group of wedding guests were already quivering in anticipation for their turn to shine on stage.
After our little stage appearance we were served heaps of meat, some Naan bread, rice and chicken with some Mountain Dew (the Asian version of Sprite) to drink. By that time Imran still had not been seen, nor had the other men of our office – or any other men, apart from the photographers, who were running around trying to take snapshots of the wedding party. Suddenly Saliha, who was our saviour, as we foreigners would not have known how to behave at the Pashto wedding, said that we had to leave soon as we had to get back to Islamabad before dark. I was quite surprised as I hoped that we would get the chance to talk to the bride or at least see Imran. Being European I felt almost rude for going there, stuffing my face and then disappearing again. 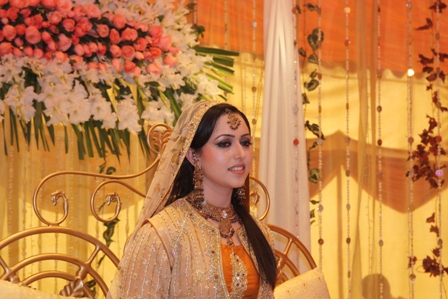 The beautiful bride Samra trying to keep up her smile

All of a sudden our male division, including Imran draped in a garland, entered the female-dominated tent, and we actually got the chance to have another picture taken, which finally reflected complete ‘gender balance’  (a term I have learned since I have worked for the humanitarian community in Pakistan) as both male and female colleagues were allowed to be on stage. However, before we had to rush off, I was happy to get the chance to quickly say ‘hello’ to the bride and thank her for the kind invitation to this cultural experience . But I still could not help myself feeling a bit weird for our short appearance on their special day as it seemed very different from a European wedding, where you spend all day together, dance, talk, eat and have fun. In a way it almost did not seem worth going all that way but then I am sure that our attendance was very special for my colleague Imran. It made me once more realise that sometimes, when things seem too much of an effort for oneself and maybe not worth it, it means the world to someone else – and it is always worth doing it.